The Sexy Screwballism of Cecil Jensen's Elmo Comic: An Appreciation 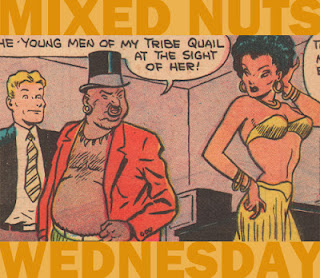 Today we look at a selection of Elmo Sunday from 1947-48, scanned from my own paper collection.

Screwball comics peaked in the late 1930s - early 1940s. While a classic screwball comic like Bill Holman's Smokey Stover ran in the 1940s and 1950s, it was actually created in the 1930s. It's rare to find a bold new screwball concept introduced in American newspaper comics in the late 1940s. Ving Fuller's Doc Syke, started in 1945, is one of the few. Cecil Jensen's Elmo (1946-61)  is another rare instance -- at least for the first 15 months of the strip, until it radically morphed into a dull kid's strip that eventually came to be called Debbie.


Starting in October, 1946, the Chicago-based cartoonist rolled out Elmo, his new daily/Sunday comic. By 1946, flip-takes and silly signs were decades old, and most cartoonists, sadly, eschewed their use. The first 15 months of the comic are something special. Jensen dances gracefully with the challenge of making a screwball comic that fit into the breezy template that Sunday newspaper comics had become. These forgotten comics are filled with inspired moments, zany ideas, sexy gals, and screwballs galore -- all delivered in an appealing visual style.

The basic set-up of Elmo in the beginning is pretty simple: Elmo works as a marketer and later VP for a breakfast cereal company called Popnuts Scrummies (perhaps the first time screwball and advertising collide?). A young, not-so-bright pretty boy filled with energy and ambition, Elmo is single and lives in a crowded boarding house that appears to be filled with near-naked beautiful women walking around in loosely-tied bathrobes. 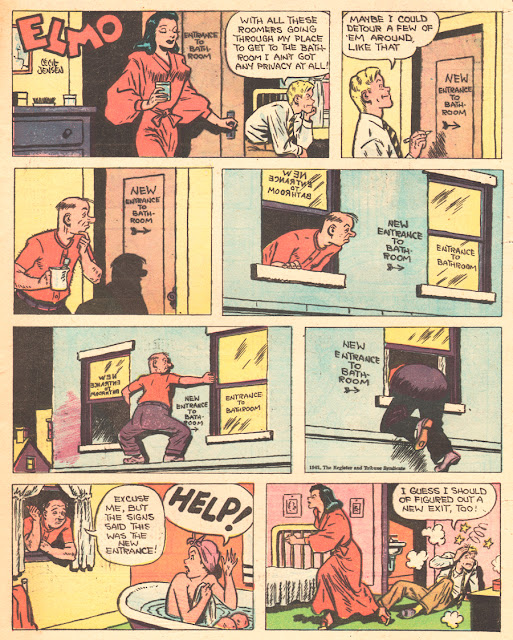 Elmo's father is deceased - but still hangs around the strip as a ghost. Here's his first appearance, in an episode adorned with a lovely bathrobe-clad beauty. 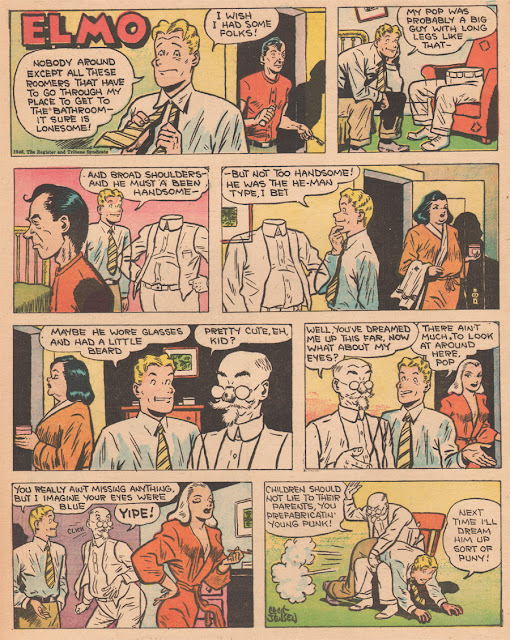 The contemporary world of Elmo is filled with nutty inventions (one of the hallmarks of 20th century screwball humor) and wacky characters. 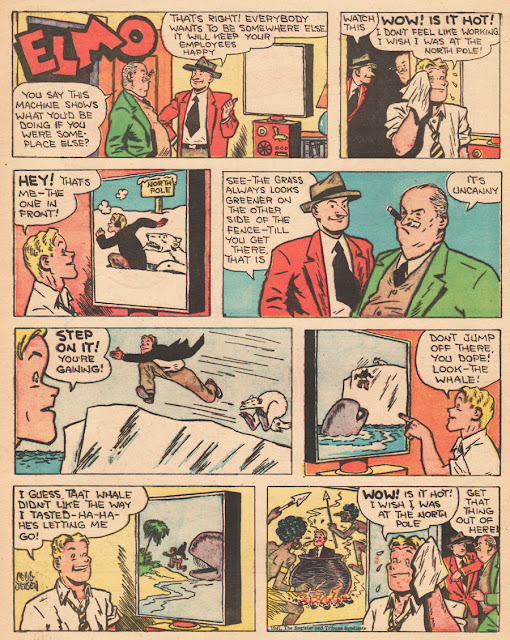 Jensen gets a lot of mileage from situations involving the advertising and promotion of the breakfast cereal. Here, he works in jungle natives and culturally-clashing ideas of beauty, with yet another sultry sexpot (how did he get away with these provocative poses in a mainstream paper?).  "Then came civilization with Popnut Skrummies!" 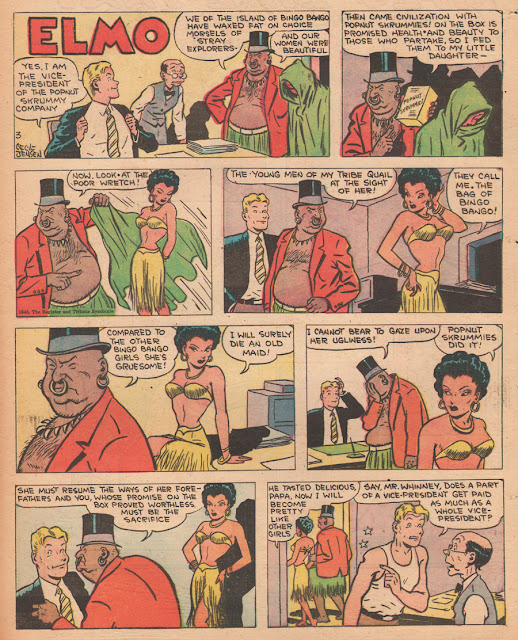 Elmo's visual solidity fascinates me. The forms in the comic are both cartoony and invested with weight and mass. Like Bushmiller, Jensen has stripped out all extraneous detail. His brush line is both simple and filled with expression (unlike Bushmiller). But what makes Elmo mildly screwball is Jensen's slanted take -- or, in the case of my next selection, updown side view of the world: 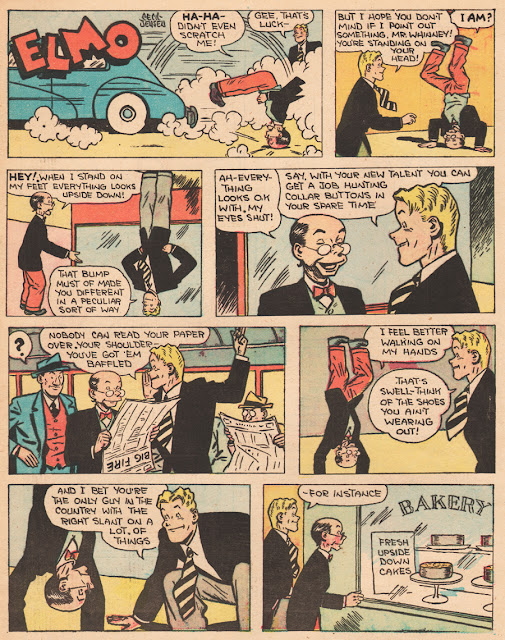 As you can see from these examples, Jensen invented a distinctive version of screwball comics for post-war America. His props and tropes are about working hard, being clean cut, and the strategic packaging of everything in America, including sex. His comic is fun because it happens at a time when all this stuff was new and fun. It's too bad that this earlier version of Elmo didn't continue. My guess is that both Jensen and his syndicate realized a more bland, less daring comic about a cute, trouble-making little girl would sell to more papers. In 1948, he introduced Debbie, Elmo's niece into the strip and she quickly took over. You can see an in-between example of this morphing at Jeff Overtuff's blog here.

Eventually, Elmo and his screwball Popnut Scrummies/boarding house world vanished. Like Elmo, Jensen had to please the public -- and he sank into the mire of the general public's mediocre taste. Here's an example of Debbie, what Elmo became:

In my last example of the "good" Elmo, Jensen makes a meta-reference to "screwball inventions," and delivers a parody of screwball comics that is literally over the top: 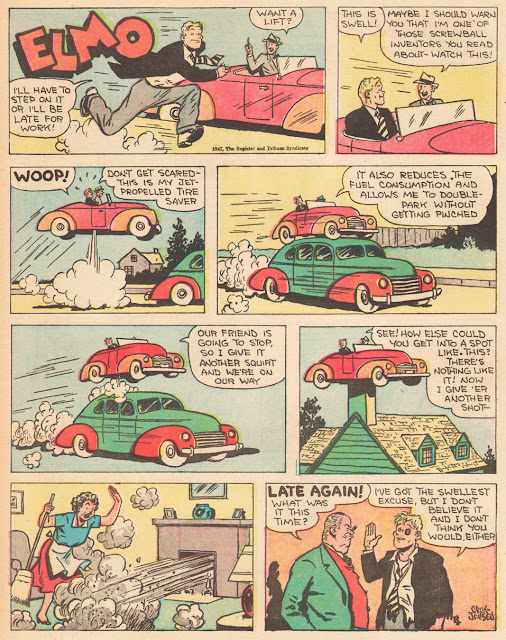 Hope you enjoyed this appreciation of a fine, forgotten comic! You can find more about Cecil Jensen and Elmo in Dan Nadel's landmark book (which I recommend to all readers of this blog), Art Out of Time: Unknown Comics Visionaries 1900-1969.

A big box o' Popnut Skrummies to my pal, Frank Young, for turning me onto the antics of Elmo! Thanks, Frank! And while I'm at it, I'll just put in a plug for the brand new, amazing graphic novel by Frank Young and David Lasky, The Carter Family: Don't Forget This Song, which became available in stores yesterday! 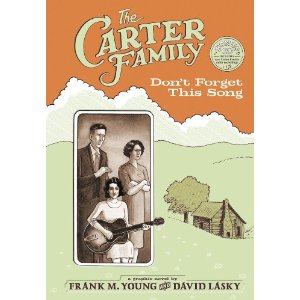 This 190-page hardcover fill color graphic novel was years in the making. It tells the story of the first family of country music, the Carter Family, who gave us such standards as "The Wildwood Flower," and "Can the Circle be Unbroken." Johnny Cash's loving wife and partner, June Carter Cash was a member of this family (Johnny and June appear very briefly in the book).  Young and Lasky tell a compelling story of American life in the early 20th century that is as mysterious and hauntingly elegant as morning mist shot through with sunshine. Plus, the book comes with a CD of rare Carter Family radio broadcasts! A beautiful book, a solid read, and some tunes. Highly recommended. You can order it on amazon here.