The Weirdness of Kids, Family, and The Physical World Explored in the Nutty Comics of Frank Owen 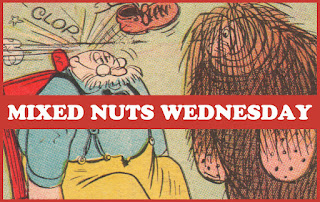 Here's a look at the comics of yet another forgotten screwball master - Frank Owen. I have been accumulating and studying Owen's comics for some time, now. Spending some time in the wacky world of Ossie Tittle, Jasper, Philbert, and Bumpy Bear is weird, but rewarding.

Owen's cartoons appeared in both newspapers and magazines from the 1930s through the 1960s, with his prime screwball work starting in 1935 and continuing to 1943. You can find more biographical information on Owen, as well as additional examples of Owen's comics, at comics historian Allan Holtz's blog, here. (Allan Holtz -- who is in Florida while I am in Seattle --  has also been posting about Owen this week, so I thought we'd make this week coast-to-coast Frank Owen Week). Here is a newspaper article on Owen that appeared in 1936, promoting the start of his first syndicated comic strip, Ossie Tittle.


As the above article mentions, Owen's first success with in the "5 cent magazines," with a panel called, in the best screwball comics tradition, Philbert (code for "nutty"). Here's a couple of nutty Philberts:

Like other screwball masters, Owen has his own modus operandi. We'd expect nothing less from a true practitioner of the screwball school. In the tear sheet below, we learn that Owen believes that "nine out of ten people enjoy a joke which evokes explosive laughter rather than one which requires figuring out." This may well be yet another definition of screwball comics.

Owen's concerns are less about technological and social trends (as we find in the works of many other screwball cartoonists), and more about the strangeness of the physical laws we accept so completely. Why do little kids always have to weak and vulnerable -- what if a kid was actually much stronger than an adult? What if an otherwise average man had the ability to sleep almost constantly, or eat anything, or was strong enough to carry a horse on his back -- what would that look like? Start turning these questions over in your mind, and you have sauntered down the twilight path that leads into the wacky world of Frank Owen.

Here's a rare Sunday page of Ossie Tittle and the topper Bumpy Bear, scanned from my collection. The Bumpy Bear is totally charming, and seems to be loosely built around the idea that an old gent has a bear cub for a pet. The Ossie Tittle offers a truly screwy, perfectly Owen style cartoon hypothesis: what if nightmare creatures had a real physical appearance? 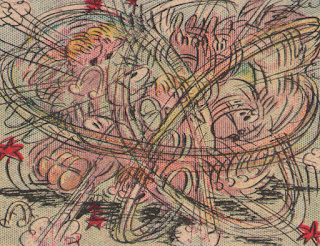 Here's a daily Ossie Tittle that offers a variation on the above nightmare-creatures-are-real gag:


The visual formula Owen worked out for his characters is as bizarre and non-representational as the empty eyes of  Little Orphan Annie, the inflated forearms of Popeye, the hook nose of Dick Tracy, or the Brillo pad hair of Nancy. However, Owen had a very unique sense of humor that makes his comics less accessible than they deserve. I have sometimes wondered if perhaps, on a subconscious level, his characters hit too close to him visually, as many Americans are now overweight and overwhelmed. If humor is a way of coping with difficult changes, then perhaps Owen's cartoons are a gentle satire of American excess. 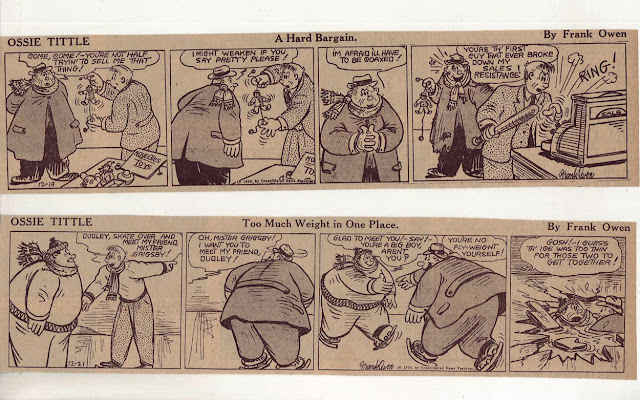 Ossie Tittle has zero continuity. One day Ossie was a policeman, the next a grocer. Owen's canvas is broad, perhaps developed from his many sales to leading American magazines, and he also delivers some terrific wacky animal jokes, such as these one:

Ossie Tittle also featured a large cast of eccentric characters, mostly relations of Ossie's. Here' we see a hobo member of the Tittle family that has ridden in the racks under trains so much that it shapes his every action:

Much of the humor in Ossie Tittle centers around the super-human strength of the title character:


Ossie Tittle ran for a little over a year, from January, 1936 to March, 1937, making it one of the numerous comics that a syndicate (in this case, Consolidated News Features) tried for a year and then abandoned to the dustbins of history. The unique formula Owen worked out continued, in a much longer-lived cartoon, his Jasper panel, which ran from 1937 to 1943, and was merely a renamed version of his earlier Philbert panel. Here, we see Owen recycling a 1936 joke for his 1939 comic.

A case could be made for Ossie Tittle and then Jasper being among the first comic strip superheroes, along with Popeye and Superman, who both came along around the same time. Like Ossie, Jasper has superhuman strength and is seemingly invulnerable. He is also kid-like, with a child's curiosity and creative resourcefulness. This leads to an infinite series of startling comic scenarios, as we see in this selection of Jasper panels from 3 consecutive days: 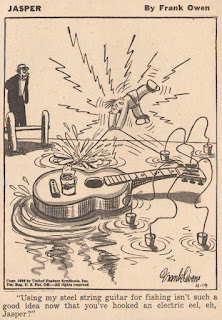 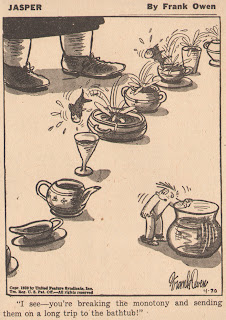 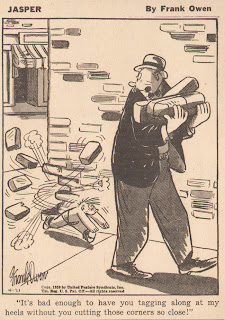 Owen draws Jasper as a little man naked except for a diaper, socks, and shoes. Jasper is devoid of neotony, and the result is slightly unsettling. However, I think Owen was on to something. I think Philbert and Jasper are both comedies that reach forward into time, sensing the shift in the way mid-20th century Americans raised their children. At its best, his kid panels are doorways for us adults to momentarily step back into the weird mindset of a child, when it makes total sense to line up a row of water-filled containers as a path for a pet goldfish.

With Ossie Tittle, however, Owen had a broader and richer vehicle, in which the oddness of the child mind was only one theme among many, including the weirdness of family, and the spikiness of being an adult. It's too bad the strip didn't continue, as I suspect it could have evolved into one of the great American newspaper comics, instead of a slim chapter in the history of American screwball comics.

I'll end with another rare color Sunday, which is also another incredible screwball joke derived from riding a horse (Owen's cartoons are at once anachronistic and forward-looking).

Thanks for reading,
Paul Tumey