Egad - You Do Not Evince The Slightest Interest In What I Am Telling You: An Our Boarding House Sunday (1926) 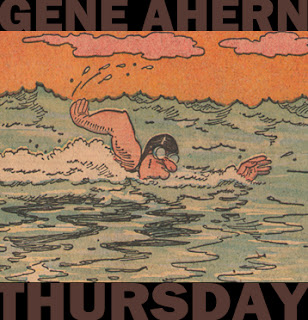 Carrying on our glances at Gene Ahern's Our Boarding House, here's a very early Sunday, scanned from my collection. Haw, this page is so massive, m'lad, that it required no less than three passes on my 11x17 scanner to capture the breadth of its majesty.

But size isn't all that matters in comics - kaf um - and this example is satisfyingly goofy and funny, using the device of a stout Major Hoople envisioning himself as an accomplished athlete.

The second and fourth panels of this page are funny wordless flashes into the Major's imagination, both heroic and screwball.

The Major's nose is huge, reminding me of Gilbert Shelton's penchant for similar proboscises, which once again underscores the invisible thread between Ahern and Underground comics in America.

The comic beauty of the sequence lies in our peek into the Major's soliloquy of relief when his young charge is distracted from demanding the Major give him a swimming lesson -- even though Hoople's head is filled with dreams, he is keenly aware of his reality.

This is the only example I've seen with this striking, if weird, title art.

I hope you enjoyed this lovely page. Drop me a line if you care to: paultumey@gmail.com