The concept for Brad Bradford's Jingling Johnson (1907-1911) seems tremendously appealing to a screwballer like me. Johnson appears to only be able to communicate in rhymes -- often nonsense verses. In each strip, his poetic expression comically escalates as his audience's disfavor also increases, resulting in a climactic clash.

Thanks to Allan Holtz for discovering the work of Bradford. I learned about Bradford in Holtz's great new book, American Newspaper Comics: An Encyclopedic Reference Guide, which I highly recommend to any comics researcher. You can learn more about Bradford in this post on Holtz's Stripper's Guide blog.

Here's a few more Jingling Johnsons (which, I must admit, are highly addictive), harvested from microfilm. These appear to be reprints that appeared in a Texas newspaper in the early 1920s. Hard to read, but worth your time (many thanks to Daniel McKiernan for cleaning these up): 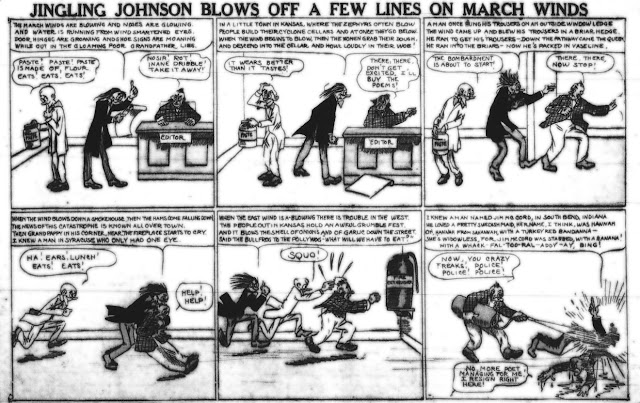 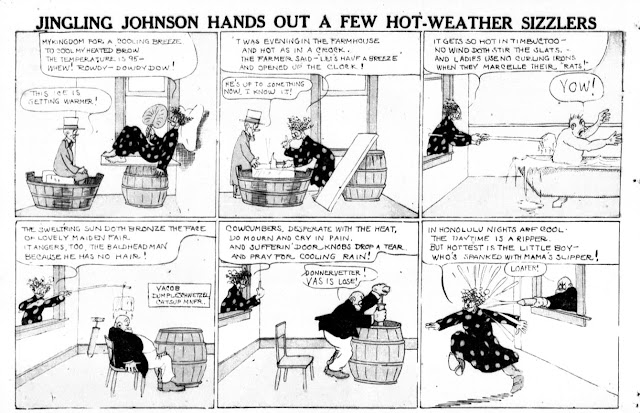 Bradford had a large cast of screwball characters in the numerous strips he did for the North American Syndicate. He sometimes crossed his characters between strips, as in the next example, which includes Doctor Domehead, who had a strip of his own for a few months a couple of years prior to Jingling Johnson.. 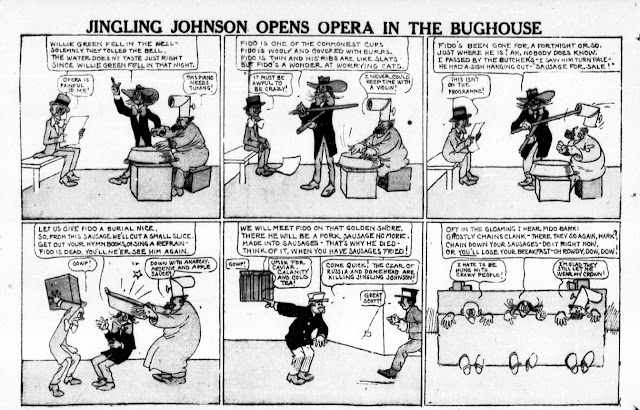 This last example is a particular tour de force, as we see that Jingling Johnson's entire family suffers from the rhyming obsession, turning a family picnic into an exercise in insanity! The picnic ends in conflict as "family meetings often do." A bit of wisdom about family dynamics is at the core of this screwball comic. The cross-eyed characters resemble Milt Gross' comics. The episode ends with a self-reference: " the comic artist needs the coin." 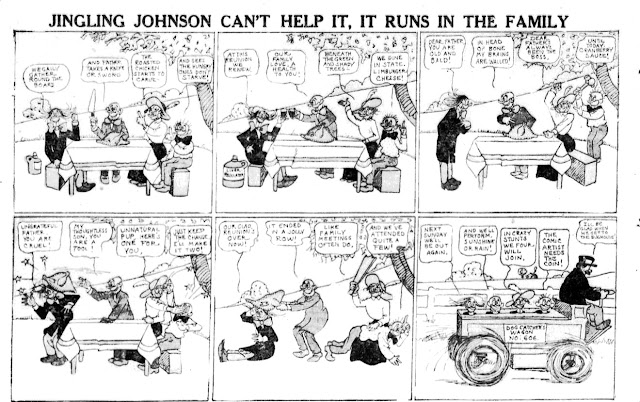 Forgive me this brief post today
I fear I am under the weather
When I am well cucumbers will shout hooray
and I will once again delight in the hamster feather
That is all,
Screwball Tumey Paul
Posted by Paul C.Tumey at 12:53 PM