Dreaming While Awake in The Squirrel Cage (1946) 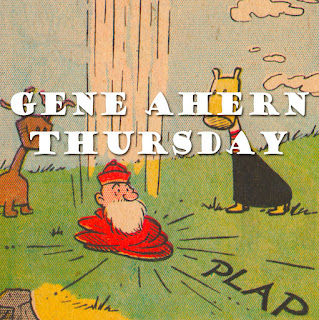 Gene Ahern Thursday
A new comic every Thursday by the master of comics surrealism!

You have to take a few minutes to savor this amazing example of The Squirrel Cage.  Last week,  in my last Gene Ahern Thursday posting, I discussed  how Ahern put dreams and surrealism into his supposedly "normal" Room and Board comic strip. I said that Room and Board, and its topper, The Squirrel Cage are meant to be read together, as an ongoing conversation about form, fantasy versus reality, and the surprising pliability of linear narrative.

Today, I am pleased to present the other side of that conversation -- a Squirrel Cage about dreaming while wide awake. This strip is a perfect inversion of the dreams of Judge Puffle. Is the Judge dreaming about Foozland, or is Paul Bunyan (that's the red-suited gnome) dreaming about Puffle's reality? Of course, in Foozland, the only way to stop dreaming is to go to sleep...


It's no surprise that Ahern ends with a Native American totem pole. He is channeling the icons of the old, weird America and the time before that into this story. The Squirrel Cage sits somewhere between George Herriman's Krazy Kat and E. C. Segar's Popeye. It is a much under-appreciated, and virtually unknown comic that deserves greater attention. I've said this many times, but it's worth saying yet again: Ahern's Foozland continuity may well be one of the last great American newspaper comics sequences to be discovered.