The Surrealism of Everyday Life: Ahern's Room and Board 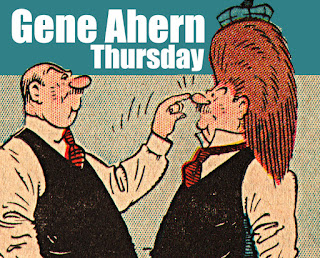 I am convinced that Ahern meant for Room and Board and The Squirrel Cage to be read together, as an ongoing conversation about form, fantasy versus reality, and the surprising pliability of linear narrative. It also seems likely that Ahern, who lived just outside the hills of Hollywood, CA experimented in the 1940s with various substances, opening what Aldous Huxley famously called "the doors of perception."

Gene Ahern is mostly forgotten. If anyone recalls his work at all today, they think of  gentle, character-driven humor panels about eccentric characters in a stuffy, dingy boarding house that seems to be perpetually stuck in the 1920s. In other words, if there's any perception about Ahern's work at all, it's usually an association with old-fashioned, and rather dull comics. That is certainly the opinion I had in my mind until I actually started to read his work. In fact, I must confess that I had no idea that the mediocre, mildly amusing Our Boarding House comics I grew up reading in the 1960s and 70s were not even by Ahern, who died in 1960.

The rediscovery of Gene Ahern's work is certainly one of the prime missions of this blog and my book project, as is the rediscovery of the forgotten work of other screwball masters such as Milt Gross,Ving Fuller, George Swanson, and -- as incredible as it may seem -- the famous but misunderstood Rube Goldberg, who was as weird and brilliant from 1910-1930 as Winsor McCay and George Herriman, if not more so at times.

Even though he created a huge hit with Our Boarding House, which ran for 65 years, Ahern only worked on the series for 15 years, from 1921 to 1936 (source: American Newspaper Comics, Allan Holtz). In 1936, he was lured away from the NEA syndicate to the Hearst-owned King Features Syndicate, where he created a copy of his hit strip, called Room and Board (or sometimes Board and Room).

Despite all appearances and expectations, Ahern's boarding house comics are filled with surreal humor. The only similar body of work in American culture to Ahern's middle-class screwballism would be the films of W.C. Fields, which surely must have been at least a sideways inspiration to Ahern.


But enough scholarly gabbing. Let's get to da comics! Here's two stand out examples of Ahern inserting knockout screwball surrealism into Room and Board. In both examples, there's a nod to Winsor McCay's Little Nemo in Slumberland, with the dreamer waking up in bed in the last panel.


I recently had the pleasure of viewing the original art to the above strip, which is in the collection of Carl Linich. I was struck by how rigid the line and forms in the strip are, which provide containment for the wacky screwball humor.

This next dream comic is one of my all-time favorites.


The translation of the Eskimo's speech in the next-to-last panel is almost certainly a lift, and a tribute, to one of Ahern's prime artistic mentors, Rube Goldberg. Goldberg populated his comics with such nonsense words as the Eskimo's speech here, and then offered us translations in the exact same manner as we see in this panel. In 1926, Rube even built new character around this device, the delightful Bertha The Siberian Cheesehound:

Of course, Ahern built The Squirrel Cage around the nonsense language of the Little Hitch-hiker, whose constantly uttered ultimate question, "Nov shmoz ka pop?" remains untranslated to this day. 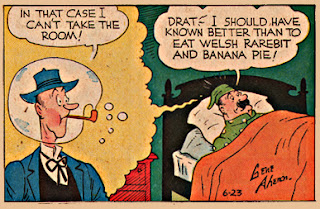 In the last panel of the 1946 Room and Board, Judge Puffle mentions "welsh rarebit." This is a nod to Winsor McCay's famous comic Dreams of the Rarebit Fiend. Years ago, driven by my curiosity, I found a recipe for welsh rarebit (in the fabulously eccentric and wonderful book Bull Cook and Other Historical Recipes by George Leonard Herter), and made up a batch. It's basically beer-soaked cheese toast -- and, although I didn't have any wild dreams, it certainly is a rich repast to digest.

I love how, in the last panel, the boarder blows a soap bubble that encompasses his own head. The soap bubble resembles a speech balloon, and in Magritte-fashion, Ahern has created a masterful surreal self-reference.

Whether readers of 1946 caught any of Ahern's references to the great comics of the previous generation, or appreciated the brilliance of his verbal and visual meta-references and puns, is a matter for speculation. I have yet to find a critical appreciation of his work from the 1940s that shows a full understanding of the work, but I suspect that readers back then were probably more sophisticated than we would like to believe.

*Translation: "till next time fellow screwballists,"
Posted by Paul C.Tumey at 11:29 AM

Email ThisBlogThis!Share to TwitterShare to FacebookShare to Pinterest
Labels: Gene Ahern: Room and Board, Thursday