A Stunning Squirrel Cage Original in the 1939 Merlin Continuity 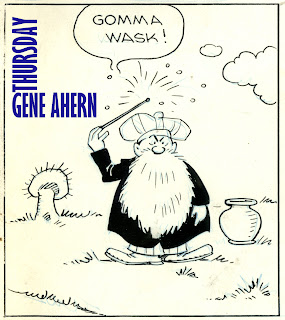 As part of our Original Art Week, we present a stunning, large scan of a Gene Ahern original Squirrel Cage. This scan is generously supplied by the owner of the art -- thank you!

This episode is from the 1939 Merlin continuity. Starting January 8, 1939, and continuing through approximately the first half of the year, this sequence was Ahern's first sustained exploration of the possibilities of deriving comedy from magic. A few years later, when he started the 7-year long Foozland continuity, he built an entire world around the tropes of magic and fantasy.

In short, the continuity starts when our two inventors have become so annoyed with the constant presence of the tam-adorned, busy-bearded hitchhiker in their neighborhood that they have begun to plot ways to rid themselves of his presence. A magical wizard, dressed for the part in robe and pointy hat,  knocks on their door and offers his services. Here's the first episode of the Merlin continuity in The Squirrel Cage, from digitized microfilm:


Things do not proceed as planned (of course), as we see in the next episode:

And we're off the races. The Little Hitch-hiker (as the characters refer to him) now has the magic wand and all heck is breaking loose. Ah, but Merlin has another magical resource: a jar of magic sand...


As you might imagine, the Little Hitch-hiker effortlessly triumphs at every turn as Ahern brilliantly spins out this continuity over the next few months. And now, here's our original art piece, from about 6 months later:

This is a particularly brilliant episode, with some choice additional nonsense words from the Hitch-hiker:

Apparently, Merlin has moved in with the inventors as he tries for months to get his wand and magic sand back from the Little Hitch-hiker. Exhausted and nerve-wracked, he decides to go fishing. On the way out, he hurls an angry insult at the Little Hitch-hiker and suffers the consequences.

Here is the page panel by panel, with larger scans of the art. In this format, you can clearly see Ahern's penciling under-layer in blue. For those that don't know, this shade of blue was not picked up in the printing process, and so many artists drew in "non-repro blue" to save themselves the chose of erasing their pencils. As we see here, it appears that Ahern didn't stray much at all from his original penciled conception, although he adds a great deal of fun detail in his inking.

Here we see the logo of the strip is pasted in from a photostat -- a very common practice. There are discolorations from the glue or tape used. 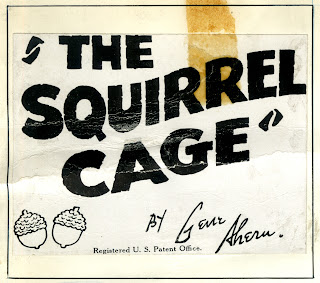 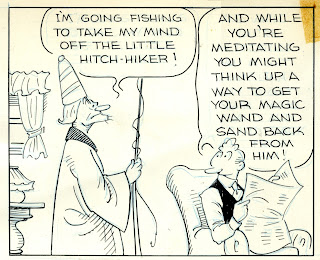 What an insult -- and what stupidity! The Little Hitch-hiker has both the magic wand and the jar of magic sand. One ought not to mess with a hitchiker who has magical powers! 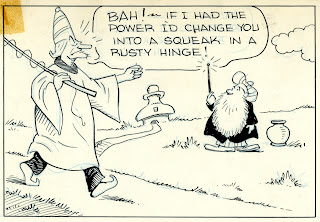 I love the ungainly flying bird in this panel... 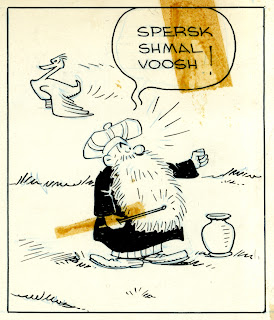 The tree/mushroom and the jar in this panel are Herrimanesque... 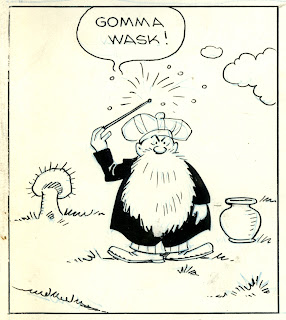 The next 3 panels are wordless and beautifully depicted as a visual sequence. We are "hooked" as we wonder what the Little Hitch-hiker is up to. Love dat old-style diving suit.
\ 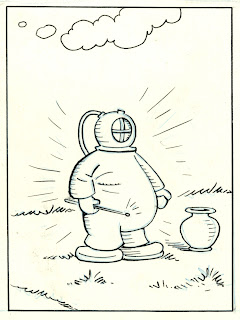 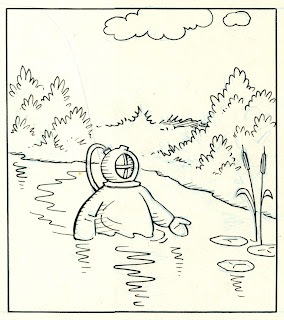 It slays me that we get a blurble of the Hitch-hiker's mysterious language underwater. Look at how Ahern draws the speech bubble as bubbles... a sort of in-joke. 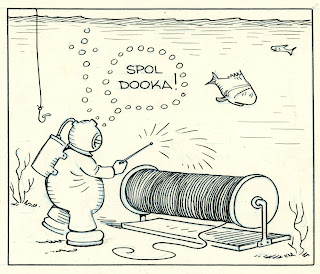 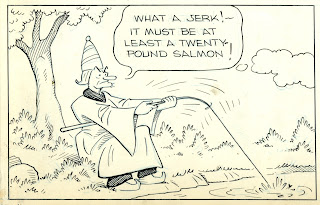 In this panel you can clearly see the "slug," which is the pre-printed copyright strip pasted in. The glue used to paste it in has yellowed over the years. 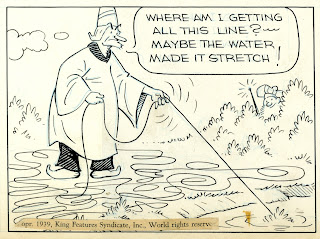 The brilliant meta payoff and Ahern reminds us that comics are just lines on paper... "is there no end to it?" 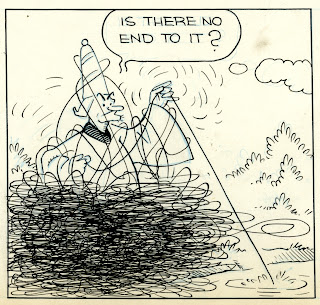 And... bingo... a return back to the eternally baffling and funny catchphrase -- so great! 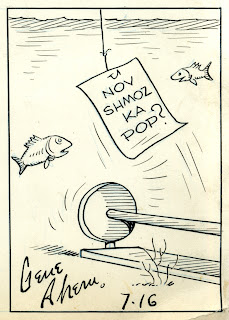 I hope you enjoyed this wonderful opportunity to savor the original art of a screwball master!