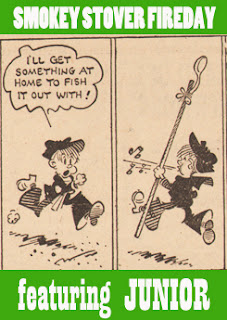 Here's a look at Bill Holman's pre-Smokey Stover kid humor comic strip, Junior. The daily strip (there were no Sundays) ran from May 28, 1923 to 1931 and was distributed by the New York Tribune syndicate*. Junior was also called Gee Whiz, Junior, Junior Wise Quacks and just Wise Quacks. Smokey came along about 4 years after Junior folded.

Holman wrote and drew Junior for about eight years. Today, the strip is largely forgotten, probably because it is nowhere near as funny or screwball as Smokey Stover. It's a well-crafted comic strip, but for anyone familiar with the madcap Smokey Stover, it's a huge let down to read the dull Junior comics. Basically, Junior was an average kids strip, with only the occasional indication of the flood-tide of wackiness to come in Holman's later comics.

Here's three examples, in poor microfilm quality, from 1924, when the strip was not even a year old. You'd be hard-pressed to identify it as the work of Bill Holman at first glance, because it's a surprisingly straight pitch, and not screwball at all.

Holman appears to have based his character on the successful comic Smitty by Walter Berndt, which started about six months prior to Junior, in November, 1922*. Here's a Smitty from the 1920s that shows the marked similarity in character design, although Smitty had some continuity and was a much better read.

Junior appears to have been kind of gilded cage for Holman. It's entirely likely that the New York Tribune syndicate asked Holman to create a strip like Smitty, which was owned by their rival, the Chicago Tribune - New York News syndicate. Holman had a big time syndicated strip, and he probably made decent money... but he was as suited for drawing a charming daily kid's gag comic as Salvador Dali was for painting Saturday Evening Post covers.

At least, as time went on, Holman developed his characteristic pen technique, with expert hatching,  and perfectly spotted blacks.

Junior's only merit comes in the occasional surreal gag and in the extra pun-filled panel comic, Wise Quacks, that Holman added, in Rube Goldberg fashion, at some point. In 1930, Holman's puns are in prose form. The genius of Smokey Stover is that, five years later, Holman shifted to delivering a tsunami of puns in visual form. Junior and Wise Quacks are basically Smokey Stover with the wacky dial on 1 instead of 11.Here's a series of Junior dailies from 1930, late in the strip's run. These are paper scans from my own collection. 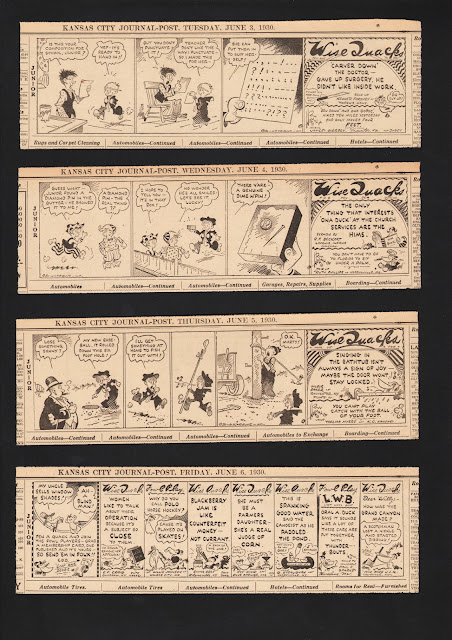 You'll note that the Friday, June 6 strip is given over to all Wise Quacks. At least in 1930, if not earlier, Holman did this every Friday. The Friday Wise Quacks foreshadows the jam-packed screwballism of Smokey Stover, and we see Holman playing with little visual puns in the panels.

Here's a couple more Juniors that have a touch of surreal madness in them, anticipating the fun to come! 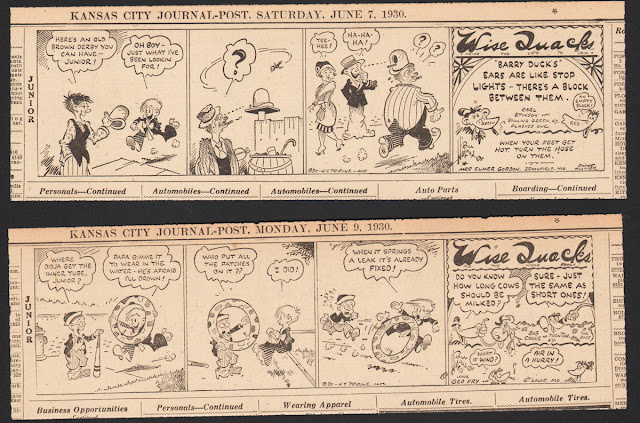 After Junior took his toys and went home, Holman embarked on a very successful career as a free-lance magazine cartoonist for about four years. Then, he heard that a syndicate (Smitty's syndicate, actually - the Chicago Tribune - New York News syndicate) was looking for a new strip about a fireman, and he had an idea that finally let the screwball dogs out! But that's another story, one which is told in my article The Birth of Smokey Stover - First Puffs 1935.