The Hilarious Hypocrisy of Banana Oil by Milt Gross (1925) 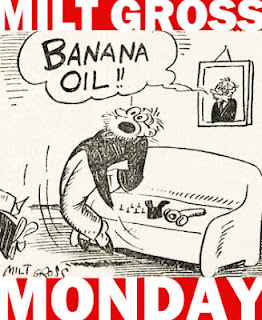 Today we peel our eyeballs for a potent trio of extremely rare, early Milt Gross Banana Oil dailies from 1925.

The concept of Banana Oil was to show in each episode the difference between what people say and what they actually do. The phrase, "banana oil," is slang for "bulls--t." It was, in many ways, Gross' first success, capturing the many different shades of human dishonesty in a friendly, comically brilliant way. Each episode gave us different characters and different situations.

In this respect, Gross was extending the "concept strip" form that Rube Goldberg, his artistic and spiritual mentor, primarily developed in the United States with such popular series as Foolish Questions and I'm The Guy. In fact, Rube Goldberg had several series about human hypocrisy, including Telephonies, Phoney Films, and No Matter How Thin You Slide It, It's Still Baloney.

"Banana Oil was more myself than anything else I've ever done. It contained all that I feel about life and the bunk that the world is so full of. I poured out my heart in it -- strange though that may sound." - Milt Gross, 1926


The 1926 article from Success magazine by David Balch describes Gross as "a very energetic young man possessed of a withering contempt for four-flushers."

Gross' daily set the pattern for his work to come, with a crazy kaleidoscope of ever-shifting characters and situations, all drawn with an appealing screwball energy. Here's three selected Banana Oil dailies for your henjoyment.

First up is a great example of hypocrisy through self-delusion:

Next is an example of someone who is well-aware they are being deceitful, but comically tries to cover-up. It's also a nice chance to see Gross draw pin-up girls.


Lastly, here is an example of "the public" calling BS -- in a comic that graphically anticipates the extraordinary, everything-but-the-kitchen-sink type panels of unrestrained screwball chaos, as can be seen in  his April 5, 1931 Count Screwloose Sunday (you can read that comic here)

That's all for today. I need to go count the piles of money rolling, get  my morning massage, and have Hives, my butler serve me lunch.**