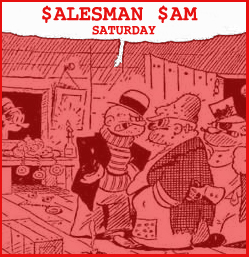 Here's a wonderfully wacky $alesman $am screwball crime saga from 1925 by the criminally under-appreciated George Swanson.

In his five-year stint on $am, George Swanson (who signed his work "Swan"), developed several mini-continuities. Often, these mini-stories were broad satires of popular genre forms such as westerns, love stories, crime dramas, etc. In the brief 1925 sequence below, Swanson unfolds an adventure for Sam in which he tangles with cutthroat thieves. In true screwball fashion, Swanson is more concerned with gags than suspense, and so he continually breaks the story-form in order to inject his jokes. Sometimes, it's the disruption of the crime story that is the best gag of all, somewhat like Al Capp's Fearless Fosdick and Art Huhta's Dinky Dinkerton, both of which came along about 15 years later. There's a conspiratorial awareness by both Swanson and the reader that the typical crime story has been satisfyingly stretched. The drawings are lively, the pace is breakneck, the background details are legion -- all-in-all, a classic screwball sequence!

In the middle of the chase, Sam plays out a vaudeville gag routine...

How NOT to shadow a suspect:

Our brave, capable hero is in fine form:
As if the crime drama wasn't enough, Swanson introduces a new character:
As a result of the adventure, Sam has been promoted to partner. Love that crowd scene.

That is all,
Prosaic Paul Tumey
Posted by Paul C.Tumey at 9:42 AM