The Secret History of Screwball: A Squirrel's Progress (April 8, 1945)

Major Hoople's Guide to the Island of Jujuwok (1931) 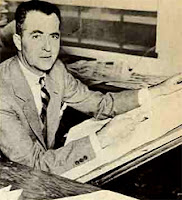 Gene Ahern (1895-March 6, 1960) created a number of screwball comics and is one of the prime masters of this genre. His screwball comics include: Squirrel Food (circa 1915-22), The Nut Brothers (1921-36), and The Squirrel Cage (1936- circa 1952). His most popular and well-known comic, Our Boarding House (1922-36), is a toned-down version of his screwball approach, offering a winning character study of a puffed-up old eccentric windbag, Major Hoople and his many eccentric associates.  Ahern had a popular hit with Hoople, scoring a 14-year run at the Newspaper Enterprise Association syndicate (NEA).  The rival King Features syndicate hired him away in 1936 at a considerable salary increase. Ahern then created Room and Board, an even funnier version of Our Boarding House featuring Judge Puffle. He wrote and drew this comic until his death, in 1960.

Our Boarding House and Room and Board have  screwball elements but are not exclusively screwball comics. However, there are numerous notable single examples of these comics which offer excellent screwball comedy, some of which will be shared on this blog for the first time in over 70 years.

For the topper of Room and Board, Ahern created one of the greatest screwball comics of all time, The Squirrel Cage. This comic was a prime influence on Robert Crumb, who modeled his 1960's character, Mr. Natural, on the little hitch-hiker who often appears in The Squirrel Cage. Known primarily to collectors today, The Squirrel Cage and the rest of Ahern's work remains relevant and funny to readers today.

June 19, 1936 - April, 1960*
Room and Board (sometimes labeled Board and Room)
*Note: it is currently unknown when this comic ended. Maurice Horn writes that Ahern drew the strip until his death in 1960. The latest verifiable date is August, 1952.

OTHER WEB RESOURCES ON GENE AHERN

BOOKS AND ARTICLES ON GENE AHERN

Our Boarding House with Major Hoople 1927
(Algrove Press, 2005) A complete run of daily panels from 1927. Well-crafted book, great reproduction, and terrific, funny comics. As of this date (April, 2012), the book is on sale for a mere $6.95. A bargain any comics fan should snap up. Order from Algrove Press here. (Algrove also offers several books of J.R. Williams' Out Our Way strips - not screwball, but still great cartoons and otherwise unavailable anywhere). Highly recommended.

"The Nut Brothers" (Nemo The Classic Comics Library - Annual #1: Screwball Comics) - Brief text by Nemo editor Rick Marschall, with b&w selection of Nut Brothers and The Squirrel Cage. For many screwball fans (myself included) this was the first -- and for many years -- the only look at Ahern's screwball greatness available anywhere.


A Gallery of Gene Ahern Comics