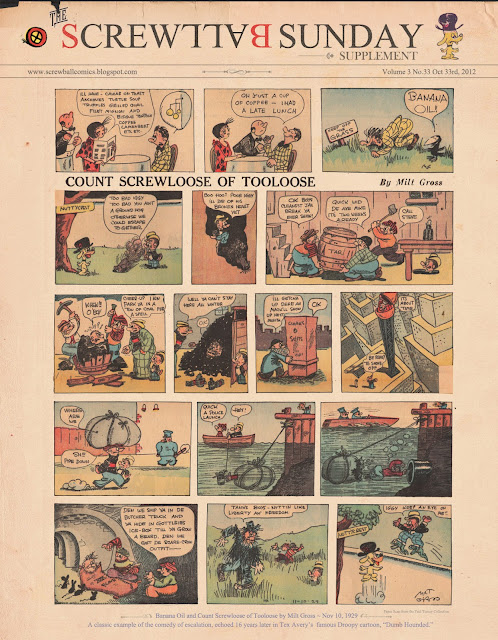 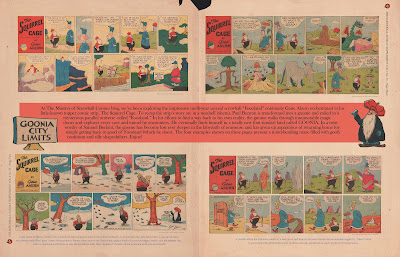 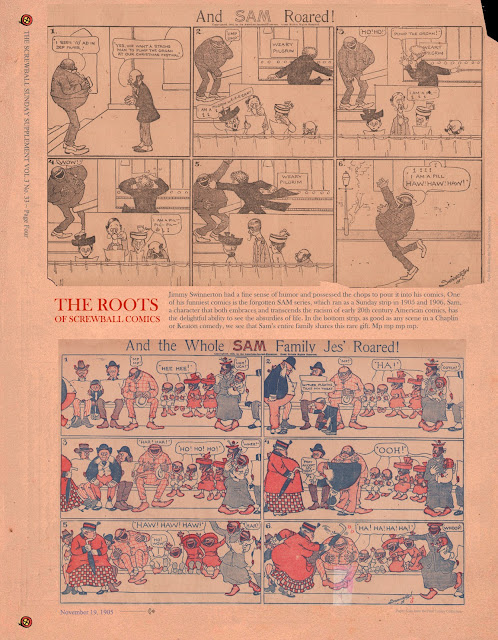 GREETINGS FROM THE LAUGHING ACADEMY!

Welcome to the third issue of our Screwball Sunday Supplement. This issue is packed with comics that ALL have produced guffaws and laffs amongst me self and me pals.

We kick off with a superb Milt Gross Count Tooloose that could well be the prototype for Tex Avery's classic Droopy cartoon, "Dumb-Hounded." We also get a Milt Gross Banana Oil topper. This was a very popular strip in itself back in the day, with folks saying "banana oil!" instead of "bullshit!"

In the interior spread, we get the extra-special treat of 4 Squirrel Cages, all from the 1946 detour from Foozland into Goonia. This is Gene Ahern at his most inspired, most trippy, most sublimely screwball.

On the the back page, we find two truly funny rescued 1905 Jimmy Swinnerton gems from the Platinum Age of American newspaper comics that I hope you will take the time to read, as I think they are something special, racial stereotypes aside.

Swinnerton's SAM strips echo Gross' Banana Oil and Count Screwloose comics in that they both provide a surrogate observer into the strip in the form of the Count, and Sam. Where black American Sam laughs at pomposity, Jewish American Screwloose is aghast at hypocrisy. Sam may have the more light-hearted  response, but in all fairness, he "mp-mp-mps" in an earlier and more innocent era, before the horrors of the 20th century transpired.

Just as Sam and The Count are doorways into their comic strip worlds, Ahern's Paul Bunyan-as-bewitched-gnome is a surrogate figure for us in The Squirrel Cage, through which we can comfortably explore the weird worlds of Foozland and environs. Ahern fractally inserts a multitude of additional doorways into his strip, going ever deeper into the labyrinth, until it's impossible to tell the dream from the dreamer -- do we dream of the snarky citizens of Goonia, or do they dream of us?