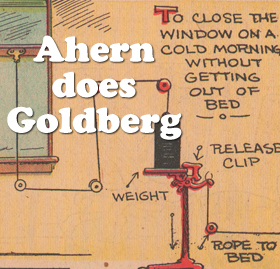 There can be no doubt that Gene Ahern very deliberately followed in Rube Goldberg's footsteps. As of yet, I have found no evidence that the two great cartoonists knew each other personally. Rube spent most of his life in New York City, and Ahern lived most of his life in a city just outside of Los Angeles - so it's unlikely they hung out as pals.  Artistically, however, it seems clear that Ahern (like Milt Gross) owes a huge artistic debt to Rube Goldberg.

The first official Rube Goldberg invention cartoon, an automatic weight reducing machine, appeared in August, 1914. Over the next few years, Goldberg perfected his formula and created a unique cartoon format that made him famous, putting his name into the dictionary.

In this example, from Carl Linich's blog on Gene Ahern, The Squirrel Cage, we see Ahern employing a very similar approach, with -- as Carl observes -- a Dr. Seuss flavor. 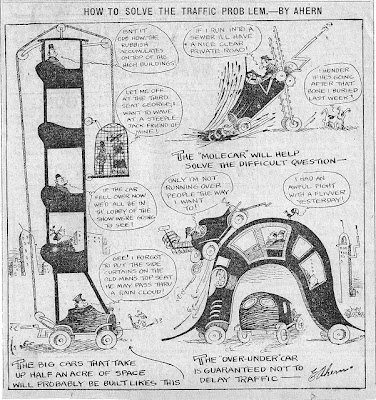 By 1919, Ahern's comics appeared in some newspapers directly underneath Goldberg's. In this example from 1919, we see a masterful Rube Goldberg daily from his Boobs Abroad series, detailing the comic misadventures of his third European vacation. While Rube is a seasoned pro, Ahern is still finding his voice as cartoonist -- note how similar the title of his nascent strip, Squirrel Food, is to his later Nut Brothers and The Squirrel Cage.

Ahern scored a major hit about three years later, when he created Our Boarding House. He successfully wrote and drew the adventures of Major Hoople for fourteen years, until he left in 1936, when he started up Room and Board and most significantly, The Squirrel Cage. In this Sunday funny featuring Ahern's Our Boarding House in 1933, we see Ahern -- now a leading cartoonist in America, paying homage to his artistic mentor, Rube Goldberg, with a series of nutty inventions, Hoople-style. True to his character, the Major's silly inventions are all bulwarks of his own laziness. In the last panel, he is "inventing" as a way to avoid doing any actual labor.

The scan is from my own collection, and also features a surreal Nut Brothers topper strip as well as a Silly Snapshots panel -- another play on a tried-and-true Goldbergian formula, complete with a grotesque caricature. The Nut Brothers is also an invention tour de force, anticipating the early years of The Squirrel Cage.


Too bad that Ahern and Goldberg never collaborated.