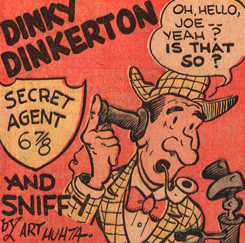 Zounds! A Clew! I have uncovered a forgotten screwball classic: Dinky Dinkerton, Secret Agent 6 7/8 by Art Huhta. This inventive, well-done, and wacky detective lampoon ran as a both a daily and and a Sunday from 1939-1944 (or 1946 depending on which resource you consult). Reading the comically robust  Dinky Dinkerton is a lot like experiencing a Marx Brothers movie on paper, or reading the early Mad comics, and that makes it an unexpected (and unknown) highlight in the history of screwball comics.


Art Huhta crammed his comic strip with what he sometimes called "corny" jokes. Dinky's detective agency tagline, often written on the side of his office building is "Crime don't pay -- well." A sign on a door reads: "Door! Open before going through." Dinky's office often had signs on the walls advertising sales: "Crimes solved half price this week."

Huhta also found comedy in his characters -- when it seemed the capture of a criminal was imminent, Sniffy could often be seen grabbing a can of "star polish" and shining up his detective's badge. Sniffy was also fond of excitedly proclaiming "A Clew!"

Another screwball element Huhta injected into his strip was the silly invention. Here, we see Dinky's "telephono tub" in action (note: patent suspending)

Dinky and Sniffy often zoom to crime scenes and chase crooks in their comical "Squat Car," which may have been inspired by the improbably and comically small car Bill Holman created in Smokey Stover. In addition to speeding along like bullet shot from a gun, the squat car tiptoes, bucks, and struts. It rarely has all four wheels on the ground, as Dinky and Sniffy manically zoom through streets so fast that buildings and lampposts bend from the wind. This nutty comic vehicle resembles a child's toy more than a dignified, imposing crime-fighter's machine. Huhta apparently delighted in deflating the self-important world of officials, lawmen, and mystery-solvers. Dinky Dinkerton was often just plain dinky.

This comical, juvenile counterpoint approach to creating a funny version of Sherlock Holmes was also the cornerstone of the brilliant Holmes parodies created by Harvey Kurtzman and Will Elder for Mad, which appeared about 10 years after Dinky Dinkerton ended.


On the Trail of Art Huhta: Who Wuz Dis Guy?


Art Huhta had a long career writing and drawing syndicated comic strips from approximately 1926-1970. He was born in 1902 in Crystal Falls, Michigan and passed away in 1990. In addition to being a newspaper cartoonist, Huhta also put his drawing skills to work as an animator at Disney, contributing to the famous dinosaur sequence in Fantasia (source: Mike Grell in a Comic Book Artist interview).

I don't yet have a lot of information on Huhta, so I can't say for sure if Dinky Dinkerton was the only screwball strip he created or worked on. He ghosted several other non-screwball comic strips, including The Nebbs, Simp O'Dill, Lolly Gags, and Tiny Tim (source: Jerry Bails Who's Who).  He is known to have written and drawn several other comic strips, including Elmer's Fixit Shop and Hokum Hotel, which may have been screwball comics. I have yet to find examples of these, but I have reason to think Hokum Hotel may have been a one-line topper for Dinky.


Art appears to have started his career in comics working on Mescal Ike with S.L. Huntly from 1926-40. He worked his way up from assistant, to ghost, and then eventually signed his name to the comic. Here's an example of Mescal Ike, signed by Huhta, that shows both his appealing cartooning style, and his potential for making an excellent screwball comic:


After Mescal Ike, Huhta created Dinky Dinkerton from 1939 to the mid-40s. Following Dinky's demise, Art started up Wild Rose, a faintly L'il Abner-esque pretty girl comic set in the rustic hills, with a mix of adventure and gentle hillbilly humor. It was a Sunday-only comic that ran from 1946 to 1951. As appealing as it is to look at, Wild Rose has nothing to offer in the way of screwball humor. Here's an example, in which the strip engages in a bit of meta humor:

In the 1960s Art began to teach at The Chicago Academy of Fine Arts, where he became the head of the Cartooning and Animation Department. Among Art's more well-known students are Geoff Darrow and Mike Grell. Art gave each of his graduating students an original Dinky Dinkerton strip. (source: Rich Mrozek, Weird Love #1)

The last publishing credit I can find for Art Huhta is Mama Bear's Squeaky Shopping Cart, a children's story published as a Sunday comics supplement in The Chicago Tribune in 1970.

Dinky Dinkerton (1939-1944) was distributed by the tiny Jones Syndicate, a one man operation run by Paul Jones, a former salesman with the larger McNaught Syndicate. Art Huhta remembered a hardship that the mini-syndicate suffered: "One incident that was a blow was when he (Paul Jones) hit a horse on a highway in Texas and demolished the syndicate's one and only car. Travelling by train was out of the question during the war because you could only hit the large towns." (Art Huhta, quoted in Ron Goulart's Encyclopedia of American Comics)


The strip began in September 1939 (source: Ron Goulart, Encyclopedia of American Comics) and was credited to "Jim Wallace" a pen name for Art Huhta. It's unclear exactly why Huhta started out with a pen name, but perhaps it was because he was working on another syndicated comic strip, Mescal Ike when Dinky started sleuthing. In any case, right around the time Mescal Ike ended, in 1940, Art Huhta's name begins to appear on Dinky Dinkerton.

Art's Dinky Dinkerton was a skillful, gag-stuffed pastiche of Sherlock Holmes -- one of hundreds. By the late 1940's, such a concept was a little stale, but Art's skilled brushwork (it appears the Dinky strips were inked entirely by brush) and Rube Goldberg-like flair for injecting nuttiness into the comic lifted it above the tired concept. Dinky, with his crooked nose and deerstalker cap is obviously a caricature of Basil Rathbone, the most famous actor to portray Holmes at the time -- and practically a caricature himself:


The full name of the strip, Dinky Dinkerton, Secret Agent 6 7/8 and Sniffy, could possibly be a nod to screwball master George Swanson who, created the character of Officer 6 7/8 for his screwball comic, High Pressure Pete about 14 years earlier, in 1935.


Sniffy, Dinky's rotund, affable "Watson," resembled Art Huhta, and often stole the show with his penchant for getting into trouble and for chasing pretty women. Sniffy is similar to the sidekick Jack Cole developed for Plastic Man -- the immortal Woozy Winks. In at least one 5 week sequence in the dailies, Sniffy was the sole star of the strip (the continuity concerned him falling in love).

The Sunday Dinkys were self-contained episodes, condensed bouillon cubes of screwballism. Here's a Sunday from an unknown year, but very probably 1942 or 43: 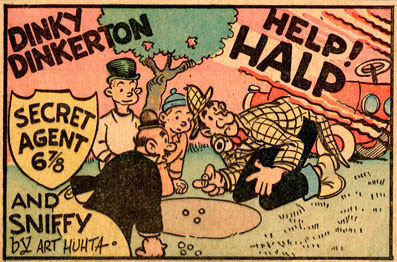 In the opening panel, the wold's greatest detective is concentrating on a vitally important task --shooting marbles with Sniffy and the neighborhood kids. Responding to a cry for help, they zoom to the rescue in their  squat car and Sniffy uses the official megaphone to ask "Smatter?" 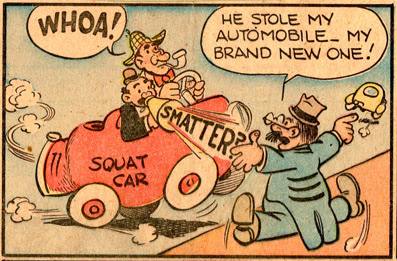 The chase is on for the stolen deluxe auto. The "Anybody driving?" background gag often appeared in the Sundays -- similar to Ving Fuller's "Go fry ice!" gag in his Elza Poppin comic strip. 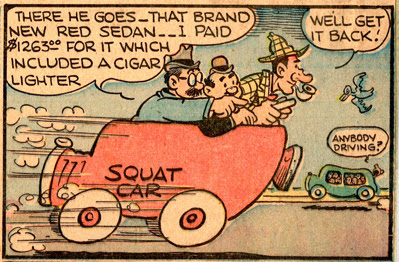 I love this panel -- look at how Art distorts the background details... 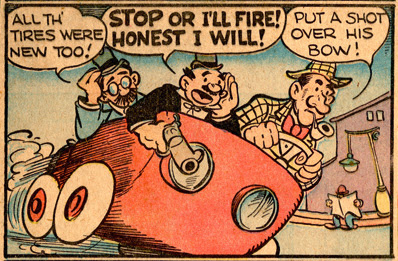 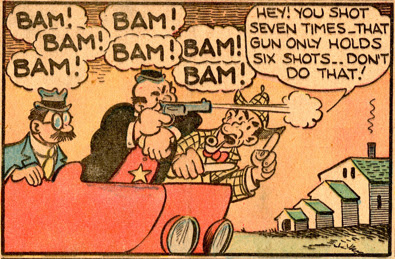 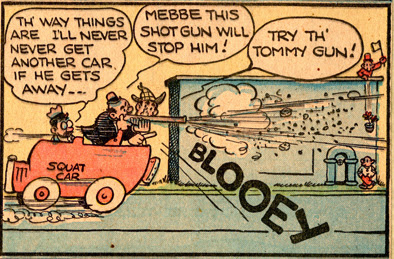 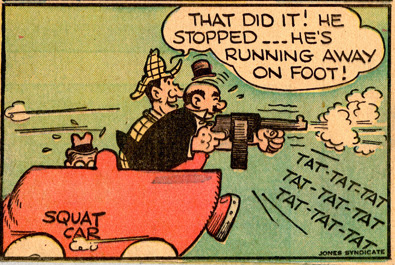 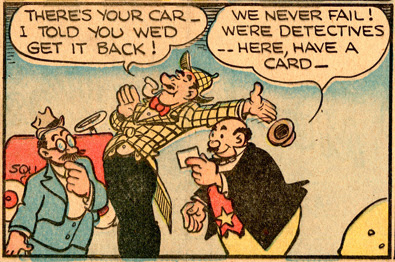 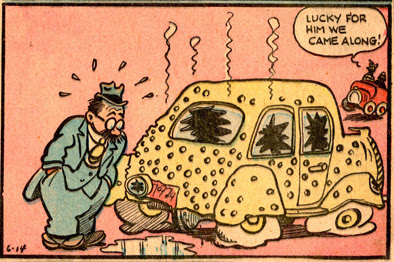 One aspect of screwballism is the wacky twists and turns a story can take as it chases the gag, rather than a logical plot. Dinky certainly fills that bill, especially in the daily strips, which featured  2-8 week long adventures with titles such as "The Man Who Couldn't Sleep," or 'The $50,000 Mystery."


I'll round out this introduction to Art Huhta's goofy gumshoe with a a couple of BONUS Dinky Dinkerton Sunday pages, scanned from my own collection. There is much screwball goodness to savor in these pages -- enjoy!

That's it for now, gang! Hope you enjoyed this large serving of Dinky matters! 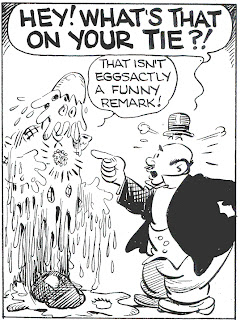