Presenting a cuckoo screwball comic jam by Boody Rogers and Zack Mosely that reaches rarely scaled heights of wild lunacy. The page, never meant for publication, appears to have been created as a wedding gift for a friend who may have been named or nick-named "Rupe," or "John." Rogers assisted Zack Mosely on the Smilin' Jack comic in the late 1930's, so it's likely this jam between the two cartoonists comes from that period.

We haven't explored the comics of Boody Rogers in this blog yet, but he certainly belongs in the pantheon of screwball masters. Rogers' created Sparky Watts as a comic strip in the early 40s and then as a comic book feature for Columbia. He also did the even-nuttier Babe for Quality Comics.

We'll do a Boody-call in a later post, but for now, we're looking a page that may be one of the nuttiest screwball comics ever made. The page is laid out like a full Sunday comic with a topper, distributed by the "Ding Dong Syndicate." To start with, here's the topper:

There's a certain freedom that comes when cartoonists get together and make comics just for the fun of it. Jams became popular in the Underground comics of the late 60s and early 70s,  and then the self-published Newave comics of the 80s and 90s. Currently, jams are a popular and frequent occurrence and part of the American mainstream comic industry's flow of "product." It's something of a miracle to discover a screwball jam from a much-earlier era.

In the topper alone, we are bombarded with daft twists on cornball cliches. Both Rogers and Mosely were professional cartoonists who had absorbed the screwball style and they deftly play with it, here. What makes this topper and the rest of the jam page so remarkable is that it is a self-conscious yet free-flowing parody of a form that already is a kind of parody of itself. It's an example of screwball-screwball, or meta-screwball.

Screwball comics by their very nature are meta. In order to bend and stretch and natural laws of physics, they first have to establish them. Therefore, when Bill Holman places a hanging picture on the wall behind Smoky Stover and Chief Cash U. Nutt, he is first obeying physics. The picture is connected to a string that hangs on a nail. Then, when Holman draws a figure leaning out of the picture frame, he is creating a screwball event, in which something wacky is happening.

Similarly, when Smokey drives a car, Holman first establishes the base reality of a gas-driven, round-wheeled vehicle with a steering wheel, headlights, etc. Then, he adds a layer of UN-reality, with various parts flying off as the car zooms like a loony rocket.


Bill Holman's Smokey Stover is already a parody of screwball comics. He went one step further, breaking a kind of sound barrier of wackiness, when he drew this unpublished, unhinged parody of Little Orphan Annie.

"And last month they filtched all of my finial, and dinkheimered 77 of my dynamic dinkies..." There's a Dr. Seuss quality to Holman's writing here, as he parodies his both himself and Harold Gray. The result is sublime nonsense. 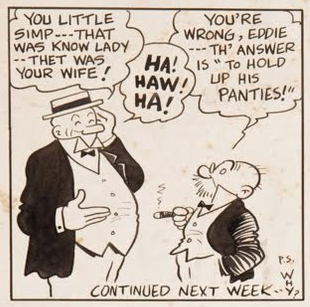 Since Rogers worked in Mosely's style, it's difficult to tell who did what, but it's clear the two played off each other and inspired several off-color ethnic and sexual jokes that could never be used in their mainstream work. In effect, this is an an underground comic thirty years too soon. The same sensibilities that drove the irreverent, taboo-breaking Underground comics  are at work in this jam page. It's perhaps a missing link between screwball comics and Undergrounds.


Many thanks to the kind reader who shared the Rogers-Mosely jam. Be sure to tune in tomorrow for Milt Gross Monday!