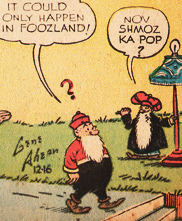 Here are seven new mind-boggling episodes from the Gene Ahern's Squirrel Cage -- a masterpiece of screwballism that is ripe for re-discovery.

In brief, Ahern started The Squirrel Cage in 1936 as a Sunday topper to his "main" comic Room and Board. As far as I can tell, there are three chapters to this strip, which appears to have run for about 16-17 years. For the first few years, in Chapter One (1936-41), The Squirrel Cage was built around the idea of two nutty inventors and a mysterious little hitch-hiker. Towards the end of this period, Ahern introduced elements of magic and fantasy into his witty, humorous framework. The result was something quite extraordinary at times, as can be seen in this episode, which presents us with advertising on invisible walls and the unforgettable octopaintus:

In Chapter Two (1942-44) of the SC saga, Ahern brought in a new character, Paul Bunyan. Yes, you read that correctly -- the giant lumberjack from American tall tales became the main character of The Squirrel Cage. Ahern's version of Bunyan is unique, and nothing like what you might expect. Here's one from towards the tail end of this phase:


Carl Linich has posted a hefty selection of the rare Paul Bunyan episodes at his Squirrel Cage blog. In the episode above, it appears that Paul has entered Foozland. One of the burning questions in my own research concerns how Paul Bunyan entered Foozland. In any case, somehow -- probably at the hands of a pissed off witch -- Paul Bunyan is reduced in size to a round little gnomish fellow, initiating Chapter Three (February, 1945-circa 1953).

A fellow Squirrel Cage fan recently pointed out to me that the potted plant in panels four and six of the March 12 episode (above) is very Herriman-like, and I totally agree. Ahern came up through the ranks as a second generation newspaper cartoonist, first publishing in 1914. He rubbed elbows in Cleveland and New York with the early greats: Winsor McCay, George Herriman, George McManus, and his artistic father, Rube Goldberg. The constantly shifting backgrounds in The Squirrel Cage, much-lauded in Herriman's Krazy Kat, is an essential element of his surreal screwballism. Where Coconino County is filled with start desert landscapes and majestic rock formations, Foozland and environs is a place of grassy foothills and dirt roads. It reminds me of the same mental images I get reading Chaucer's Canterbury Tales. Come to think of it, the costumes of Foozland are vaguely Medieval.

Foozland is a place where the laws of nature are quite different than in our own world. It has its own internal logic. Part of the fun of reading the Foozland comics is discovering new aspects to this fanciful, nutty world. And that's the primary set-up of most of the Foozland strips. Paul Bunyan is an unwilling tourist in a strange land. There's usually a sense of left-to-right movement and often a road that Paul is walking down. In the first years, he is frequently trying to find the way out of this bizarre place.


In Foozland, the things you say can shift your reality. When Paul says he will stick around, he suddenly has to deal with being trapped on the "enchanted flypaper." In the best screwball tradition, Ahern's device is both absurdly funny and a wise comment on how the universe works.

You'll notice that in the episode above, the Little Hitch-hiker from the early years is now thumbing a ride in Foozland. Obviously, Ahern knew he had a good thing with the hitch-hiker character and found a way to keep him as an primary element in the comic.

Although Ahern frequently drops the common gag/punch-line structure of most funny comic strips, he offers a more understated style of humor, based in equal measures on screwball situations, fantastic phenomena, and human foibles. It's Dr. Seuss combined with Rube Goldberg (Ahern's early mentor and template). But that sells it short. The Squirrel Cage is unique and represents a significant work in American comics. It is hard to believe that it is virtually unknown.

In this next episode, we see the 106-year old King of Foozland, a glorious and glorified fool who wears his crown in the bathtub. Funny hats are a big part of The Squirrel Cage.

The "bag of wind" seems appropriate in a stream-of-consciousness way to the meaningless pomp of royalty. Aside from the funny drawings, there is so much here that is fantastic and funny. Not the least of which is the truncated "BANG" sound effect in panel 8: In this next strip, we have probably the closest summary to Ahern's concept to appear in the strip: "this country is where you have dreams while awake."


Here's another "magic door" episode. In panel two, we see another characteristic of Foozland, which is that inanimate objects speak and have personalities. Even more creepy and wonderful, you can sometimes become separated from your shadow. The way Ahern does the shadow business here is pretty neat. Paul doesn't notice it, but we -- of course -- do see it. This puts us in complicity with Ahern. "Yep, this is Foozland alright!"


I mentioned earlier that the laws of physics are different in Foozland. I'll end this post with an example of this that made me and Frank Young go "WTF!?!" 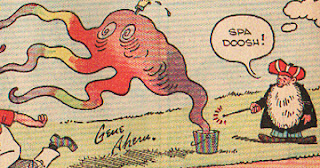