Have A Gross Sunday! The Apex of Loose-Scrawl Screwball Comics 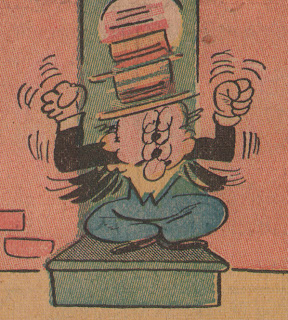 Here's a particularly gelastic Milt Gross 1928 Nize Baby Sunday page, scanned from my own collection and, as far as I can tell, previously unshared on the Web.

Folks, it's high time we featured the work of this undisputed master of screwball masters. Milt -- if you don't already know -- is the goods. His comics are interchangeable with the definition of screwball: odd. zany, eccentric, and impulsively whimsical. His very line is screwy -- eccentric, spontaneous strokes that somehow create hilarious little drawings. A fellow screwball fan who knows his stuff recently coined the term "loose-scrawl cartooning" as a possible common element in screwball comics. I love that term, and certainly the comics of Milt Gross represent the apex of loose-scrawl cartooning.

And yet, there's nothing slap-dash about his work. Nothing is phoned in. Gross was known to be a perfectionist and was truly, madly, deeply committed to his creativity. In fact, he was probably one of the hardest-working cartoonists and humorists of his generation. Gross not only made a continuous string of highly original Sunday and daily comics for over 30 years, but he also wrote very successful books, wrote and directed films and cartoons (well, just a couple but they are great), had a hit play, and turned out scores of articles and stories for various publications. He even wrote for Charlie Chaplin (The Circus). When he hit upon the idea of writing in Yiddish-drenched Jewish-American dialect, he created a whole new sub-type of comedy.

Reading Gross's text is an experience unto itself. He was double trouble as a cartoonist because both his drawings AND his dialogue are priceless. For example, he once transformed the song lyric "sing a song of sixpence" into "seenk a sunk from seex pants."

The example to share it today with you is from very leetle tacking. Ooops! I slipped into Grossspeak. That is, the example I have to share with you today is interesting because it's an example of Gross working with almost no dialogue, and instead relying mostly on his visual humor. The guy could draw funny, and this comic certainly shows that.

The set up: Mr. Feitelbaum, the head of the family that is largely the subject of Gross' Nize Baby comic (and book of the same name), encounters a scale that will refund his coin if he guesses his weight correctly. I remember there was a scale like this in my childhood hometown, Baton Rouge, Louisiana. I understand Mr. Feitelbaum's attraction to the wager. In the first panel, Gross draws a hilarious little dust cloud, a symbol from the cartooning lexicon meaning swift movement. His cloud is a lively scrawl. Even his drawing of the coin-op scale is funny, with the perspective as goofy as his character's speech and thinking. It's as if the visuals we see are all influenced by the nuttiness of the cross-eyed characters. 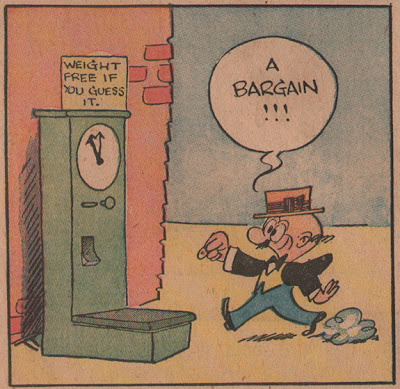 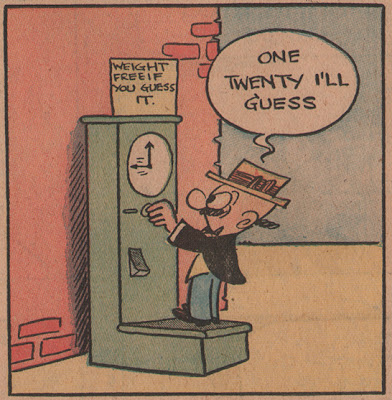 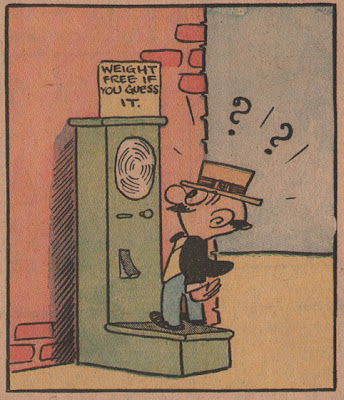 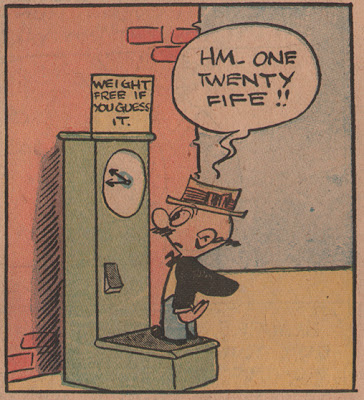 (It's silly, but I love the bottom right corner of the panel above, how it's ruled so casually). Now, at this point, any sane person would step off the scale and go on about their business. The scale would swallow the coin and reset for the next sucker -- unh -- CUSTomer. Feitelbaum, however, has a different reaction. Here's where the screwballism sets in. What follows is a visual smorgasbord of funny cartooning. 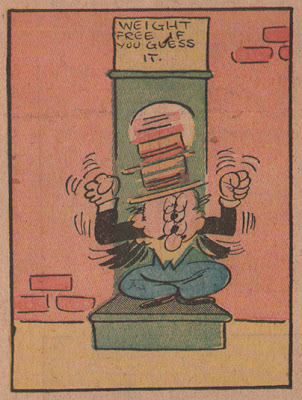 Gross draws faster beats as Feitelbaum speeds up to work off the extra poundage... 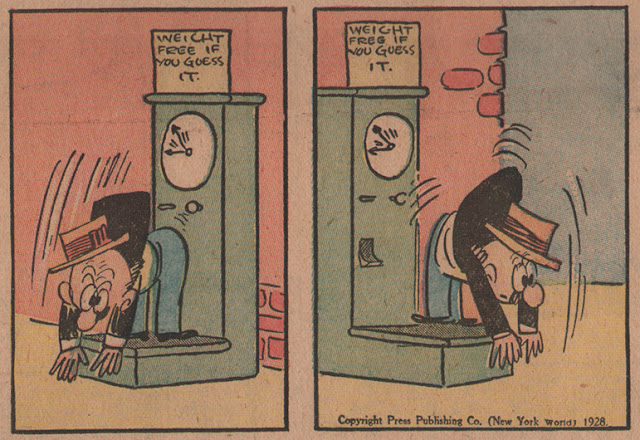 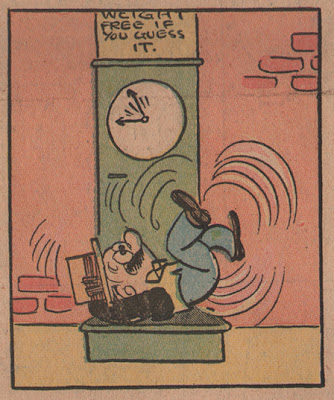 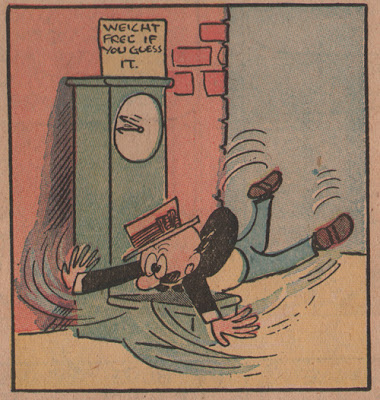 These drawings look like the freeze-frames you get when you press the pause button on your DVD player. 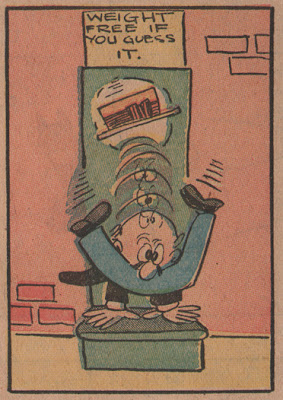 He checks his weight, quivering and sweating from the exertion... 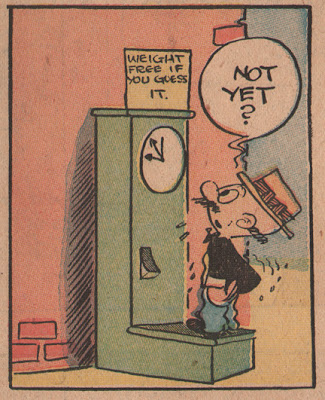 A Feitelbaum is not to be defeated. 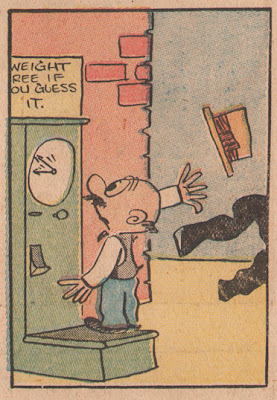 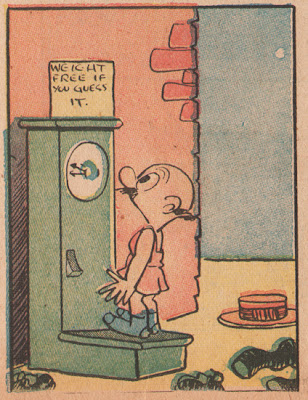 Still not there. Gross magically finds ways to keep escalating the screwiness. And ya gotta love comics, pull out a giant magnifying glass (from where, we won't speculate) and the sun appears in the sky. 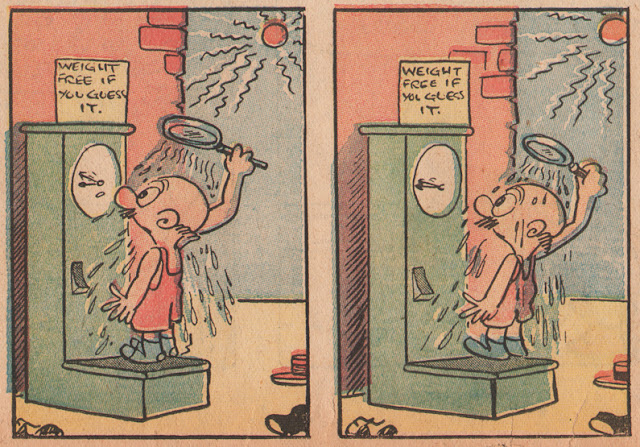 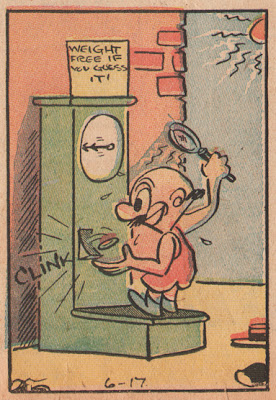 And, finally, back home, the adventure is proudly recounted to the family, who are ridiculously proud and happy for Pop Feitelbaum's victory. 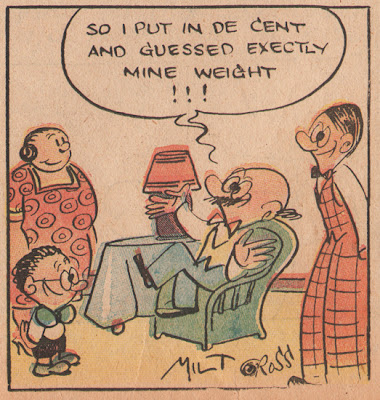 I broke this page into the large squares above to take advantage of the vertical scroll effect to slow down the reading of it and present the panels as large as possible in this blog page layout, so you can savor the artful loose-scrawl cartooning of one of Screwballdom's great masters.

A big thanks to Adriano, my pal Carl and to the fellow screwball fan who gave us the term "loose-scrawl cartooning." Couldn't do it without you guys!

I hope you enjoyed this Milt Gross delight and that it was worth the weight (cough cough). Stay tuned to this blog! Much more Gross stuff to come.

Note: You can enter your email address in the field at right to receive new posts as I publish them in your email. I don't see your email, and it's protected against spammers. It's safe.