Doc Syke by Ving Fuller: A Prescription For Surreal Silliness 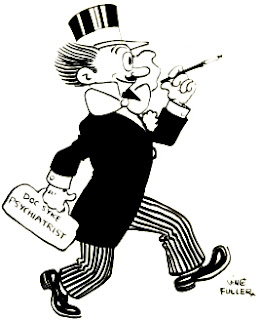 
Running as a Sunday and daily through roughly 1945-60, Doc Syke (at first it was called Doc, and later, Little Doc) was for many years an inspired, surreal, goofy, subversive, and totally unique comic that both sharply satirized and joyfully celebrated human looniness -- in other words: classic screwball. The strip falls in what could be considered the first years of the "modern screwball" period that could also include Virgil Partch's surreal gag comics among others.

I propose 3 phases to screwball comics:

Let's start our Doc Syke taste-fest with a bang:

As you see by the wonderful example above, Ving had something more to offer than just a gag strip. Just as the father of screwball comics, Rube Goldberg, was a trenchant observer and skillful ridiculer of America's obsession with mechanical gadgets, Ving entertainingly comments here on the double-edged sword of scientific progress. His mad scientist, Professor Cyenhide (both a play on the poison and also a prescription for dealing with nuts - sigh and hide),  in the comic above is truly insane, lacking in morality and obsessed with inventing. In the title panel, Ving draws a squirrel --the universal screwball comic symbol for nuttiness -- pushing the Earth over the edge. But it's still funny stuff -- and probably Ving didn't think too hard about the deeper meanings and sub-conscious connections -- the strip has a sense that he just let it flow.

At first glance, Doc Syke with it's minimal visual style is a sort of poor man's Nancy, if you can imagine such a thing. Fuller was obviously working in Bushmiller territory, but with a zany, goofy twist that came natural to him and seems to infuse all his comics. The very concept was offbeat and rich with screwball possibilities: the wacky adventures of a slightly super-human psychiatrist. In Ving's hands, Doc is a "syke" like no other, with his debonair cigarette holder, top hat, and pointed goatee (which was removed by 1948, the date of most of the examples I'll share in this article).

Ving Fuller was as good a writer as he was a cartoonist. In the comic above, the wife of a man who thinks he is Abraham Lincoln shoots off this witty bit of dialogue: "He's been cured a dozen times but he always elects himself again."  The rant Fuller writes for the man with the Lincoln-complex to spout in panel four is a dense mass of Lincoln trivia that is funny in itself. The comic's resolution provides the desire (and required)  gag twist, but also reflects the therapy phenomenon called transference.

Here's another example of Doc Syke at work:

Ving was an opportunist. In 1945, pop psychology was emerging in America. Ving probably saw the emerging trend, and realized he had a golden opportunity to create a salesworthy vessel for his wacky style of humor. The idea of a comic strip about psychotherapy was novel and interesting in 1945.

Five years earlier, Ving capitalized on the popularity of the Olsen-Johnson musical revue, Hellzapoppin by creating a comic strip with a similar, but more palatable title for mainstream audiences called Elza Poppin (see my article on the strip here for some examples and more information). He gave the show's stars writing credit, using their fame to draw interest to his strip. Ving hustled to make it as a cartoonist.

Another wild and wacky entrepreneurial scheme of Ving's was his 1953 piggy bank, which is stamped "Ving Fuller" on the bottom: 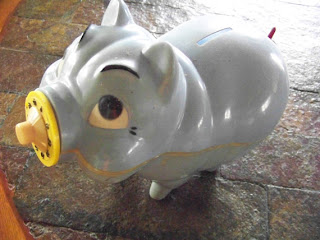 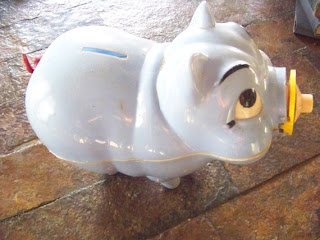 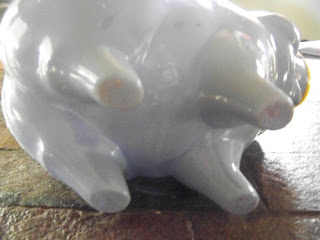 The pig's nose has a safe dial on it, so you can open it and extract money without having to break it. A truly screwball invention: 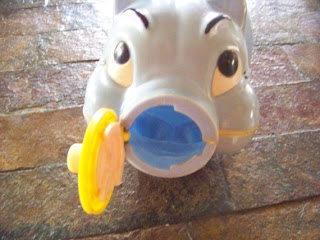 This was an actual real-world invention that he patented and sold. Here's the patent (I'm not sure if Ving Fuller draw this, but it looks as if he might have): 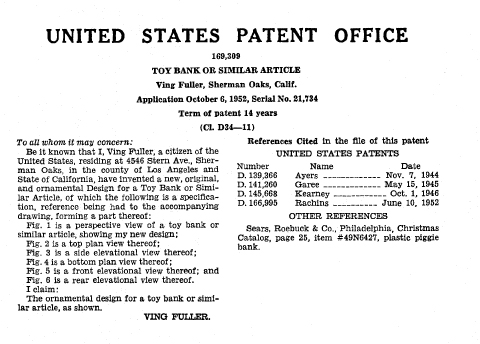 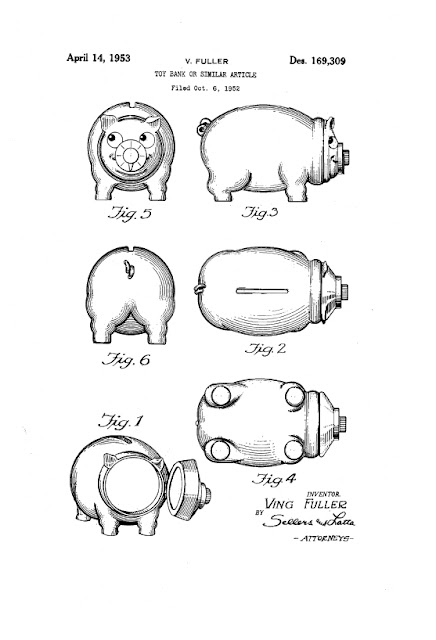 From what I can gather, Ving Fuller orchestrated a tie-in for his new product with his daily comics strip Little Doc. For several days in December 1952, Fuller had Little Doc feverishly work on a new invention, finally unveiling it as a triumpgh of modern technology.

Aside from taking advantage of a popular new trend, Ving Fuller's Doc Syke had much to offer that was unique and special. In this lyrical example with totally wacky twist, we meet Doc's son, called "Little Doc."

Here's another episode featuring Little Doc in which Fuller cleverly incorporates images of famous paintings in a strip that celebrates sunday funnies:


Notice the last panel in the strip above -- the big pile of newspaper comics and comic books includes Doc Syke - a fun and surreal self-referential paradox.

At some point, Fuller shifted the strip into the adventures of Little Doc, renaming it thusly. here's a couple of dailies that show he had lost a lot of steam 10 years later:


For some reason, around this time, Al Capp began to mention Ving Fuller in his comic, L'il Abner. Perhaps Ving was a friend or mentor to Capp. The joke was always the same:

Ving Fuller had a flair for what looked funny and appealing in comics. It was a skill that he developed over decades of cartooning. Here's an episode that shows he was thinking about the comedic possibilities of piggy banks long before his invention came to fruition:


Here's a particularly subversive comic that makes a different use of the animal speech balloon element we see int he above strip. 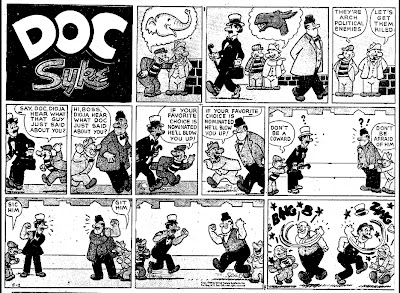 The above comic is an excellent lesson in our political system. Ving's brother, Sam Fuller, made hard-hitting journalistic films that told hard truths. In his own way, Ving gets a flavor of that in his screwball comics. This is a part of screwballism. Goldberg drew comics for 20 years that offered countless truth-telling sessions about politics, greed, snobbery, pride, and lust.

Doc Syke has many sides. There is as much goofy surrealism in the comic as anything:

Of course, a screwball comic is the perfect place for Alexander Ceasar Napoleon to make an appearance in the skewed world of Doc Syke where you can listen to the beautiful music in people's ears:


It's kind of amazing how Ving Fuller had a way of making likable comics about crazy, neurotic, obsessive behavior. Love the name here - Missus Flapnoodle. And the comical name for her ailment: gabbacious neurosis.

At the risk of developing a case of gabbacious neuosis myself, I'll refrain from commenting (much) on the rest of the examples of this marvelous screwball comic that I have to share with you today. I have more on Ving's life and work to tell you, so stay tuned.

My last example of this goofy, inspired comic for you today is one I particularly like -- there's something joyously wacky and perfect about it. This is berry good comics! 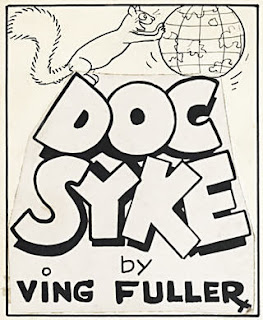