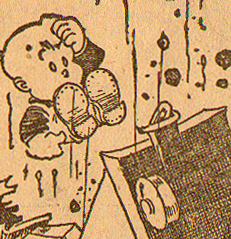 Here's a scan from my own collection of an amazing early screwball comic in a deluxe Sunday format. This is a Sunday edition of Walter Hoban's Jerry On The Job from 1919. Walter Hoban, as you will see if you follow this blog, created some of the finest screwball comics ever. His work is almost completely unknown today.

Jerry started out as a daily in 1913, and a Sunday was added in 1919. So the page we're looking at in this post is from the first year of Jerry Sundays.

I'm haven't found an authoritative citation for when Jerry on The Job ended but I can tell you that it was drawn by Hoban at least until 1929, and lasted up to 1948, when Bob Naylor drew it. Also of note is that the Golden Age comic book artist, Jack Burnley (Starman, Batman) lettered for Hoban 1925-9 (Dec. 28,1998 - Free-Lance Star, "Quick Batman, To The Museum!") . In the mid-to-late 30s Hoban created a new classic screwball comic, Needlenose Noonan, with the amazing topper strip, Discontinued Stories. Around the same time, he also created a series of comic strip ads for Post Grape Nuts cereal featuring his Jerry On The Job characters. Hoban died in 1939, at age 49.

Jerry is a wee small lad with a big heart. He started out doing various jobs but after a while settled in working on a railroad for his boss, Mr. Givney, as we see in this episode from June 22, 1919.

Hoban's line was as distinctive as that of George Herriman and George McManus. His strips featured wacky situations, exaggerated reactions (sometimes called "plops") and he also festooned his panels with funny signs, puns, and wordplay. All of this is evident in the Sunday page below. Keep in mind that 1919 is pretty darn early for these screwball elements to emerge.

Perhaps feeling the joy of the expanded Sunday format, Hoban literally pulls out all the stops and delivers a spectacular screwball catastrophe in which a multiple-ton steam locomotive is dragged through the air, causing panel after panel of nightmarish destruction, evoking similar sequences in Winsor McCay's comics. The cataclysm is drawn in Hoban's sweet, cartoony style which makes the swath of damage even funnier.

Here's the page, panel by panel, so you can appreciate the many details and terrific compositions of Hoban's work. The full page follows at the end of this sequence.

In panel one, Jerry's boss, send him on a mission. Note Jerry's reversed response... signalling the disaster to come. Note the station name - "New Monia." 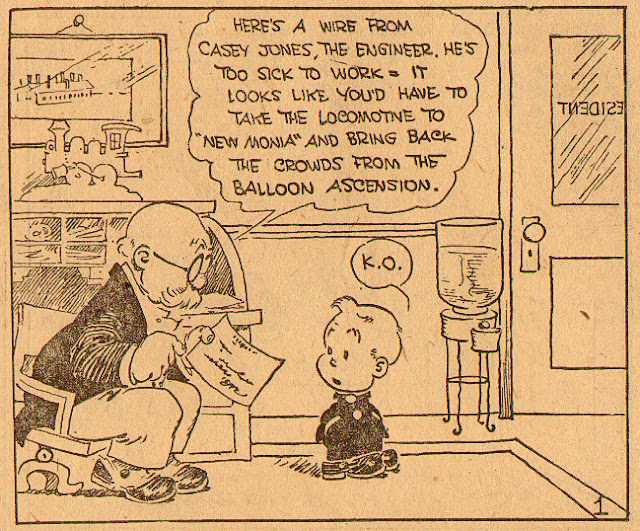 In panel two, Hoban adds a layer to the humor, with Jerry expecting the locomotive will "just fly." 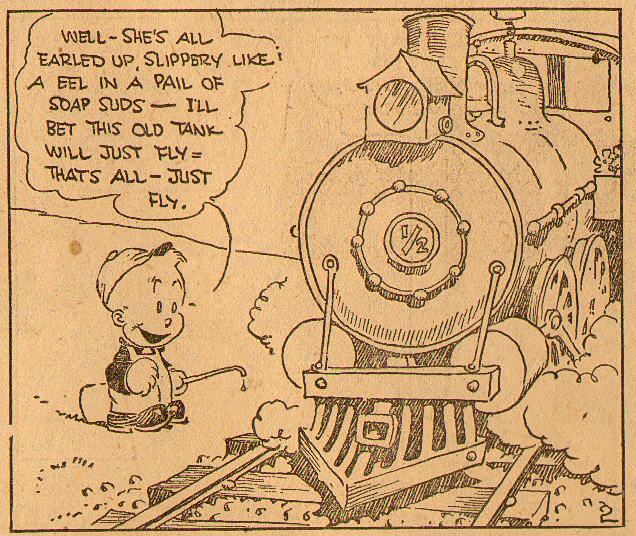 Notice in the next panel the locomotive has a flower box! I love Hoban's cute visual style. It''s a set-up for the inevitable wrong-ness that will occur... which adds to the disjunctive, screwball aspect of the strip. You expect cutely drawn characters and machines to follow the rules, but in Hoban's hands, well "toot, toot" as they say in France. 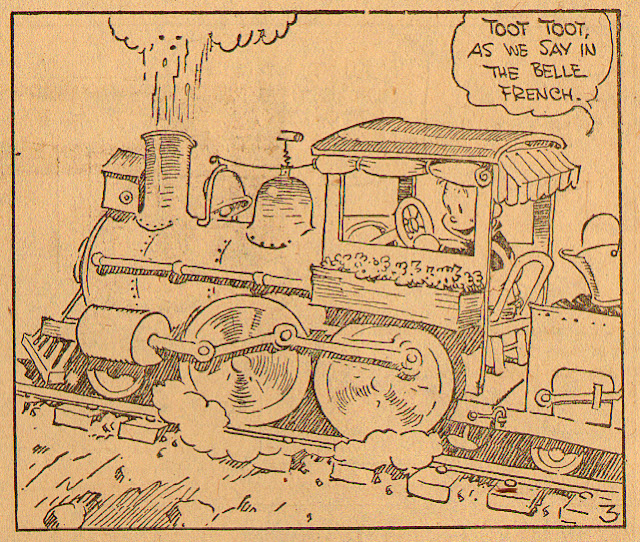 The next panel is a terrific dynamic composition. Like Herriman, Hoban understood how to use negative space. He's thinking like a movie director, or an animator, here -- capturing a moment in time. Of course, we can just enjoy the irony of Jerry's words... 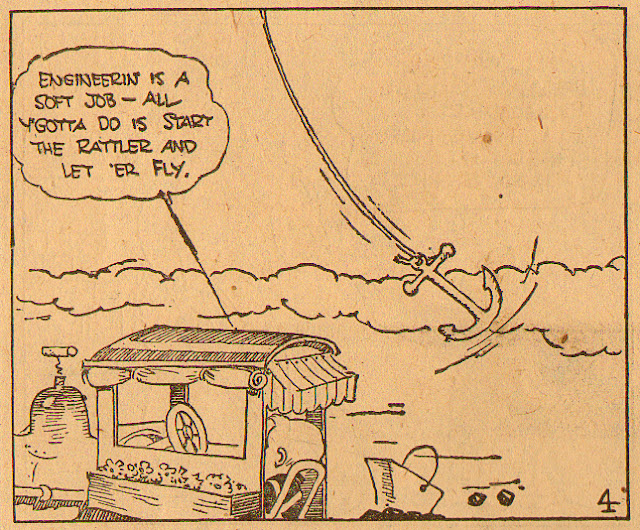 In panel 5, notice the details of the train and how solidly they are drawn. The way the train is being lifted is completely convincing. 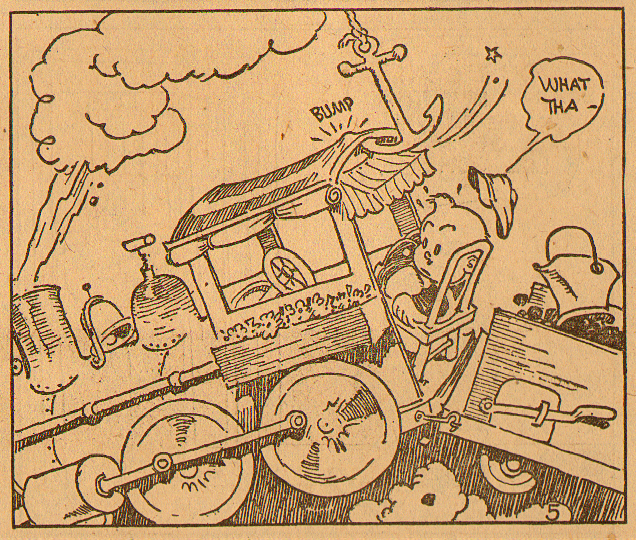 In panel six, the balloonist speaks for the first and only time, revealing a comical vanity and lack of awareness. This panel is hauntingly metaphorical for life itself. We may think we are sailing through clear skies, and yet we may very well have snagged a locomotive with our anchor. The bug-eyed bovine on the ground sees it all. 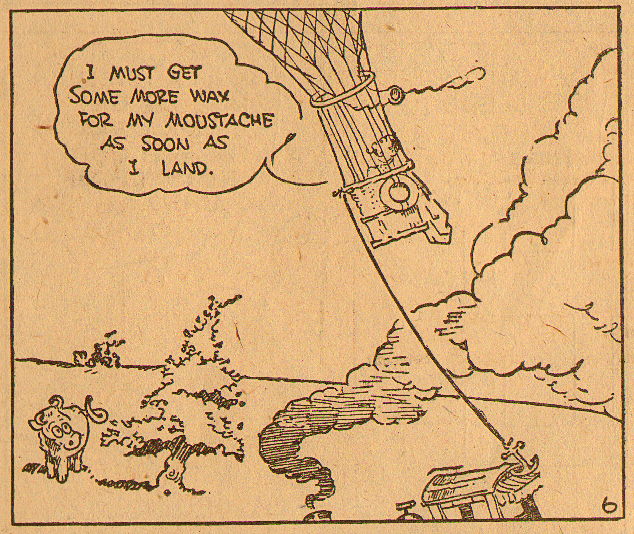 In the next four panels, there are no words. This is quite unusual for this time, when most cartoonists filled the empty spaces above their character's heads with endless streams of chatter. Hoban knows it is funnier not to have any dialogue at certain points. He's got the drawing chops to pull it off. And really, if one were in poor Jerry's situation, there wouldn't be much to say. 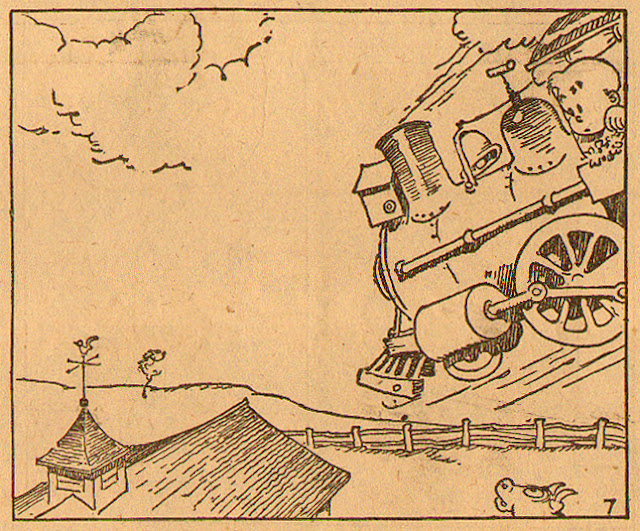 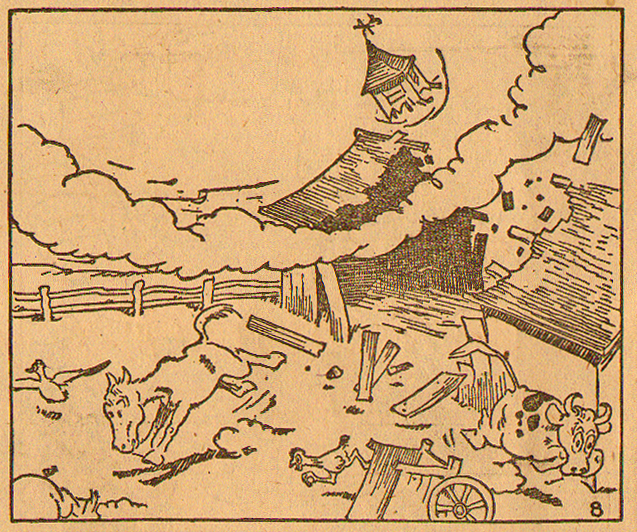 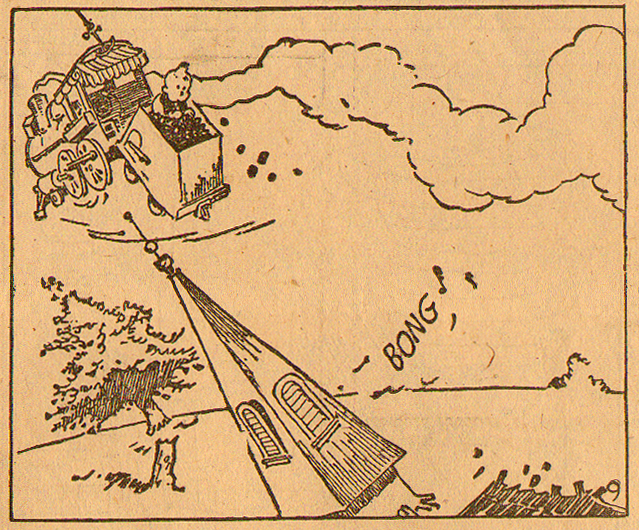 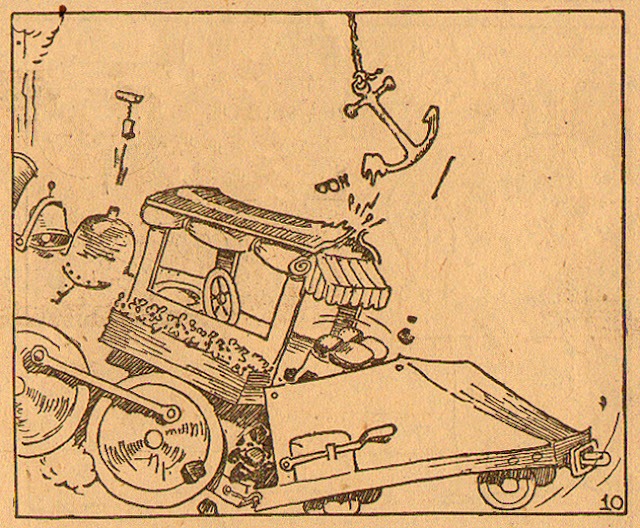 Jerry and the locomotive arrive at "New Monia" in a beautiful freeze-frame of disaster: 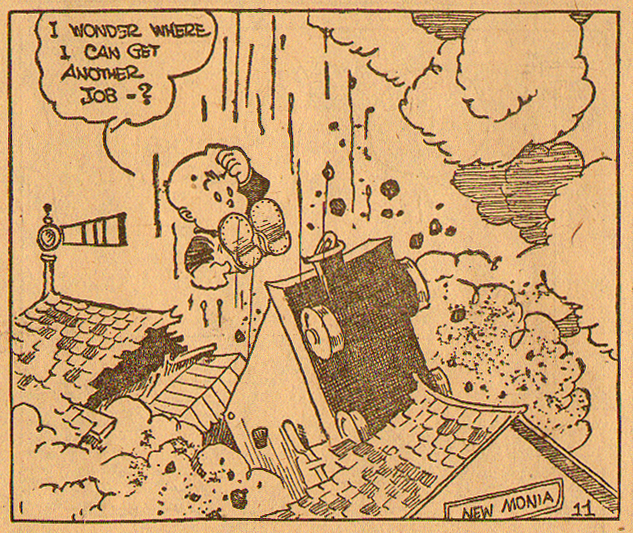 In the final panel, for once, there's no plop take... instead, Mr. Givney observes on his conductor's watch that it's time for Jerry to arrive -- a rare comic understatement that perfectly counter-balances and closes the spectacular visual sequence. 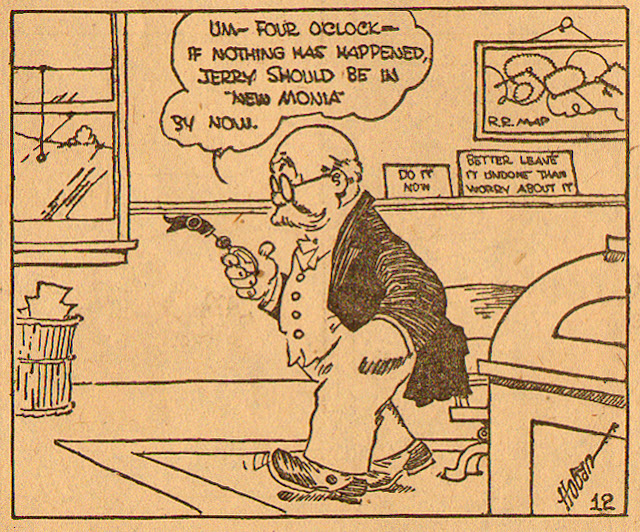 In the panel above, note the many background jokes. Hoban may be been the first to consistently use the background jokes device that later became a staple of George Swanson's $alesman $am, Bill Holman's Smokey Stover, Jack Cole's Plastic Man and Quality one-pagers, and Harvey Kurtzman/Will Elder's Mad stories.

And here's a scan of the entire beautiful page: 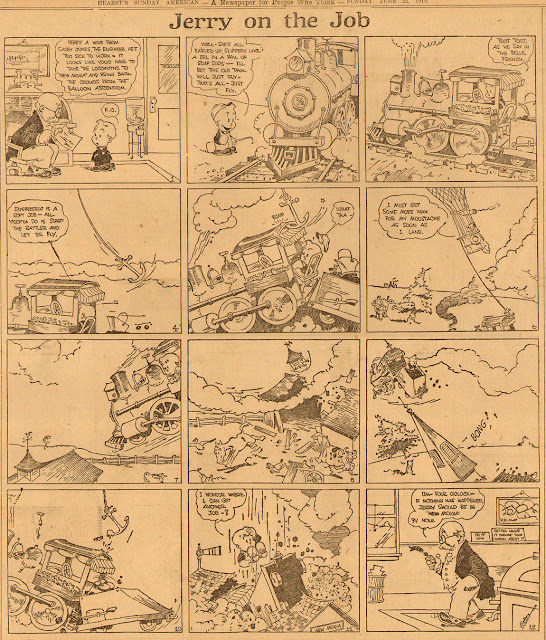 Stay tuned for more paper scans of Walter Hoban's wonderful comics from my collection. In the meanwhile, you will find a nice collection of Jerry on The Job dailies here. OK, then. I'm off to find some wax for my mustache.
Posted by Paul C.Tumey at 8:20 PM

Email ThisBlogThis!Share to TwitterShare to FacebookShare to Pinterest
Labels: Walter Hoban: Jerry On The Job, Wednesday