June 21, 1936 is a landmark date for SCREWBALL scholars because that was the day the first Squirrel Cage Sunday comic by Gene Ahern appeared.

Generally, Ahern is best known for his once beloved long-running daily/Sunday comic panel/strip Our Boarding House (Major Hoople), which he wrote and drew from 1921 to 1936. This comic sometimes had elements of screwball humor in it, but mostly it had a more grounded, character-driven approach. The puffery of the Falstaffian braggart, Major Hoople continued long past Ahern's departure from the strip in March,1936, written and drawn by others until the early 1980's. (A similar event happened with another screwball cartoonist we'll look at soon, Salesman Sam's George Swanson).


Gene Ahern may have been one of luckiest cartoonists ever. In 1936, after drawing Hoople for 14 years Gene got a huge break, getting hired away from his long-term employer, the NEA syndicate, by William Randolh Hearst's King Features Syndicate to create a copy of Our Boarding House at double his salary. Not only did Ahern have terrific financial security, but he also got a chance to slip out of the strict confines of the 14 year old strip. To put that 14 years in perspective -- Bill Watterson wrote and drew Calvin and Hobbes for 10 years. So, 14 years is a long time to make a daily comic.

Ahern made the most of his opportunity. He had to create for the Hearst-owned syndicate a copy of Major Hoople, and he obliged, conjuring up Judge Puffle and naming his new comic series as if he were giving directions to a new neighborhood:  Room and Board. It was like reading Major Hoople in an alternate universe. Perhaps with the flush of success motivating him,  Ahern's 1936 Puffle comics are even funnier than his Hooples. 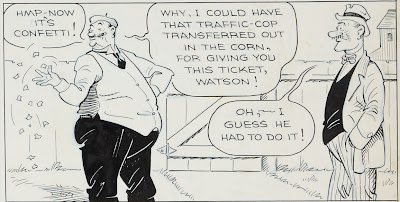 The Nut Brothers (Ches and Wal) lived a delightfully surreal world that changed from panel to panel as they spouted their jokey vaudeville patter. In one panel, a character might walk on water in canoe-shaped shoes, in the next he might poke his head from a tipi, and in the next, he might straddle his cohort wearing a large coat to appear to be a very tall man (but he's losing his balance, so he leans back on a unicycle).

Say, doesn't that bearded fellow sticking his head in the window in the first panel of the second Nut Brothers example above look a little familiar? In fact, the bearded fellow in the silly skimmer who eventually came to be known as "the little hitchhiker" in The Squirrel Cage made several early appearances in Ahern's earlier works. Apparently, Ahern found weird hats and disproportionate white beards to be funny stuff, and rightfully so!

Much as he did with the Hoople-to-Puffle metamorphosis, Ahern pulled the crack-brained Ches Nut, and Wal Nut into his new King Features Squirrel Cage strip -- only this time, he added something new: a second tier, and more importantly -- continuity. Here's the first Squirrel Cage comic strip, from June 21, 1936:


This particular example, from a microfilm source, ran a day early, in the Saturday, June 20 edition of the paper. The paper, a modest affair, ran the Sundays on Saturday in black and white, which gives us a fairly clean copy.

For the first time, we have Ches and Wal carrying on a conversation that lasts more than 3 panels. Ahern extends the sequence across 7 panels. We still have the shifting backgrounds and wacky sight gags in the background, but there is now a sense of spaciousness and continuity as Ches (or is it Wal?) proves himself to be a sound effects man of the highest order. The episode ends with the spectacular appearance of a steam locomotive driven into Wal's office.

Note that in the last panel, Wal seems fairly calm. This is direct contrast to the usual flip-take we see in other screwball comics, such as Smokey Stover and Screwball Sam/High Pressure Pete. Part of the humor of The Nut Brothers/The Squirrel Cage was the character's nonchalant acceptance of the many incongruities in their world.

The new Squirrel Cage was a brand new sandbox for the inventive Ahern, and quickly became much more than just an expanded version of The Nut Brothers.

A few months later, we see Ahern generating uneven variations on his initial theme. The episodes are sometimes flat and sometimes brilliant. This time, Wal is an investor and Ches is an inventor:

I love the way Ahern draws Ches in the last panel. That's a pretty neat cartoon run. The shoe-polishing staircase is also a pretty cool idea. For much of 1936-37, Ahern often made crazy inventions the centerpieces of his surreal world.


And then, in the next strip, Ahern seems to connect to something very different. The November 1, 1936 episode reads like a graphic novel adaptation of a scene from Beckett's Waiting For Godot. The existential suffering of the two men is only because of their stupidity and lack of awareness. An edge of melancholy has crept in. The cart they struggling with is curiously old-fashioned, with wooden wheels and no metal, as though it were something taken from the Middle Ages. Ahern, a collector of Old Masters paintings, has transformed his strip into an allegorical tableau, with a dash of Breughel and a bit of Bosch. As we find with much of the best screwball comics, there's a sharp commentary on human nature. In the midst of this creative surge, Ahern draws in a comical little hitchhiker in the last panel, almost as an afterthought.


This is the very first appearance of Ahern's little hitchhiker. He looks very different from his final incarnation. In next week's episode, there's no sign of the hitchhiker.


Ahern must have sensed he had a good idea, because he draws the funny little fellow in the background of the next episode, this time in the second panel and holding a bass drum that is nearly as big as him, establishing the years-long pattern of the hitchhiker appearing each week with a different wacky object. Meanwhile, Ches and Wal continue to play out their vaudevillian exercises in deliberate idiocy-- yawn.


The next week, the little hitchhiker has with him a stand-up piano! Talk about "baggage!" The main storyline is extremely funny, as well. Years later, Carl Barks did a 10-page Donald Duck "hypno-gun" story that resonates with Ahern's idea, here.

In the Dec. 7 episode, two weeks later, the hitchhiker has -- of all things -- a swarming hive of bees! He's become a regular, and he's looking funnier every week. The fun of spotting him has almost eclipsed the nutty entertainments of Ches and Wal.

In the next week's episode, Ahern's formula (Ches being stupid) merges with his penchant for the surreal in a small masterpiece. This one was so good, he didn't need the hitchhiker. Look at how the word balloon is reflected in the mirror. In the world of The Squirrel Cage, word balloons really do float above people's heads.


Next week, the little hitchhiker returns, as his beard grows and he dons a tam (not striped yet). Ches and Wal go through a fairly corny routine, but with the inspired idea of a "safe house."


The next week, the last Squirrel Cage of 1936, the hitchhiker appears and this time, he utters, for the first time, his forever after asked and never understood question.


In just a few short weeks, Ahern had developed a new character that would lead him away from the cornball vaudeville routines typical of The Nut Brothers and into an inspired surreal screwball world. Here's a look at the genesis of the little hitchhiker:

UPDATE! Be sure to check out the new Squirrel Cage blog by Carl Linich, where Carl is exploring the strip in great depth and sharing color examples. In fact, I just discovered that Carl posted a similar article to this one on the evolution of the hitchhiker... be sure to check it out, since it includes COLOR examples of the great first Squirrel Cage strips.