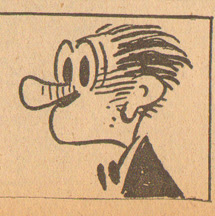 One of the great Screwball comics, $alesman $am (or Salesman Sam after a few years), appeared in various American newspapers from 1921 to 1953. All but forgotten today, it was an innovative, wacky, sometimes brilliant comic that gave form to the major work of two very talented screwball masters: George Swanson (tenure on the strip: 1921-27) and C.D. Small (tenure on the strip: 1927-36). Here's an introduction to the work of both, with some examples of their work that haven't been seen in over 75 years, including some nice, big scans by yours truly from my collection (that's right, girls, I got a new tabloid-sized scanner!). 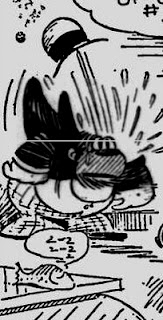 GEORGE SWANSON - Salesman Sam 1921-27
George Swanson, who signed his name "Swan," created the $alesman $am for the Newspaper Enterprise Association (NEA - also Gene Ahern's first syndicate). It first appeared as a daily on  September 6, 1921, with a Sunday page added in December 1922 (thanks to Bob Foster for this information). Swan drew the strip until around 1927.

The episodes almost always ended in an extreme reaction as shocked, stunned characters back-flipped out of the last panel, their hats and toupees flying. In a few years, Swan exaggerated the final "takes" into wild extremes. Often, we'd see Sam or another character bombarded by a sudden flurry of various objects being thrown at them in an explosion of cartoon stars by Mr. Guzzlem, or a store customer in outraged reaction to Sam's unflappable sideways way of looking at the world.


Note in the example above the little signs and surreal nuttiness in the background. I count 10 just in this one daily strip! There's a cat sitting in a bucket of ice water on a wood stove. There's a sign that reads: "Watches $1000 - Including works 5 cents extra." There's a dime price sign tooth-picked into a discarded cigar butt. But best of all is the big, upside down sign panel three. I've turned it around so you can read it: 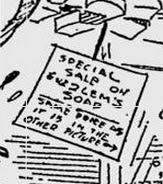 "Special Sale on Guzzlem's Soap (remember Guzzlem is the store-owner). Same Price as it is in the Other Picture." (arrow pointing to previous panel)

Swan also appears to have been an early innovator, if not the inventor, of the background gag that became an integral part of Bill Holman's Smokey Stover ( which began in 1935), and which in turn directly influenced comic book masters Jack Cole (Plastic Man: 1941-52)  and Harvey Kurtzman and Will Elder (Mad: 1952-56), among others. So, George Swanson, although unrecognized today, can be traced in direct lineage to some of the most celebrated comic creators in American history:

In 1985, Kurtzman publicly acknowledged his debt to Holman and Smokey Stover:

The talent-hungry, comics-obsessed William Hearst, who created the first comics syndicate in 1902, saw something special in George Swanson's strip and hired him away from NEA in 1927 to create a copy of his own comic strip (the same thing happened in 1936 with Gene Ahern and Our Boarding House, which led to the creation of the great screwball masterpiece, The Squirrel Cage).

Here's a pre-$am strip that Small also took over from it's original creator. Note the gentle, non-wacky humor and visual style. You have to look closely to see any connection with Small's Sam: 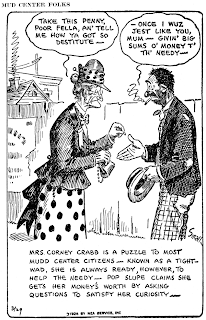 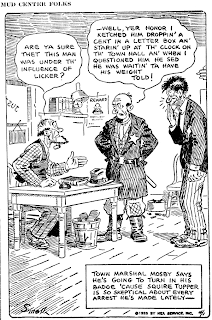 (More examples of Mud Center Folks, as well as a biography of C.D. Small can be found here on Alan Holtz' excellent blog, Stripper's Guide)

Comics historian and publisher Rick Marschall (his Nemo Annual on Screwball Comics is a major inspiration to this blog!) wrote that Roy Crane, who knew Small, characterized him as reserved and dignified. Small took Swan's strip, absorbed his style, and then made it into his own. The takes were not quite as outrageous, there might only be 5 background gags instead of 10, but Salesman Sam (not with the dollar signs dropped) was still solidly a superb screwball strip in Small's hands, one of the greatest.

Check out these Sunday examples I've scanned from my own collection. By the way, these pages are HUGE. Even with a big scanner I had to make two passes and stitch them together in Photoshop:

Small's drawings are crisp, his line is lively, and the images are wacky and appealing. Carl Linich pointed out to me that Small also added continuity in the dailies, giving more depth to the strip. It's as if one guy invented something terrific, and the other perfected it. Even though he was imitating Swan, Small injected something of his own self into his work and gave us some marvelous screwball comics, both in the writing and the drawings of many Salesman Sam strips. 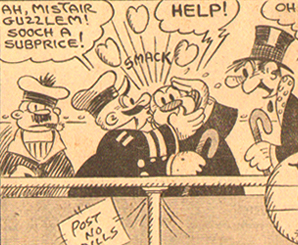 Look at how he spells the Swedish pronunciation of "surprise" as "subprice," a funny reversal in meaning of what the speaker intends to say. And how about those cartoon hearts flying out? Small has taken what Swan did with his cartoon stars of violence and transferred the effect to affection. I won't even mention the expressive way the speech balloons are drawn, or the "post no bills" sign on the side of the ship... oh, wait, I just did.

Here's two more paper scans of Small Sundays (more to come). Be sure to look for the mouse chasing cats:

And what of the seminal master. George Swan(son)? In 1927, he created a more-or-less identical version of his strip for King Features Syndicate called High Pressure Pete, which lasted until 1937 as a daily only (there were a handful of amazing Sundays, one of which can be seen here). The strip was even wackier, and more screwball than Salesman Sam. It was a logical artistic continuation of Swan's invention/development of the screwball vernacular and offers a never-ending series of comic nuttiness. Small also added small continuities. Here's a few examples from roughly the same time as the Small pages above:


More on George Swanson and C.D. Small coming up!

Also on this blog:
Salesman Sam - 12 Classic Screwball Dailies from 1930

Barnacle Press' Salesman Sam page. A wonderful selection of dailies from 1921-28. Incorrectly attributed to C.D. Small, though only the 1928 strips are by him. This shows the confusion surrounding the strip..

Bob Foster's blog entry on George Swanson (check out those Nonsense panels!). Bob wrote a great article on the life and work of George Swanson that appeared in The Comics Journal #281. It's not clear to me how to access this on the Journal's archive, but it seems as if you subscribe to The Comics Journal, you may get access to this issue and tons of other great material -- however I'm not sure about this. Hopefully online editor Dan Nadel can make this happen, if hasn't occurred yet, as this would be a great research tool!

Yesterday's papers post on Salesman Sam, with photos of Swan and Small.(In the post, it is stated that Small died in 1936, but Allan Holtz states that Small's obit lists his death in 1953.)