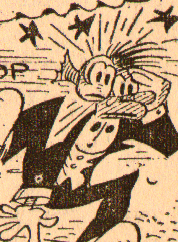 Here's the first 12 Salesman Sam strips from 1930, scanned from my own collection - a dizzy dozen of daffy, deft delights! As discussed in my first post on this classic screwball strip, C.D. Small perfected the strip's screwball elements when he took over the strip from the comic's creator George Swanson in 1927.

This duckie dozen decidedly declaims disaster and disruption are desirable. Um, put another way, this set of scans gives you a nice taste of Small's screwy greatness.

A word about reading these. Be prepared to take your time. They aren't like modern strips. Linger over them and let them soak in. The main gag isn't as important as absorbing the many details in the background and the numerous side jokes.

To give you a sense of this 81 year old paper I'm working with, I have only minimally touched up our first example from 1930:

I love the way Small draws snow. And check out the over-crowded general store interior -- classic cartooning!
In the next strip, below, don't miss the Dan O'Neill style moon in the night sky. And how about that take at the end? It's as though the ground just vaporized under the one character, and she drops so fast her hat and assorted items are suspended in the air for a second before also flying down. I always wonder what the next panel after one of these spectacular plop takes would look like.


We skip a day, to January 6, because the 5th was a Sunday and there was no daily drawn for that day.

This next strip is a particular favorite. I love the character design of the little rich man. Love how he rides an old-fashioned bicycle with a cat tied to the end of it. Love the snoring cat in panel 3. Also love the black out balloon in panel 3. Swanson did it first, in his version of the strip.

Spectacular take in last panel of the next strip. More great moon faces.

I love what Small does with cats in this strip. Check out panel one of the next strip.

It's fascinating how Small breaks the space up horizontally as well as vertically. Again, that's something Swan created in the first incarnation of the strip.


The next strip has a particularly sophisticated way of breaking the space up. The first panel has three vertical divisions. Sam was a strip about overcrowded stores, homes, and cities... and the strip itself is also over-stuffed!

The last two strips provide a mini-continuity. In a year or two, Small would develop the strip into 2-3 week arcs of continuities as Sam periodically ventured forth into the world to demolish various other professions.

It's my 50th birthday this week, so I'm gonna share 50 pieces of screwball art on this blog this week! 12 down... 38 more to go this week! Thursday's the official day of my 50th -- I'll post something extra special then! 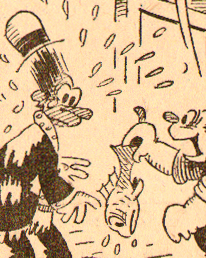