Celebrating my 50th birthday today, here's an extra special treat! 3 full color Needlenose Noonan pages by the great Walter Hoban from 1934! To my knowledge, these are the very first color paper scans of this terrific screwball comic available for public consumption on the Internet.

I don't have a lot of time to write notes on these pages today, so I'll just post them today and in the future I'll share a few more with some notes. Here's a really bad microfilm photo I found of Hoban at a cartoonist's luncheon honoring George McManus (on Hoban's immediate left)  taken on April 28, 1928. 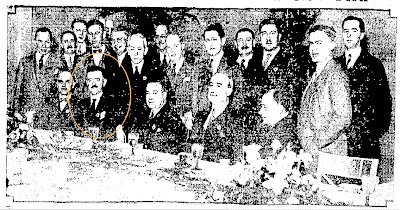 I will say that I love these pages. I think Hoban's art is top-notch, and his comic sensibility is wonderfully skewed. In particular, Discontinued Stories, the screwy topper strip that ran with Needlenose Noonan is a true lost gem of screwball comics. The main character dies at the end of every episode!

Walter Hoban's Discontinued Stories may have been an inspiration to another master of screwball comics, Jack Cole, who created The Death Patrol, a goofy short comic feature about a group of military pilots. Cole's concept was to introduce a new character and kill off an old one in every story! Check out the Jan 21 Needlenose Noonan episode below -- the eye-pleasing striped prison suits are also used in Cole's Death Patrol (for some of those great stories, see my blog on Jack Cole here).

Note the 5th panel in the first episode below of Discontinued Stories. "I'm your sister." "Oh, that's different, then." Hoban slipped  little bits of risque humor like this in his work. Just one example of what makes his comics worth re-discovering!

A special thanks to Carl Linich for introducing me to Hoban's comics! Enjoy these prime forgotten examples of screwball cartooning!

I'm celebrating my 50th birthday by posting 50 screwball comics this week. Here's the score so far: 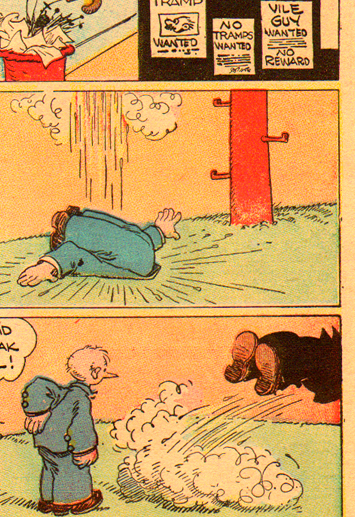