Rube Goldberg On The Fourth of July 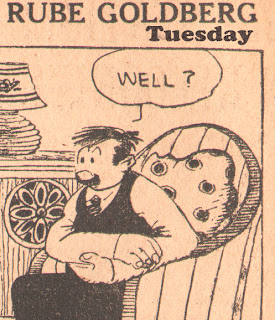 Presenting a quartet for the Fourth: classic holiday editions of Rube Goldberg's dailies. The Fourth was a special day for Rube, as it was also his birthday. Rube (as a kind reader reminded me) was born July 4, 1883.

Rube's comics about the Fourth are both charming and insightful. The image of America that Rube Goldberg reflected to his readers in his Independence Day cartoons is one that can be appreciated generations later because it was based on human nature, which is slow to change.

We forget today how well-known Rube Goldberg was by the 1920s. His daily cartoons were read by millions of Americans. Rube was a great American humorist in the same league as Will Rogers and Mark Twain. It's no surprise that he rarely missed a chance to draw a special Independence Day episode every time the 4th of July (and his birthday) streaked by.

In his special 4th strips, Rube seems to have enjoyed playing with the concept that independence is a relative term, at best. He also threw in a healthy dose of fireworks. As we celebrate the Fourth in 2012, it's enlightening and comforting to read these great comics from almost 100 years earlier and realize that, as Rube might have put it, some things never change.

In our first holiday offering, from 1921, Rube is in rare form. When We Read History to the Children They Think We Are Kidding delivers a pungent commentary on the many "don'ts" necessary for the peaceful co-existence of humans. His depiction of the law-makers as a group of black-suited and top-hatted older men seen through the window of our home is pure visual poetry. As an added bonus, we get a special holiday edition of one of Rube's longest-running series Foolish Questions (1909-34).


In 1924, Rube devoted his strip's entire space to a single drawing, which perfectly supports the gag. The build-up and held breath of anticipation as the rather tiny firecracker is lit, expanded to a full panorama only adds to the humor. According to Goldberg's biographer, Peter Marzio (Rube Goldberg: His Life and Work, 1973, Harper and Row), Goldberg was a perfectionist. Apparently, he sometimes penciled, inked, lettered, and then trashed s strip as many as 10 times before he produced the prefect version (oh, to have those round-filed originals!). In the strip below, the comic figure of the man, so absurdly balanced, is perfectly right, and may have taken Rube a few tries before he got the fuse on this comic lit.

Rube joined the nation in celebrating Independence Day the next year with a delightful comparison of two screwball characters. The puffed-up Hon. Sassafrass Leedom self-importantly merely extols, while the common Philip Macintosh actually asserts "independence." One gets the sense here that Rube championed Americans thinking for themselves, instead of blindly following pompus tradition. Rube frames his contrast by showing who really wears the pants in each of the two families.


The last of my quartet of Fourth cartoons is scanned from my paper collection and touches once again on the true meaning of independence. As long as you obey the rules, you can enjoy yourself to your heart's content. Dig dat crazy hood ornament, by the way.
After he left screwball cartoons in the early 1940s, Rube, the great inventor, re-engineered a new career for himself as an editorial cartoonist. His politics, in retrospect, sometimes naively ran counter to his rugged independent character, such as when he supported Joseph McCarthy long after most intelligent, self-aware Americans had deserted him. But through his entire career and life, Rube was a shining example of both a self-made American and of the freedom of the press to always say, in an entertaining way, when the emperor has no clothes.

Since Rube Goldberg Tuesday's post marks a special occasion, I'm going to skip Mixed Nuts Wednesday this week and leave this post up for tomorrow.

See you on Gene Ahern Thursday.