The Comedy of Escalation: H.M. Bateman 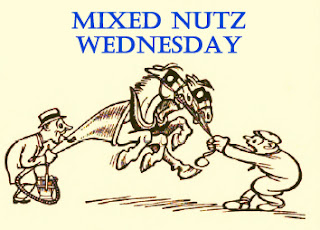 In my Milt Gross postings, I've sometimes coined the phrase, "the comedy of escalation." This refers, in Gross' case, to the build-up of a seemingly trivial event, such as tying a necktie, or making a squeak toy squeak into a visual opera of human madness. About a decade prior to Gross' cinematic screwball escalations, a British cartoonist, H.M. Bateman (1882 - 1970), developed a very similar approach to cartooning, going -- as Bateman himself put it -- "mad on paper."

Bateman's cartoons, which originally appeared in the pages of the British humor magazines Punch and Tatler, are wonderful examples of the comedy of escalation. A man is playing snooker. He considers a tricky shot. He consults another man. Soon, a group is discussing the shot. Then, well... see the incredible build-up for yourself:

This animated sequence comes from the terrific H.M. Bateman website, which is filled with information on the artist and his work. You can also download a free pdf of a 98-page book of Bateman's cartoons from Google Books by clicking here. Bateman was among the very first (if not THE first) cartoonists to innovate a more cinematic and sequential style to cartoons, breaking free of the captioned illustration. Here's another "escalation" cartoon that shows this approach, which was quite radical in the staid pages of Punch: 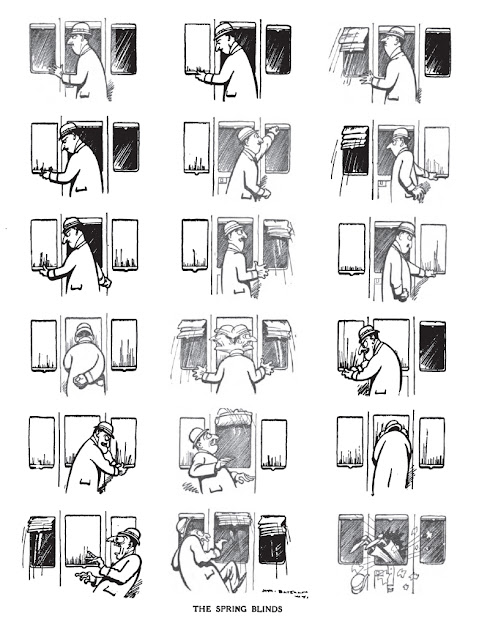 When you compare Milt Gross and H.M. Bateman side-by-side, there's a clear similarity between the both the structures and the tones of the cartoons. I doubt that Gross -- a true original -- was copying Bateman's ideas. I'm not even sure if Gross saw Bateman's cartoons at all. More likely, the two were just on the same wavelength.

As we are discovering, screwballism arises in large part as a reaction to the sudden acceleration of technological innovation that occurs in the early 20th century (and which has yet to aBate, man). Rube Goldberg, especially with his chain-reaction invention cartoons, is probably the prime exponent of this theme in America, in all mediums, not just comics. There are some astounding cartoons on this theme in Bateman's canon, as well. While a far cry from the elaborate, wacky inventions of Rube Goldberg or Britisher William Heath Robinson (a prime subject for another Mixed Nuts Wednesday post), a surreal cartoon like Possibilities of A Vacuum Cleaner nonetheless has something to say about technology as an extension of the human ego: 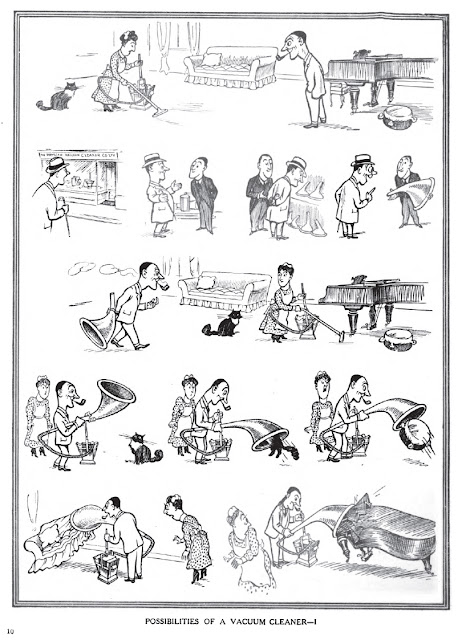 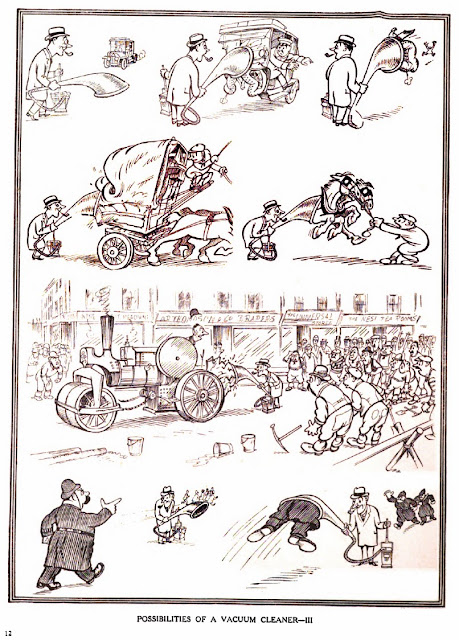 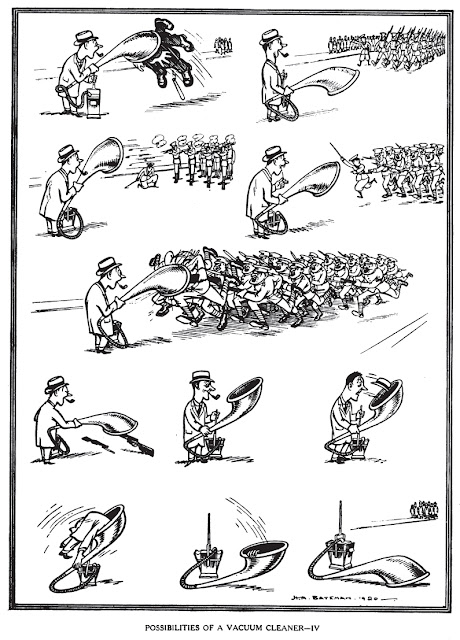 Bateman was very famous in his day. He retired at the height of his fame as a cartoonist when he was forty, and pursued a quite career as a painter for the rest of his life. Bateman's cartoons influenced a whole generation of screwball cartoonists, most notably Harvey Kurtzman, who integrated Bateman's approach into a new system of humor that could been as the apex of screwball comics.

Bateman's cartoons are filled with the visual tropes of screwball cartooning: eyeballs popping out of sockets, bodies flying through the air, wildly distorted figures.Here's a masterpiece of screwball cartoon distortion, Love At First Sight: It's Disturbing Influence: 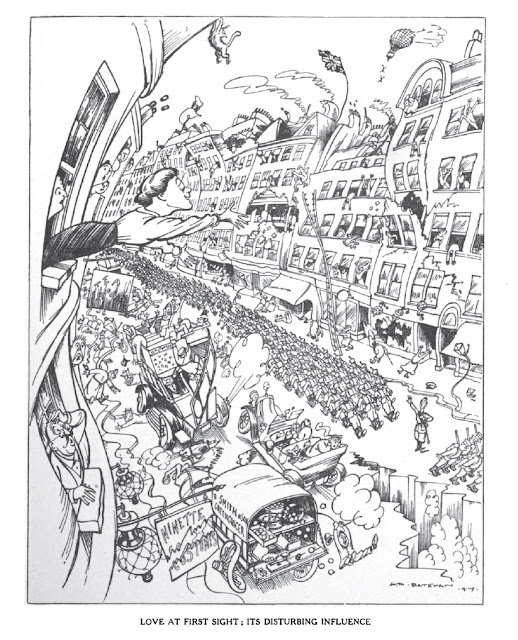 Many folks of my pre-Internet generation first encountered Bateman's work in the pages of Art Spiegelman's and Bill Griffith's Arcade #6 (1976), which reprinted this unforgettable Kafka-esque example of the comedy of escalation: 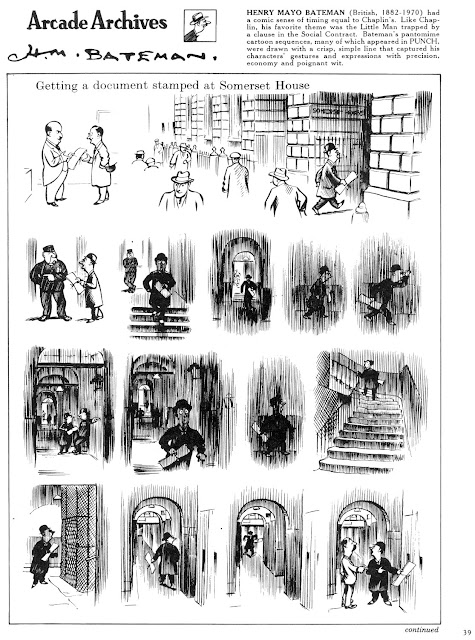 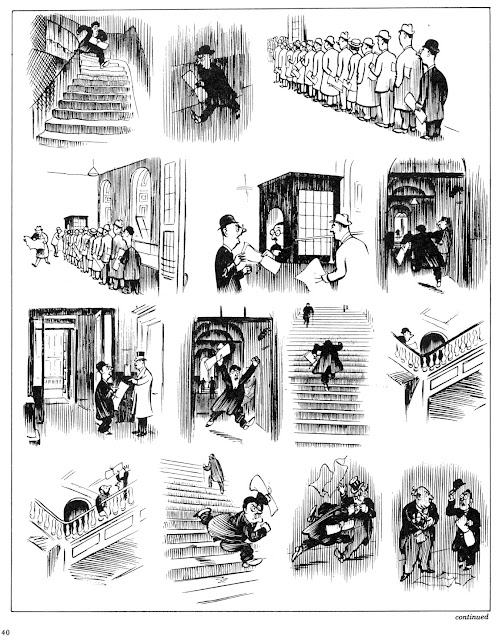 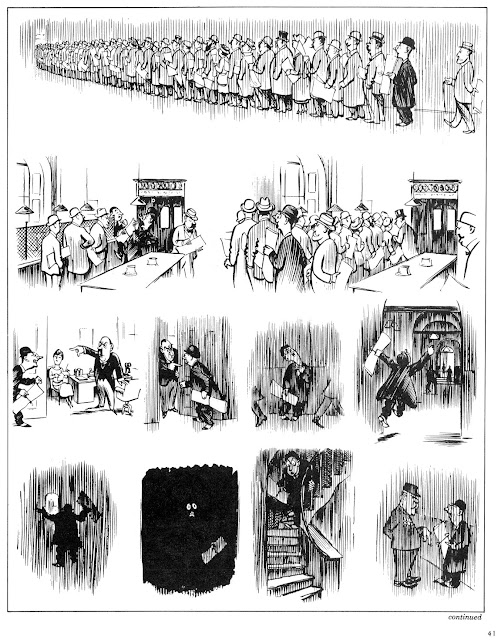 I love the ending of this sequence, with the swan dive from the top of the double-decker bus. In addition to everything else he did so well, Bateman came up with a lot of terrific endings.

While we can't actually hang the label of 'screwball cartoonist" on Bateman, there's no doubt that his ground-breaking innovations in cartoons, as well as his truly funny drawings had a profound influence on the development of screwball comics.