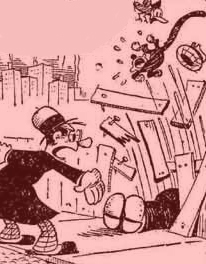 For example, the funny sign: although it was Walter Hoban who originated the use of funny signs, it was Swanson who made it a mainstay of screwball comics, with more frequent and focused use of the device.

Similarly, even though the flip-take (sometimes called a "plop") can be traced to James Swinnerton's turn-of-the-century comics, and seen in numerous prior examples, George Swanson exaggerated the gag reaction to previously unseen surreal heights.

Sidenote: The only other artist of the time who had such wild endings was George McManus in his elegantly rendered Bringing Up Father. However the endings where Maggie hurled a set of dishes, the cat, a rolling pin, furniture, and even sometimes a piano (or am I remembering the Kurtzman/Elder/Krigstein version?) -- these were not flip-takes, but comically exaggerated assaults on a guilty husband by an enraged wife. The device had a whiff of screwballism, but it wasn't built around a gag.


Getting back to Swanson,  what follows is an example of $alesman $am from 1926, late in hiss run on the strip, that shows Swanson's mature development of the aforementioned screwball devices. In this example, Swanson has put a "pre-plop" take in the second panel, instead of the last -- a true master.


Unfortunately, it must be noted that there's also an unconscious racism in this episode, something we find in a great deal of early 20th century American pop culture.

There is much to appreciate in Swan's 1920s and 30s work. In the example below, Swan draws a comical avalanche of books, in addition to the funny figures, exaggerated take, and the funny signs in the background. Oh yes, and the gag! These strips are similar in their sheer density to the Harvey Kurtzman and Will Elder "chicken fat" stories for the early Mad.


In the beautifully paced strip below, Sam gets a telegram (delivered by Eastern Onion) calling him back from a sales foray to New York City. This is a great example of  Swan's two-tier daily. I don't know if he innovated it, but it was yet another way that he increased the density of comedy in his work. If the comics of Milt Gross are about escalation, the comics of George Swan are about density (but possibly panic, and probably exaggeration).

In what little information I've found on George Swanson, it appears that at least twice, he drove from his home in Ohio to Florida and the South to escape the winters. He appears to have been a very fun-loving, high-spirited guy and one can only imagine the high-jinks of these annual road trips.

In his first recorded trip down south, in October of 1925, Swanson visited the Big Bayou Alligator Farm, and wrestled not with an alligator, but with a joke:

And here is the strip that the alligator farm lecturer inspired, offering us a rare behind-the-scenes glimpse of the origins of a rather bizarre gag (note the in-joke title of the strip):

Swanson returned to St. Petersburg and the South nine years later, this time going all the way to Cuba. In the following article, found in a 1934 St. Petersburg, Florida paper, Swan jokes about knowing nothing of cars and being mistaken for a book salesman when he calls on his fellow cartoonist Wally Bishop (author of Muggs and Skeeter, Bishop made his home in St. Petersburg). We learn his hobbies are "motoring and digging up and cleaning up old jokes."


The next day's paper carried this delightful cartoon by Swan, in which High-Pressure Pete says howdy to St. Pete:


In 1927, Swanson left his highly successful Salesman Sam strip (C.D. Small took over, with dazzling results), and started up a variation, called High Pressure Pete, which eventually King Features embraced. As the years went on, Swanson simplified his style and reduced the density of his comics. In the early years of High Pressure Pete, though, he continued his experiments with the form, as we see in this jam-packed, triple-tier daily from 1928:


Just as Swanson wrote a little of his 1925 Florida trip into his comics, he seems to have had another trip to Florida on his mind in 1931, as he sends Sam and his characters on a road trip to the sunshine state:

The sequences seems to conclude with this great example, which plays on the same humor angle around cars breaking down that Swanson generated in his 1934 interview:


Here's some later High Pressure Pete comics from 1935, that show the streamlined style Swanson settled into. These are paper scans courtesy of Carl Linich. 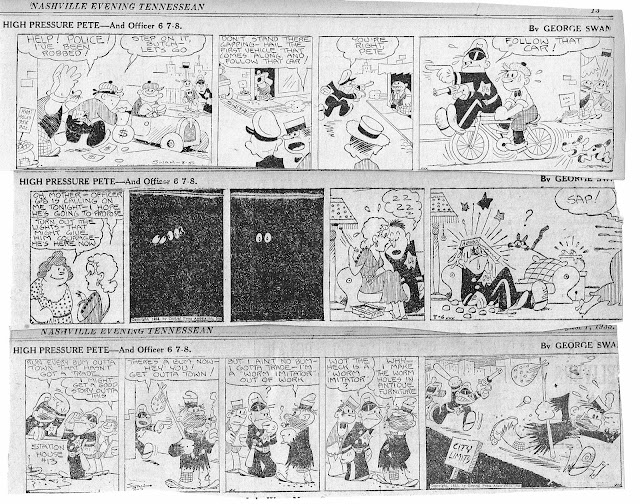 After High Pressure Pete, George Swanson created The Flop Family. Here's a couple of photos of originals that show his simplified, but still solid cartooning:

These originals, and others, can be purchased at the bargain price of $49.99 each  from George Swanson's great-niece. For more information and more photos of originals on this, see my George Swanson page.

That's all for now! I hope you enjoyed this post!