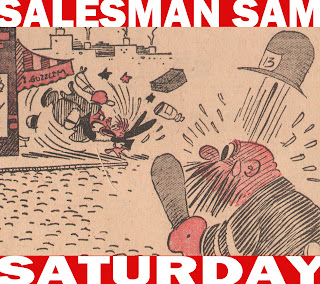 Today I offer a nice paper scan of a very rare Salesman Sam Sunday by it's creator, George ("Swan") Swanson. I think this may be one of the last Sundays that Swan did before C.D. Small took over the series.

The page is a wonderful example of the streamlined, virtuoso cartooning style of George Swanson. Oddly bereft of its trademark background signs past the first two panels, this episode is all about movement and action.And simplification. The hands of Swan's characters are round blobs, feet are (Charles) Shulz-like black ovals, and the cityscape backgrounds are merely suggestive. The panels are filled with sweat drops, swirls, stars, movement lines, and sound effects. By 1927, Swan has mastered the screwball cartoon vernacular like few others.


In last week's Salesman Sam essay, we looked at the movement of energy in a Sam by C.D. Small. I made the point that screwball comics have wild and unpredictable (if logical) directions of movement when compared to comics of other genres. Here's how the movements map out in today's Swan comic: 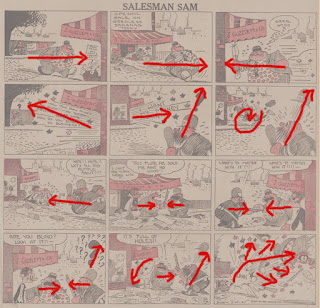 It's all about conflict and comically explosive resolution. The top tier gives us two stable panels, with solid left-to-right movement. The third panel in the top tier initiates a conflicting movement.

After this, we get a tier of relatively minor explosions of random movement. The exaggerated takes shown here would be a highlight in many other artist's strips, but Swan had a much greater range for presenting visual chaos, placing him in the neighborhood of Milt Gross and Bill Holman.

The 3rd tier delivers more building conflict, which continues into the first panel of the last tier. Then, the last two panels explore the energy with the greatest velocity and number of directions of all the panels, proving a satisfying resolution.

All the Best,
Paul Tumey
Posted by Paul C.Tumey at 4:08 PM