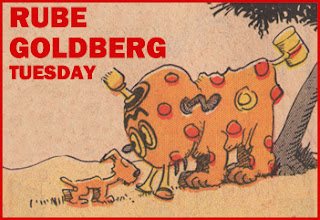 Here's another astonishing Boob McNutt screwball Sunday comic by the great Rube Goldberg. Last week, we looked at a 1919 Boob McNutt Sunday. This week, we jump forward in time, to 1931, to present to you an episode from the remarkable "Boob's Ark" story sequence.

"Boobs Ark" is one of the last great undiscovered continuities of 20th century American newspaper comics. Lasting roughly 18 months, from 1931 to 1932, Rube delivered the longest story of his career, filled with invention and dozens of fantastic whimsical creatures.The storyline picks up when Boob McNutt, our accident-prone and unlucky good guy tries to marry his sweetheart Pearl on an airplane (flying was all the rage in 1931). Naturally, a storm ensues, and Pearl falls off (safely), leaving Boob to fly wildly across Africa until he crashes on an uncharted desert island. There, he finds an assortment of amazing creatures.

With the help of Professors Germ and Microbe, he builds a huge ark and attempts to transport the magical menagerie back to the United States, where he will become rich and famous. Of course, nothing in Boob's life goes as planned.

The wonderful thing about the Boob's Ark story is that virtually every week Rube introduced a new creature of his own invention. In this early episode, set on the desert island, we meet the Man-eating Biffsniffle, a sort of Swiss Army pocketknife of evolutionary design who is so cute and friendly-looking the "man-eating" moniker is surely in fun. With a hammer for a tail, and a whisk broom on his head, the Biffsniffle also sports an electric snout that can be used to light cigars: 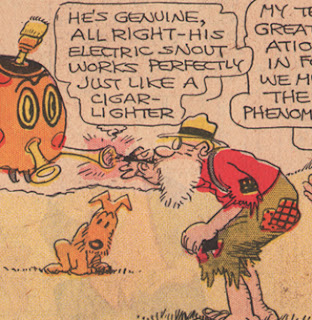 Boob and the scientists manage to capture on film the Biffsniffle shrinking and growing, something that happens once every 50 years. Boob holds the film up in triumph... 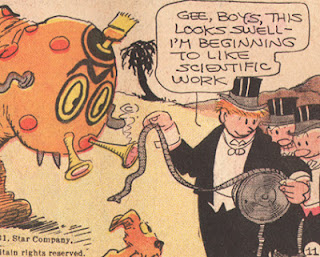 And unfortunately, the Biffsniffle's electric snout ignites the film and, well... 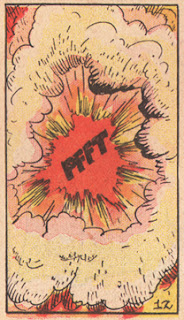 In almost every episode, Rube manages to invent a splendid new creature and then contrives to have Boob destroy the rare animal, perhaps as a way to not have to draw the same creatures over and over. Rube, the nation's amiable critic, had a fanciful, childlike side to him, as well -- and it served him well in the amazing Boob's Ark story.


That is all,
The BrownWhite-Bearded Tumey 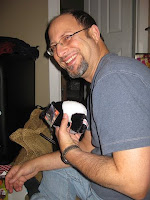