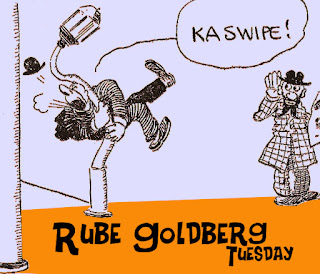 Here's another 1916 Rube Goldberg gem, reclaimed from the tissue-filled dustbins of history by our friend and fellow screwballist, Carl Linich.

Since, for the last week, I've been sneebing my head off due to a bad code, I thought this strip would be abbropbriate. Sniff!

There are several interesting aspects to this example. First is Rube's shift from the typical crowded group of several vignettes in a large panel (a pattern that evolved from his first work as a sports cartoonist) to a more spacious and sequential breakdown.

Second is the dry, dead-pan delivery of the strip. It's almost in Ernie Bushmiller (Nancy) territory. Rube shows us 5 scenes of mysterious events and then closes with a panel that explains what it's all about. A pure, perfect structure.

Lastly, this strip is a standout because Rube allows his talent for creating nonsense words to have front and center stage. Compare his spacious speech balloons in these panels to Windor McCay's of the same period. Rube puts lots of white space around his very large words. It's not often -- if ever -- acknowledged, but Rube was an an early master of comic strip speech balloon design. The nonsense words kaswish, kaswap, and kasloof are anteceedents of Gene Ahern's "Nov shmoz ka pop?" in The Squirrel Cage.