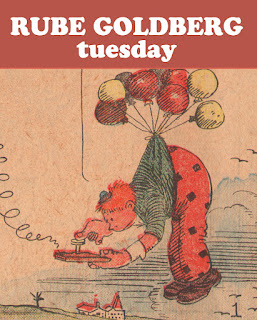 Presenting an extremely rare 1919 Boob McNutt Sunday page, scanned from my own paper collection, in which we see the younger Rube Goldberg had quite an edginess to his humor.

In his book, Breakdowns, Art Spiegelman has a genuinely funny underground comics style Rube Goldberg style invention cartoon - a chain reaction suicide machine. Functioning as both a satire and a tribute, Spiegelman's Goldberg suicide invention cartoon is -- I have been surprised to discover -- actually not too far off from the dark humor of Rube's early, mostly forgotten and long unseen work, which sometimes used suicide as a humor element.

By the way, for any readers of this blog who aren't familiar with Spiegelman's 1978 collection of comics about comics, I highly recommend the spiffy new edition of Breakdowns published a couple of years ago (good luck finding a copy of the original edition that you don't have to mortgage your house to afford). If you like the analysis in blogs like this one, then you'll appreciate this fine book, one of my favorites. For those folks who know Art Spiegelman only as the author of Maus, he also was one of the first, and continues to be one of the most insightful analyst-historian-researchers about comics. Since he's an artist, too, we get the fascinating experience of a magician telling us how the trick is done, while still entertaining and mystifying us. You can get Breakdowns cheep here from Amazon, and be sure to read the interview with Art, which presents his answers in his own handwriting, appropriately adding levels of visual information to the verbal, in the same exploratory spirit of his book.
Rube Goldberg worked as a cartoonist for 14 years before he won a color Sunday comic page, in 1918. He called his new series Boob McNutt. Rube liked the word, "Boob," but not for reasons that modern readers may think. In his day, a boob was simply someone who did something stupid. Goldberg had several series that used the b-word: Boobs Abroad, Boobs at the Fair, The Boob News, The Boob Family, to name a few. Boob's surname is an inspiration. Nutt was also a word in play at the turn-of-the-century, that meant "crazy." (It's interesting how words that once were slang for stupid and crazy are now slang for sexual acts). Adding the Scottish "Mc" somehow makes it all funnier -- no racism implied (my guess -- although there was plenty of racism in Rube's early comics).

Rube Goldberg created somewhere around 850 Boob McNutt Sunday pages, writing and drawing them all himself from 1918 to 1934. Most of the series is a shaggy-dog adventure-comedy continuity, with the 2-year long "Boob's Ark" story of 1931-32 (not to be confused with the later panel called Boob's Ark) being the longest sustained comics continuity of Rube's career, and a highpoint in American newspaper comics. (I'll share some of the "Boob's Ark" pages at some point in the future).

A scholarly note: There is some confusion as to whether Boob McNutt started in 1915 or 1918. It appears that the strip may have begun in one paper only, and then went into wider circulation in 1918. However, I have not seen any evidence of any Boob McNutt pages created prior to 1918. If I find any definitive information, I'll update this post and my page on Goldberg.

The first year or two of Boob McNutt offered single-page contained adventures. The pattern was usually the same one we see in today's offering. In the first panel, we see Boob McNutt attempting his suicide. He is then saved by some kindly-hearted soul, who usually gives him a task to help him feel valuable.


Of course, this is the screwball master Rube Goldberg we are talking about, so the tasks are often completely absurd, such as helping a man collect eagle eggs. Boob, being as -- well, a boob, screws up the task -- often nearly killing his benefactor. At the end of the episode, the person who stopped Boob from committing suicide is so angry with him that they are trying to kill him.

After a year or two, Rube introduced Pearl, a love interest who looked like a Gibson Girl. He switched Boob's foiled suicide attempts with foiled courting and then marriage attempts. His earlier version of the Boob McNutt formula offers a great deal of black comedy, screwballism, and touches of surrealism. Today's offering is a classic example of the early Boob McNutt series.

Rube stepped up his game for his Sunday page.

Notice how Rube, who had been publishing cartoons every day for fourteen years prior to creating this page, offers pretty polished versions of his comic characters. He even contorts and distorts the figures as if they are made of rubber. His use of pattern, by no means limited in comics to him, adds a great deal of visual richness.

The first and last panels resonate with his famous chain-reaction invention cartoons, which he had been drawing for 5 years by the time this comic was first published. In addition to the art, Rube writes some nice gags into the dialogue, such as the square egg bit. My favorite is Boob happily proclaiming, "It's great to be young and brainless!" Lastly, as I usually do, I'll rave a bit about his bold lettering "font," which I really enjoy.

I'm not sure what to make of it, but I have observed many of the same elements employed by Jack Cole (Plastic Man)  - patterns, distinctive bold lettering, crazy inventions, and of course -- contorting the human form. Check out my article on Cole's style here. I've researched Cole's hometown newspaper that he read as a boy, and yes -- the paper printed Goldberg's cartoons. Here's an example from 1931, when Cole was 16 years old:


Whether Rube Goldberg  was a direct influence on Jack Cole, I don't know. However, many of the elements that Goldberg uses in today's 1919 comic became staples of American  humor comics in the first half of the 20th century -- they were certainly working on the same side of the mountain.

All text copyright 2012 by Paul Tumey