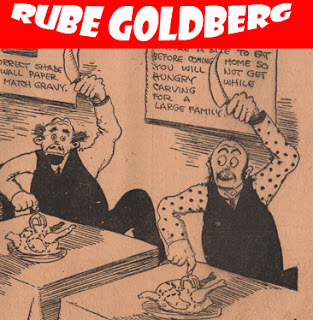 In 1915, Rube Goldberg was on fire as a creator. The satirical subjects and the grotesque imagery that he poured into his ever-shifting kaleidoscopic array of daily comics from about 1915-1917 are among his best work.

Astonishingly, nay... shockingly, most of these great comics have not appeared in print or screen since their original appearances, nearly 100 years ago. How can this be?

A dream project would be to reprint the complete 1915-1917 daily comics of Rube Goldberg, in sequence. It is only then that this seminal screwball master will assume his rightful place in culture as something more than the guy who made goofy, over-complicated inventions to accomplish something trivial. Aside from that, it would be pure fun to read such a collection. I have managed to gather most of the daily comics from 1915 to 1917 in their original published form, and I can assure you that almost every day offers something delightful.

As I write this, it is the weekend of the Thanksgiving of 2013. In between cooking and attending to guests, I have found a few minutes to dig into the archives and sift out Rube's comic for Thanksgiving, 1915. It's a delicious main course, presenting a turkey-carving training school that Rube calls "The Ambidextrous Society."


Note that the students are training to carve the turkey left-handed. Rube himself was ambidextrous. He drew with his right hand, but golfed as a lefty. In fact, he published a humorous essay in 1924 called. "Left Handed Golf Courses: Our Greatest Need."

What makes the cartoon above succeed, as far as I am concerned, is the strong composition. The carvers almost look a like machine assembly line. Look at the face and body language of each of the seven men in the strip -- each is different, unique, and funny. When you read the text in the speech balloon and the signs on the wall, it presents a dryly understated comedy that contrasts with the extreme visual-physical comedy of the drawing. This contrast provides a richer reading experience, with two styles of humor offered.

Rube had a 16 x 13 inch space to fill Monday through Saturday. This is a lot of room, practically the space allotted in newspaper fifty years later for ALL of their daily comics. While he had some series, such as "Foolish Questions," and "Father Was Right," that he would repeat sporadically, Rube also drew numerous one-shot comics. Sometimes they were a large single panel, and other times times they were broken up into a complex matrix of panels, or smaller comic strips. To add to our main course, here are two tasty Goldberg side dishes from the month of November, 1915 -- picked almost at random:

Pretty swell stuff, if you ask me. And -- certainly worth a second life, especially in this golden age of comics publishing.

Speaking of comic publishing, the new book THE ART OF RUBE GOLDBERG, selected by Jennifer George that has just been published is doing well. I feel so honored to have been a part of that project. It's charting as a #1 bestseller on Amazon in the Comics and Manga category. Legendary mail order guru and tastemaker Bud Plant (visit his site, here) featured it in his latest email catalog and gave it a "highly recommended" note (thanks, Bud!). I've been buying books and comics from Bud Plant since the 1970s, so it's truly a thrill to be in his catalog!

Here's some other cool links related to the book:

'Art of Rube Goldberg' More Than Crazy Contraptions -- LA Times (I'm gratified to see they got the book's goal to show ALL of Rube's work, including the celebrated invention cartoons)

Design Books by Chipp Kidd -- The Wall Street Journal (I'm excited to see that two of the six books Mr. Kidd recommends have my work in them -- The Art of Rube Goldberg and Society Is Nix.)

Photos from the book party for The Art of Rube Goldberg (with Jennifer George, Al Jaffee, Brian Walker, and Andrew Baron in attendance) 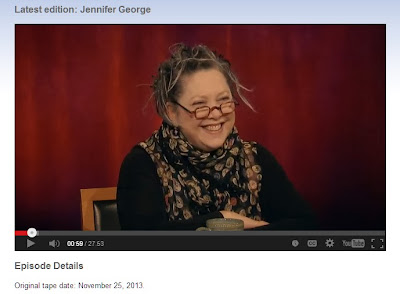 That is All (for now),
Paul Tumey