Rube Goldberg's Drawing Board, My Feet, and The New Book 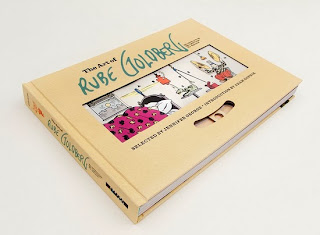 It's official! The deluxe, super-sized book, THE ART OF RUBE GOLDBERG is available for purchase wherever fine books are sold!

After two days on the market, the book has skyrocketed to the #1 bestseller in Amazon's "Comics and Manga" section!

I personally am very proud of this volume, having put a lot of work into it. I am greatly honored to be a part of this project. The book contains three essays by me, and about 25% of the contents come from material I supplied.  I helped select much of the contents and wrote at least half the captions, some of which are little mini essays in themselves. I also created all of the back matter: a Rube comicography, bibliography, and timeline -- all of which are by far the most complete and accurate versions available.

But that's just a part of this huge project. There's also original essays about Rube and work by the legendary Al Jaffee, comics historian (and writer of the Hi and Lois comic strip ) Brian Walker, Sunday Press curator Peter Maresca, comics scholar and collector Carl Linich and  more. The best stuff are the essays by Rube's granddaughter (and the books author) Jennifer George -- you get a sense of Rube as a person more than anything else that has ever been written on him. And the whole package is thoughtfully assembled and beautifully produced by the great folks at Abrams, led by Charles Kochman. 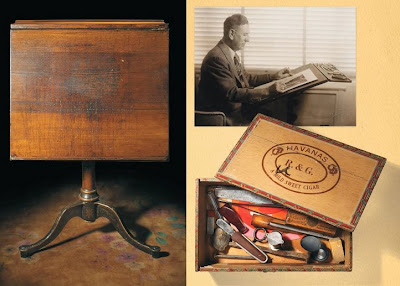 There's a ton of comics, art, and photos in this book. In fact, there's some spectacular photography by Geoff Spear, who you may know from other fabulous books like Chipp Kidd's Peanuts: The Art of Charles M. Shulz. In one page, we see Spear's photo of Rube's drawing table. The lighting and angle of view reveal the many indentations and scars created from over 65 years of use.


I actually got to see this drawing table when I spent a week in New York City in August of 2012 working on this book. Jennifer George graciously put me up at her place for a few nights and this drawing board is in her living room. I asked Jennifer how long Rube used this table for, thinking that perhaps it just one of many he had. She said, "As I understand, this was the one." And indeed, you can see the very same drawing table in early photos of Rube. This historical cultural treasure was located at the foot of the futon on which I slept. On occasion, during the nights I slept there, I would stretch my legs in my sleep and my bare toes came into contact with the surface of Rube's drawing board. I remember waking up a few times with an electric jolt when I realized I was barefooting Rube Goldberg's drawing table. Sorry, Rube!

I personally am very proud of this volume, having put a lot of work into it. When I was 14 years old, I read Peter Marzio's book, Rube Goldberg: His Life and Work (Harper and Row, 1973).  Unlike most folks who associate Rube Goldberg with nutty inventions, I imprinted upon his inexhaustible fountain of creativity and lyrical smart-assness. To me, the spirit in which Rube created his comics is in direct lineage with the same spirit that inspired the Underground Comix of the 1960s and 1970s, and the self-published Newave comics of the 1980s and 1990s. Many people can trace the cultural lineage of these modern comics movements back to Will Elder, Harvey Kurtzman and the Mad gang, but rarely further back. Rube Goldberg, who started his cartooning career in 1904, is just too far back in the mists of time for most folks to see his connection to comics today - but it's there, make no mistake. After all, Harvey Kurtzman drew Rube's characters Mike and Ike on city sidewalks when he was growing up -- his first cartoons.


It doesn't help that there has never been a decent book on Rube Goldberg that presented his work in all its varied richness and brilliance. When Rube was alive there were only a scant handful of books that reprinted just a tiny fraction of his comics, such as the 1909 Foolish Questions book. After his death, the emphasis has been on his invention cartoons. These cartoons are indeed brilliant and sell books -- but to just present this part of Rube's work to the public is like only showing the world Picasso's Cubist works. There's so much more to explore, appreciate, and embrace. There's never been a book that attempted to cover all aspects of Rube's career -- until now. The Art of Rube Goldberg has a healthy sampling of the inventions, but there's tons of other cartoons, photos, articles, and items that reveal the fullness of this astonishing body of highly influential work.

A few months ago, to help promote the book, I created a three-minute video using some of the great art to be found in the pages of this extraordinary compendium. For the music, I used an old Public Domain 78 recording of a song that Rube Goldberg actually wrote, "I'm The Guy." The publisher, Abrams, liked the video, but didn't want to give away so much yet about the contents, so the project was shelved. Now that the volume is officially released, and on the market, I'd like to share this video with the loyal readers of this blog. Enjoy!

All text and proprietary photos copyright 2013 Paul Tumey.
Posted by Paul C.Tumey at 10:48 AM