A Week of Rube Goldberg's 1918 Comics Featuring Mike and Ike 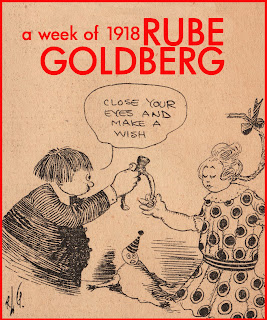 In just a few days from the time this post is being written, the brand new, deluxe art book entitled The Art of Rube Goldberg (selected by Jennifer George, Abrams ComicArts, 2013)  will be available for purchase. As my friend and colleague in the book's creation, Carl Linich recently put it, "There has never been such a rich and thoroughly representative collection of Rube's work."

The book contains hundreds of rare cartoons and art by Rube Goldberg -- the majority of which have not seen the light of day since their original appearances as much as 100 years ago. There's also lots of cool photos, original art, and items selected from the Goldberg family archives.

I am quite proud of my own contributions to the book. In addition to doing some editing work on it (with Charles Kochman), and wrangling about a quarter of the book's content, I was able to buckle down and do some serious writing and comics scholarship on this bad boy. The book contains my essay exploring his Foolish Questions cartoon panel and my essay on his 1916 animated cartoon series. It also contains my 12-page survey of Rube Goldberg's comic strips of the 1920s and 1930s, "Restless Storyteller."

The book also contains my Rube Goldberg Timeline, list of his comic strips (this took 3 months of intense daily work to research, and I probably still missed some comics), and a list of his published writings. I've been studying and writing about comics for years, and this marks my first "big time" publication. Needless to say, I'm thrilled to be a part of it!

I plan to write a column about the making of the book and some things I've learned about Rube Goldberg and comics in the next installment of Framed!, my monthly column at The Comics Journal. You can see a nice preview of several interior pages from the book, here.

As jam-packed with screwball comic goodness as The Art of Rube Goldberg is, there's a lot of great material and ideas for sections that we weren't able to get in, due to space restrictions. One idea we wanted to do was to reprint a entire week of Rube Goldberg dailies. The idea was to recreate for our readers the Monday-through-Saturday context of Rube's work -- which has been largely lost. From 1909 to 1927, Rube's daily comic strip featured something new and different every day. He had a number of series, such as Mike and Ike, Foolish Questions, and The Weekly Meeting of the Tuesday Ladies' Club, that he rotated,  more or less randomly (although the The Weekly Meeting of the Tuesday Ladies' Club did actually run on Tuesdays). Today, when we think of a comic strip, we automatically think of a continuing series with continuing characters, like Nancy, Pogo, L'il Abner, Popeye, Blondie, Dilbert, Garfield, and so on. Rube Goldberg was different. From Monday through Saturday for years, he filled his rectangular space on the newspaper page with a dazzling variety and comic richness that remains unmatched. For the most part, Rube didn't create his comics around characters, but instead around ideas -- such as our confounding propensity to ask questions when the answer is right in front of us.

Because most books on Rube, The Art of Rube Goldberg included, present a selection of his comics and not the whole she-bang, the impact of Rube's kaleidoscopic komedy is lost. It's only a matter of time before a savvy publisher reprints a full year of Rube's work, and people will realize just how inventive this cartoon genius was. In the meantime, here is an "outtake" from The Art of Rube Goldberg, a full week's run from the first week in April, 1918, created from paper scans of items in my own collection.

For much of 1918, Rube featured in his daily strips, his dubious doppelgangers, Mike and Ike. These are perhaps Rube's longest-lived characters, having been created for Rube's very first Sunday comic in 1907, The Look-a-Like Boys. Later in 1918 -- after our sample week -- Rube dabbled with the idea of continuity in 1918 (something I wasn't aware of when I wrote my essay about his continuity comics for the book -- it was only when I purchased a set of strips from 1918, after the essay was already completed and sent to the printers,  that I realized this), sending the boys to Europe to fight in the last days of World War One. Here, we have perhaps the quintessential example of the strip, with the boys running to meet their elusive maker so they can finally learn their true identities-- an early comic strip version of Waiting For Godot. Note the date: April 1, 1918.

On the next day, Rube offered an installment of The Weekly Meeting of the Tuesday Ladies' Club. This large, single panel cartoon ran on Tuesdays from May 1, 1917 to September 27, 1921 (I'm proud to be able to offer this date range -- it took me days of research to figger dis out!). There's a large section of this lost gem from Rube's oeuvre in The Art of Rube Goldberg, introduced by his grand-daughter, Jennifer George. The strip is one of Jennifer's favorites, and mine too.

Rube developed his new strip from his observations of his new bride's social gatherings. By today's standards, some of the gags might be considered insulting to women, but in actuality, they are simply insulting to silly, stupid people. Nearly everything Rube created falls into that category.

The example below is typical: a meeting in which the Ladies have invited a guest to enlighten them upon a subject. In this case, it's constitutional law. To fully appreciate this strip, it's important to realize that the United State's Women's Suffrage Movement was going full-strength  in 1918. President Wilson had proposed that American women should be allowed to vote (the measure didn't pass until 1920). So, part of the joke here is that the Ladies are preparing themselves to soon cast their first votes.

On another note, pay attention to the various silly names of people and things: Professor Stall, Bink vs. Bink, and so on. This is one of the pleasure of reading Rube Goldberg, who had an ear for nonsense sounds like few other cartoonists.

Lastly, note that this Tuesday strip offers an entirely different layout than the Monday strip. In fact, the Tuesday offering is actually comprised of two different comics. Slackers was a panel series that Rube created regularly during this period. Often, there's a thematic connection between the comics in Rube's sub-divided properties. In this case, both strips offer perspectives on the battle for power between the sexes.

On the following day, Rube created an episode of Father Was Right,  yet another of his randomly presented series. This series ran sporadically from 1915 to 1921. Rube had a close and admiring relationship with his father, Max Goldberg. Thus, once again, we see that Rube drew from his own life to develop his comic properties. Note also that, once again, we have an entirely different layout concept from the previous two days. Monday offers a straight-no-chaser 5-panel strip. Tuesday gives us two panel strips, with one being quite large and detailed. Today, we receive two multi-panel comic strips -- one large, one small. The small strip, I Never Thought of That, was also a stock player in Rube's inventory of semi-regular features. Even though neither of these examples in the Wednesday slot are exceptional, they do offer Rube's genuinely funny takes, in panel 5 of Father Was Right, and panel 4 of I Never Thought of That.

The following day, Thursday, Rube treats us to another Mike and Ike. This time, one tried to get the better of the other, and fails -- as usual. The gag about Mike wearing out his brain trying to figure out the situation in Russia is both a topical reference, and a nicely absurd excuse.


Rarely did a week go by in the first half of the twentieth century without a Rube Goldberg invention of some kind appearing in America's newspapers. In addition to the A-B-C chain reaction diagrams, Rube also worked inventions into his work in numerous ways. In his Friday offering, he provides a three panel sequence, demonstrating the use of his "Newsdealer's Cure."


Rube rounds the week's output off with another Mike and Ike and a classic Goldbergian drawing of an absurd car crash that reminds me of the slow-motion automobile pile-up from Jacques Tati's Traffic.


Whew! In just one random week, Rube gives us nine different comics in a dizzying variety of layouts that comment on human nature, technology, war, women's rights, and identity itself. You can take similar petri dish samples of Rube Goldberg weeks from other years and get entirely different mixes of different strips and themes, but the creative brilliance is always present!

BONUS! You can read a great interview with Abrams ComicArts' Editorial Director, Charles Kochman (and the co-editor of The Art of Rube Goldberg) here.  The existence of this book is due in large part to Charles Kochman's vision and drive to make it happen.

BONUS TOO!
Rube clip from Edward R. Murrow's "Person to Person" from March 1959. He is seated with his wife Irma.

Screwballingly and Enthrallingly Yours,
Paul Tumey