A Screwy Rube Goldberg Daily From 1916 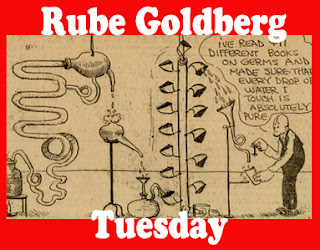 Here's a fabulously screwball Rube Goldberg daily comic from 1916. The first classic Rube Goldberg chain-reaction invention cartoon appears to have been published sometime in 1914. However, Rube had been inserting wacky inventions into his dailies as early as 1910, and today's 1916 comic is a great example of Rube satirizing inventions and fads in a daily strip.

This example comes from the collection of Carl Linich (thanks Carl!). I recently had the chance to pore over Carl's collection of 1916-17 Goldberg dailies. I was struck at first by the sheer enormity of these comics -- they are 14 inches wide and 6.5 inches tall! You could fit 8 of today's daily comic strips into one of these beauts!

I was also struck by how creative Rube was at this point in his career. He was at a creative peak, one of many he would reach in his 58-year career in comics. This early peak, with the extreme confidence and high-flying inspiration makes sense when you think about his path up to 1916. He started out as a rank amateur on a paper in San Francisco in 1904. By 1908, he moved to across the country to New York City, with no job offer in hand. It was a bold move and a big risk. Rube finally landed a job at the New York Evening Mail and in a couple of years became one of the top cartoonists. By 1916, he was firmly established, and his cartoons were being published in other newspapers. He was making an astonishing $50,000 a year. I've read that the whole idea of comic strip syndication came about because papers in other cities clamored to run Rube's dailies. His comics were sort of the Saturday Night Live or Colbert Report of their day.

Here, we see Rube satirizing the fad of drinking pure water. In the second panel, we get a classic overly-complex Rube Goldberg contraption for distilling water. Rube also had a great gift for making up nonsense words that were the verbal equivalents of his wacky visuals. In the comic below, we get to see the doctor pompously utter that "...you've got nine kinds of typhoid germitis of the appazoodiks."

One of the remarkable things about Goldberg's dailies was that he had no set pattern. He was comic's first, and greatest general humorist. For decades, there was something new and different from Rube every day. He did have little series that he would repeat as inspiration struck. The above comic is from a series called It's All Wrong. There would be a different name in the title each time: "It's All Wrong, Mendelssohn, " or "It's All Wrong Johnson," and so on.

With a Rube Goldberg daily, you really got your money's worth, since he would also throw in a panel cartoon that often had great gags. Here, we see one of his many panel series, I Never Thought Of That.

It's incredible to think that, during 1916, Rube not only made one of these a day -- and some of the other dailies in Carl's collection are quite elaborate -- but he also drew the many thousands of images needed to make seven animated cartoons (The Boob Weekly) by hand! As if that weren't enough, Rube also courted and won the hand of Irma Seeman, whose father owned the White Rose Tea and Grocery empire. Rube was lucky enough to have Irma for his wife for the rest of his life. It would appear that, for Rube Goldberg -- screwball master and creator of the It's All Wrong series, 1916 was all right!

Note: in typical fashion, I'm publishing a Rube Goldberg Tuesday on a Wednesday. I'm having a very busy period but will get back onto the daily track soon!