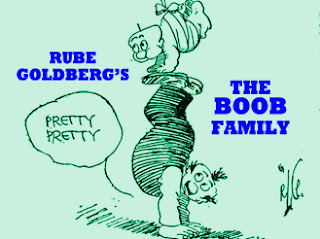 That generative genius, Ruben Lucius Goldberg, was a wellspring of new ideas. His biographer, Peter Marzio, estimated that Rube created somewhere around 50,000 cartoons in his 56-year career from 1904-1960. It's astonishing that, in this era of  enlightened comics scholarship, this massive body of work by an American icon remains largely unknown and undiscovered. Much of Rube's humor is as effective today as it was 100 years ago, because it is based on human foibles, rather than topical events. His satirical-surreal-screwball approach remains accessible to audiences of today.

A few months ago, as I worked on the forthcoming new Rube Goldberg book in the offices of Abrams  Books in New York City, it hit me: Rube Goldberg is the Jack Kirby of American newspaper comics. Just as Kirby created an astonishing flow of new ideas, new characters, and new stories -- so did Rube. As much as there is a Jack Kirby "Universe," so is there a Rube Goldberg Universe. I sat in an office where every square inch was covered by Rube's cartoons. Every surface, every tabletop, every desk held little piles of his cartoons. We filled shelves with his works as we sorted them. We were literally hip-deep in the man's work.

In the same way that Jack Kirby appears to have been touched by boundless inspiration and energy, Rube Goldberg created numerous excellent comic series. Where most American newspaper cartoonists picked one or two ponies such as Blondie or Bringing Up Father, and rode them for years, Rube Goldberg made a different comic strip every day for decades. Within his vast body of work, Rube sometimes made little mini-series, and sometimes created new forms of comics, such as Foolish Questions and his famous invention cartoon, which he randomly repeated for years. As if that weren't enough, most of Rube's published daily comic strips are sub-divided into two, three or more smaller comics, in an early version of a Chris Ware style presentation. Most dailies in from 1914 or so until 1923 are very large matrices of comics, humor, and surrealism.

For a few weeks in early 1917, part of this matrix included The Boob Family, a trenchant satire of family life featuring Mr. and Mrs. Boob, and their homely infant, Otto. Here's Rube's full daily from January 17, 1917 -- the first appearance of The Boob Family.

Small families with newborn babes are used as comic fodder by several early American newspaper cartoonists including George McManus (The Newlyweds) , George Herriman (The Dingbat Family) and later, Milt Gross (Nize Baby). Goldberg's take is characteristically among the screwball of the lot, mainly due to the wizened old man appearance of the baby Otto. Prior to 1916, when Goldberg married Irma Seaman, his comics made rare -- if any -- mention of family life. With a new wife and successful career , a baby was just a matter of time (his first son Tom was born in 1918). So in 1917, we see 34-year old Rube contemplating family life and fatherhood. In a very real sense, Rube is making fun of his own misgivings and fears of a formerly unfettered man about married life.

By all accounts, Rube and Irma had a very successful marriage. In fact, they were married 54 years, until Rube's death in 1970. In his Boob Family strip, however, there is very little respect or love bestowed upon Mr. Boob in his family. Most of the episodes center around Mr. Boob vainly trying to retain his stature as head of the family in the face of Mrs. Boob's imposing presence. The baby Otto also seems to trip up the schemes of his Dad  -- although Goldberg has little feel for the actual experience of raising a child, yet. In fact, the whole scheme seems to be less about the adventures of a new family and more about how the whole family concept is rigged against the dad from the start. It's interesting to realize that in 1952, Rube Goldberg presented cartoonist Hank Ketcham a National Cartoonist Society award (called a Reuben after Rube) for his Dennis the Menace series -- a concept Rube had briefly explored in his own way before Ketcham was even born. The combination of the silly drawings and the deadpan delivery of a screwball family dynamic in the 1917 Boob Family comics have some promise, and it's too bad that Rube only explored this concept for a couple of weeks before discarding it and moving on.

We see this pattern over and over in Rube's career. Comics historian Bill Blackbeard called Rube:

"... the San Francisco cartoonist who spent the undeniable talent to produce at least one great comic strip on half a dozen less than properly accomplished and sustained works over a long and busy lifetime." (introduction, Bobo Baxter, Hyperion Press 1977).


Rube Goldberg's  genius for a continual flow of invention created a brilliant, but chaotic body of work. This may be the reason that most of the work of such a seminal and important figure in comics history has remained largely out of print for generations. In any case, The Boob Family is a fun read, even in its brevity.

Here's a selection from the short run of wonderfully screwball Boob Family by Rube Goldberg. I've put in a little work on digital restoration of these.


Many thanks to Carl Linich for supplying the original comic strips for this post from his own collection. Check out his blog devoted to Gene Ahern's great screwball comic, The Squirrel Cage. 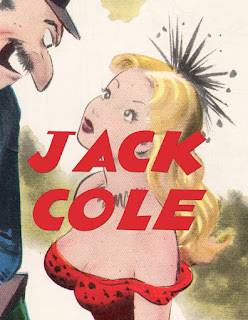 For a different screwball pitch entirely, be sure to check out my other blog, Cole's Comics, devoted to a study of the life and work of the comics and cartooning master Jack Cole. Currently, I'm running a 12 Days of Cole-Miss event, where I'm sharing coll new Jack Cole discoveries every day until December 25! 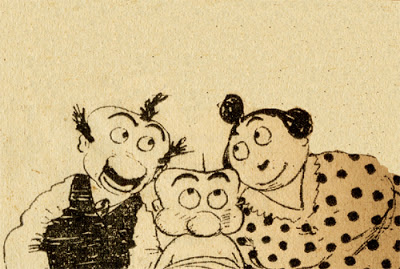