Before Bob Clampett and Will Elder, There Was The Comic Anarchy of H.C. Greening 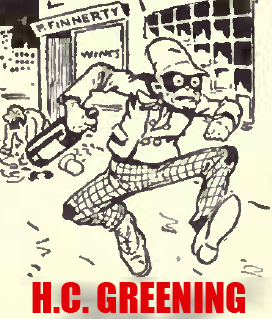 I love this guy. H.C. (Harry Cornell) Greening -- forgotten today -- was a screwball master of the first order. He wrote and drew numerous short-lived comic strips and Sunday features from about 1900-1920. He also did a slew of magazine cartoons and illustrations.

Greening could draw funny. He seemed to be able to get inside his character's heads and depict their screwball actions with total sincerity. They have no idea they are comic  drawings -- they think they are real, and that their endeavors are serious. And yet, when Greening draws, for example, a burglar fleeing a cop, the look of sheer focus and all-out pedal-to-the-metal hustle in the crook's face and body language is pure screwball.

Another interesting aspect to Greening's work is that his sensibility is subversive and his metier is anarchy. One of the things I admire most about his work is that it's edgy -- often pushing the boundaries of propriety and good taste. His drawing style is disarming --  he could do cute, cherub children as well as any children's book illustrator of the day. You glance at his work and you expect treacle -- you read it and you get comics that are made with the same sensibility of Plastic Man in the 1940s, Mad in the 1950s, and American Underground comics of the 1960's.

I first discovered Greening while sifting through a pile of hundreds of crumbling old comics. I had never heard of him before (and -- as yet -- know little about him or work, yet) -- but when I first encountered an example of his 1909-1910 comic, The Woo Woo Bird, I was hooked.

The premise of the Woo Woo Bird is simple: a cute talking bird (who usually announces himself: "I'm the Woo Woo Bird")suggests actions to people (usually children) that seem like a good idea, but when they do them, disaster incurs. The strips usually end with the enraged victim on their way to find and kill the Woo Woo Bird. One can only admire the truly awesome skill of the prankster bird. In this example, he teaches a young girl how to spell:


It seems to me that there is some sort of cultural, if not direct, lineage from the Woo Woo Bird to Bob Clampett's Daffy Duck to Woody Woodpecker (who resembles the Woo Woo Bird). In any case, there's a guilty pleasure in the way The Woo Woo Bird laughs at the gullibility of not-so-smart children. Adults are also the prey of the "mischevious" Woo Woo Bird -- to the point where the man in the following strip is literally driven mad.


According to Allan Holtz's American Newspaper Comics: An Encyclopedic Reference Guide (University of Michigan, 2012), The Woo Woo Bird ran for just 3 months in early 1909. However, the Barnacle Press folks, those devoted rescuers of great old comics, have on their website some Woo Woo Birds they date from 1910. You can find 13 of these gems here -- all wonderful, wacky reading.

Allan Holtz has more on H.C Greening at his Stripper's Guide site here. In this page, Allan Hotlz shares a rare scan of a 1904 Greening comic called Jocko and Jack that is a precursor to The Woo Woo Bird, with a malicious, non-talking monkey creating the havoc.

Greening's biggest success was a full-page Sunday comic called Percy - Brains He Has Nix that ran from October 1, 1911 to January 12, 1913. This comic revolved around the chaos created by a life-size "mechanism man" named Percy. Time Magazine, in a 1930 article, described the premise of the strip:


"Cartoonist Harry Cornel Greening equipped his creature with a row of buttons down the back which, when pushed, set Percy to his tasks. Only trouble—and chief source of comedy—was that, being brainless as well as tireless, Percy would keep on doing whatever he started until someone pushed another of his buttons. "

You can find 36 of Greening's Percy pages, extracted from black and white microfilm, at Barnacle Press' site here.

The Glen Bray studio made at least one Percy cartoon in 1916. Greening himself, in a 1937 letter to author Ida Tarbell, briefly recapped his career and singled out Percy as a highlight. 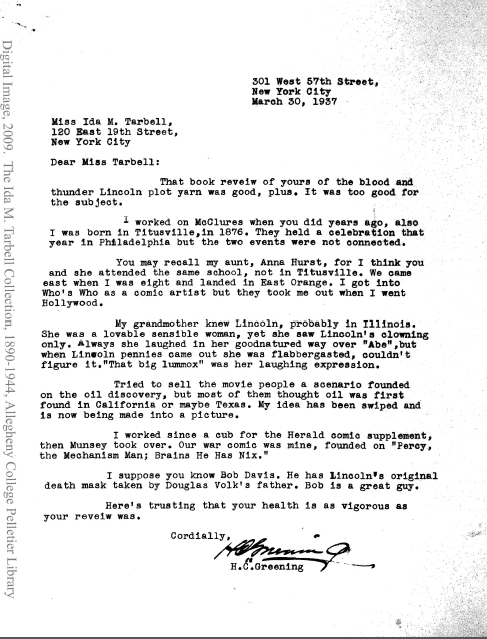 Harry's cartoons push the boundaries of good taste -- as in his cartoon, "From the Pupville Press," in which a sausage maker laconically, and somewhat horrifically comments on the contents of his product: 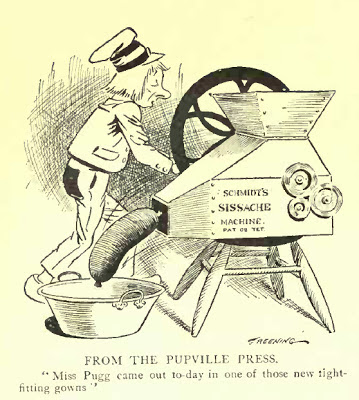 In another cartoon, a young pup sees a hot-dog shaped balloon and thinks it's a dog-angel -- the joke being that hot dogs are where stray canines wind up: 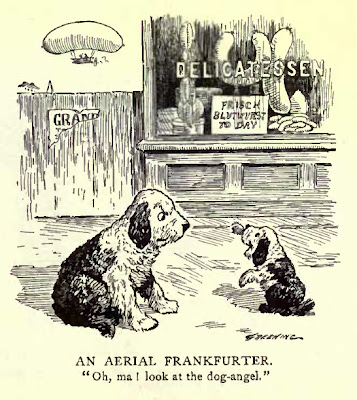 In a Thanksgiving-themed cartoon called "Hard Luck," Greening wickedly delivers a gag panel that is, in effect, a hit-and-run assault on good taste (although the turkey might taste good): 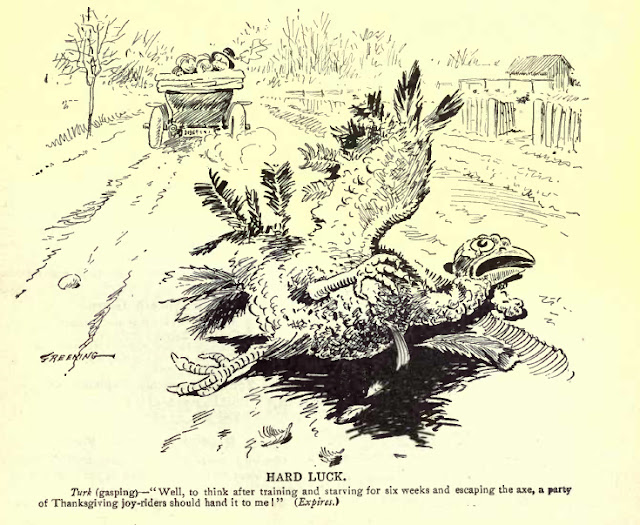 To be fair, the decade of the 1900s recycled out-of-control automobile cartoons, getting years of mileage from the general citizen's wariness of those horseless carriages. Surely this example, with its final stage direction of "(Expires.)" is one of the most off-color.

Another thing I admire about Greening's work is that he is just such a dad-blamed good artist, manipulating light and shadow, pen-stroked textures, and perfect facial and body expressions. On top of all that, his ability to render virtually anything in any scene allowed his to work with a broad visual canvas. In his cartoon "Submarine Sadness" Greening dives for a virtuoso presentation of an undersea diver. The fish have the same manic cuteness as The Woo Woo Bird. 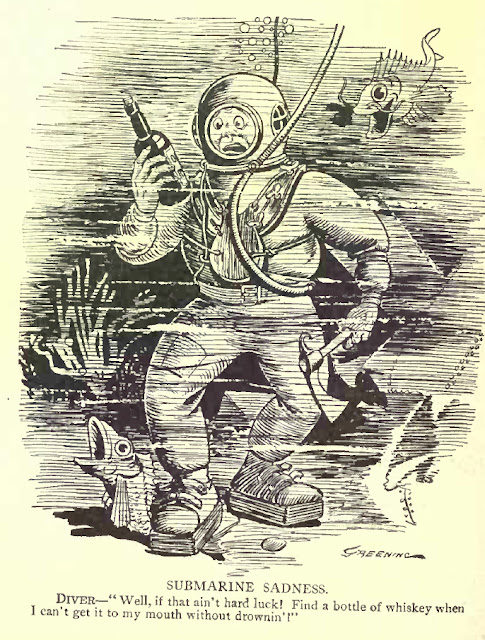 In "Those Mountain Resort Girls," Greening builds a gag from a cliff-hanger situation. 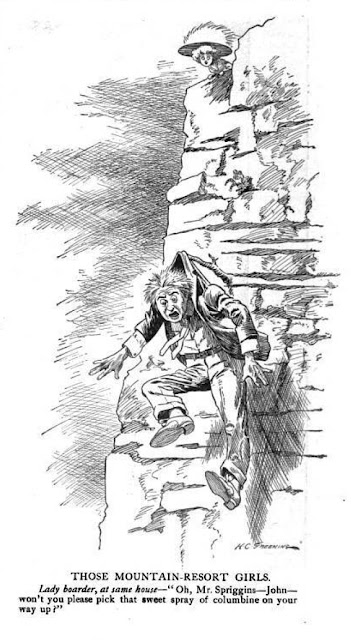 In "Illustrated Expression," he creates a man out of straw (that is, a "straw man"). 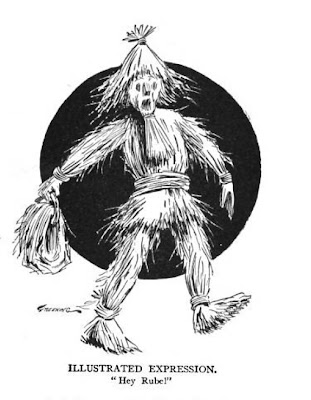 In his cartoon, "After the Thanksgiving Meal," Greening expertly renders the interior of wealthy home. Check out that snobby butler -- and the snappy writing! 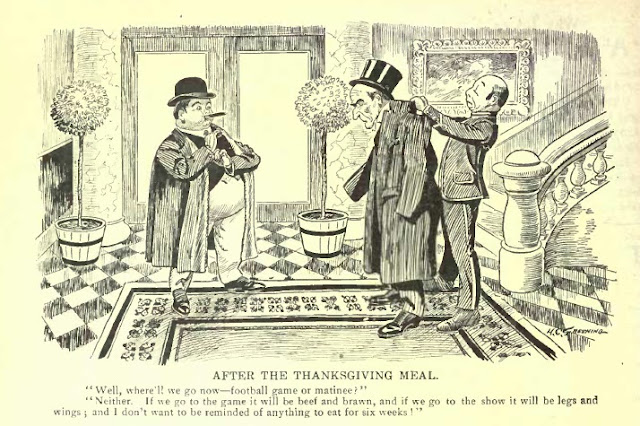 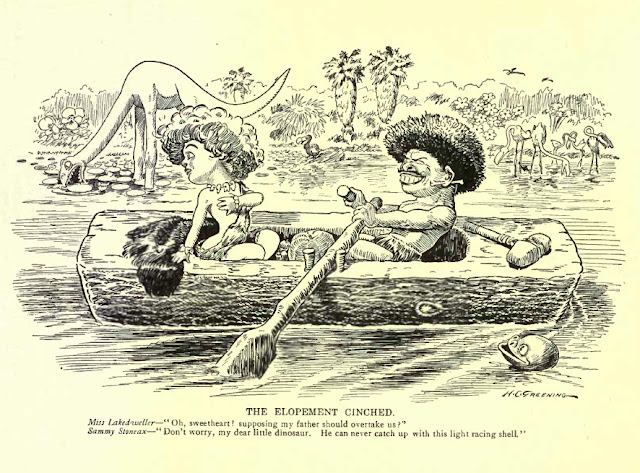 Or this intriguing editorial cartoon: 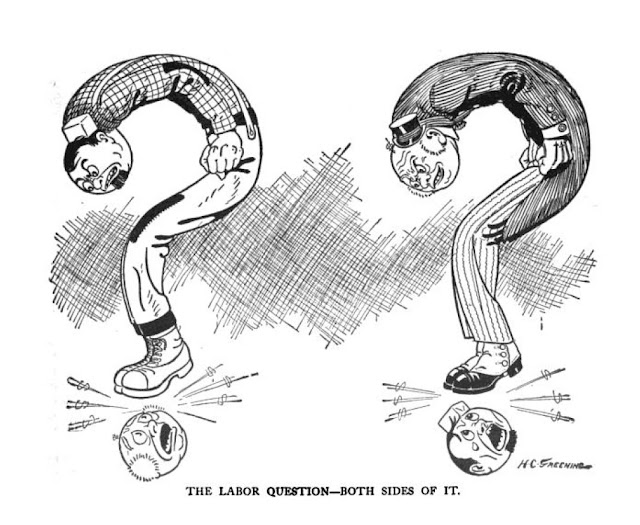 More than his variety and expertise, and more than his screwball-anarchic sensibility, Greening also had a flair for innovation. Percy, his comic strip about a crazy robot was novel and innovative for 1911.  Perhaps the most interesting of Greening's work that I've seen, however, is his wordless cartoons -- what he called "moving pictures on paper." Years before this was common, Greening broke a single page into a grid of 18 small panels and played with the time signatures of the strips. In some cases a strip of panels showed incremental action, comically portraying "freeze-frame" moments of panic and chaos. The effect is similar to slow motion in a movie. In other strips, Greening jump cuts the scene with startling humorous effect. This is D.W. Griffith on paper!

The caption for "The Pie-ous Tramp's Triumph" provides the reader with directions on how to read this odd cartoon: "Rube the eyes rapidly along each row from left to right. If you do not find the pictures moving it must be because you are not easily moved." Of course, this was purely a joke, since there is much more happening here than just a novelty representation of movement.

As with H.M. Bateman's wordless, multi-panel cartoons, Greening's pages are filled with funny drawings. The work is similar in spirit to Milt Gross, who accomplished the same thing, but with a drunken, hyper scrawl. Incredibly, Greening's "Balloon Ascension" offers even greater chaos: 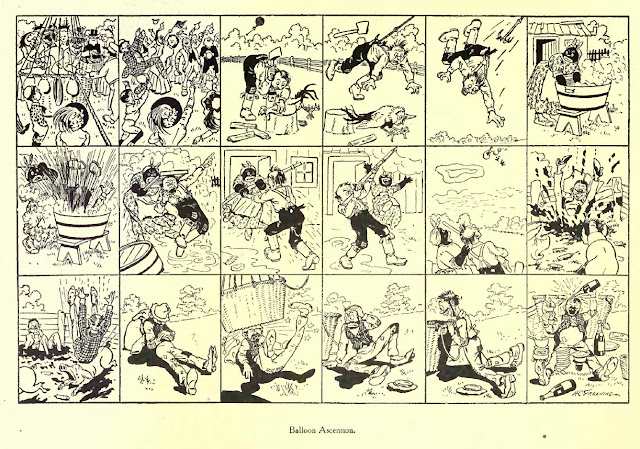 The jump cuts in the above comic, between panels three and four, five and six, and thirteen and fourteen are masterful.

John Adcock has shared more H.C. Greening on his website here, which I recommend to you.

Greening is in the top ten of early American cartoonists that I would love to research more thoroughly. I hope this little article has helped to reveal his place as an early master of screwball comics.