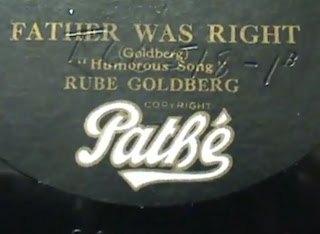 Presenting the earliest known recording, by far, of Rube Goldberg's voice. In 1917, Rube Goldberg sang on a record. The song, which he also wrote, was "Father Was Right." I'm pleased to present this rare recording to you, with some background information.

At the time he made this novelty record, Rube Goldberg was 35 and one of the the most respected and beloved cartoonists in America. His fame and widespread popular acceptance allowed him to expand his talent and humor beyond the printed page. In 1910, he started a five-year career as a stage performer on the east coast Vaudeville circuit.  He appeared as himself, and drew cartoons to amuse audiences. In 1914, he produced, wrote, and starred (again, as himself) in a Vitagraph film, "He Danced Himself to Death."

Rube also had a musical side. In 1912, he published "I'm the Guy," a popular song that was based on his hit comic strip of the same name. In the years that followed, Rube would write and publish many songs. Some of these were recorded by name artists, such as Rosemary Clooney (who recorded "Willie the Whistling Giraffe" in 1951, a song co-written by Rube Goldberg and C.F. Patterson -- the wife of Rube's friend and fellow cartoonist Russell Patterson ).

The only known instance of Rube himself creating a commercial recording of one of his songs is the 1917 Pathé record, "Father Was Right." The actual sheet music was published in 1916, and featured original Rube Goldberg cartoons:

The song was based on Rube's cartoon series, "Father Was Right," which he rotated through his daily cartoon space in newspapers with several other series and one-shot comic strips. Rube had a special relationship with his father, Max. His mother died when Rube was very young, and his father, a banker and later the sheriff of San Francisco, raised Rube and his siblings on his own. Rube stayed close to his Dad all his life, visiting often and calling upon him to negotiate his business deals and syndicate contracts.

The strip followed the same basic formula each time. In panel one, a father provides his son with sound practical advice. The son ignores it, gets into comical trouble, and in the last panel he comes to realize that "father was right!"

The irony of the strip is that Rube's father wanted his cartoon-crazy son to become a mining engineer, and put him through the University of California for that purpose. Max felt that an engineer was a secure and good living. Upon Rube's graduation, Max pulled some strings and git him a job working the City of San Francisco, designing their sewer system (imagine that!). After six months, Rube could no longer contain himself and squirted out of his well-paying job into a career as a newspaper cartoonist at a substantially reduced salary -- in effect ignoring his father's career advice. Of course, you know the rest of the story -- Rube became a huge success. In fact, when he recorded "Father Was Right" in 1918, he had a millionaire's salary, in today's money.

The "Father Was Right" comic strip saw heavy rotation in 1917 and 1918. Rube also created a companion strip, "Mother Was Right." This one ran much less often. "Mother Was Right" was always drawn in silhouettes -- the only strip in which Rube Goldberg used this visual approach. Perhaps it was Rube's way of acknowledging his mother, Hannah, who had tragically passed away at age forty-four when he only nine years old.

The 1917 Pathé recording of Rube singing is priceless. We are indebted to "MusicBoxBoy," the collector who made this available at YouTube. Unfortunately, Rube was recorded poorly, and the production standards for making the Pathé discs were considerably less than perfect. However, with some concentration, it's not too hard to make out the words Rube is singing-talking.

It's worth the effort to listen closely through the hiss and pops, because Rube delivers a richly comic performance. He's not a trained singer, and the song lacks aesthetic beauty -- but as comedy, it's golden. Rube adds a layer of humor beyond the funniness of the lyrics by starting out with a great, big, rude, mock throat clearing. Between verses, he repeats the throat clearing, at one point muttering an aside: "I'm suffering as much as you." Then, the act of saying this has thrown his timing off and he stops in mid-word, and says dryly, "wrong again" and waits until the music comes around the right place before he starts in on the last verse.

We can also spot Rube recycling some of his material as he uses a verse from this song in his October 11, 1926 daily strip, shown below. Luke, of "Luke and His Uke" usurps a piano performance of a Beethoven composition, as he sings: "His wife's relations came to eat/In droves of tens and eights/And so he said, "I guess I married/The whole United States." A person in the audience exclaims, 'Wot a talent!" Rube may have been poking fun at himself with this in-joke, since his one commercial performance as a singer, while quite funny, probably never made Caruso break out in a sweat.

All in all, this is a wonderful find, and I'm pleased to bring it to you. Herewith, without "father" ado,  is Rube Goldberg's 1917 recording of his song, "Father Was Right," with the lyrics transcribed below. 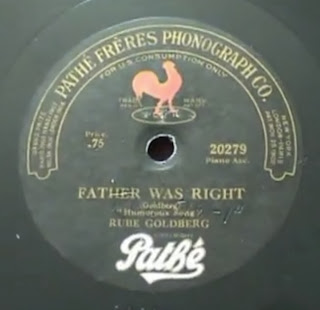 [Clears throat]
When I told my Dad
That I made up my mind to wed
"Pick out a girl," he said
"Whose relatives are dead."
Little did I know the wisdom of my dear old Dad
I didn't wed an orphan,
But I wish to the Lord I had!
Father was right
Father was right
My wife has cousins by the dozen
(line garbled)
They all get here at supper time
And bring their appetites
They wear out all our spoons and plates
They come in droves of tens and eights
I married the whole United States --
Father was right!

(Throat clearing - aside: "It's getting worse")
One day I told my Dad I'd like to own a motorcar
He puffed on his cigar
And said, "You won't go far"
I bought a car to show him that I knew a thing or two
I said goodbye and turned the crank
And that's the last I knew...
Father was right
Father was right
Now my flivver* has my liver
Twisted out of sight
And when I hear an auto horn
I want to start a fight
My back is stiffer than a board
The springs have cut me like a sword
Does anyone want to buy a Ford?
Father was right!

(Throat clearing. Aside: "I'm suffering as much as you")
One day I -- (realizes he is out of synch with music - Aside: "Wrong again")
Father said move to the country where the zephyr blows
For quiet and repose
Where they have no picture shows
Now I know that father wasn't talking through his hat
There's a moving picture theater right beneath our little flat!
Father was right
Father was right
Now my family's at the movies morning noon and night
My wife's so used to darkness, I'm afraid to make a light
Her only friends are on the screen
Instead of good old Pork and Beans
She seized me movie magazine (?)
(clears throat) Ahem! Father was right

(Throat clearing) In -- ahem -- other news, the new book THE ART OF RUBE GOLDBERG (which has my editing and writing in it) has been getting gangbusters press and flying off the shelves. It's appeared on numerous top 10 lists. This little-known little rag called The New York Times did a wonderful piece on the book, which includes a very clever and fun video they made especially for the online article. It's great to see Rube in the public eye again!

That is All,
Screwball Paul
Posted by Paul C.Tumey at 5:10 PM