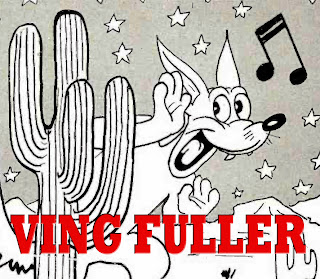 Ving Fuller is what you get when you turn a hustling American entrepreneur into a screwball cartoonist.

I never cease to be amazed at the number and variety of schemes the man created to sell his cartoons. While he successfully placed cartoons in the nation's leading magazines and newspapers, Fuller didn't settle for this, and hustled his way into many other markets, including animated films for Glen Bray, movies, and advertising. He even made (and patented) a toy and sold it through his comic strips.

Fuller never broke big with a comic strip property. He came close in 1934 when he created the first Betty Boop related comic, but appears to have been stymied by a legal snafu. He tried again a few years later in 1939 when he drew Elza Poppin, a comic strip loosely named after a smash Broadway and film screwball hit, Hellzapoppin. Ving lost the job after six months (according to one story, he attempted to sue the owners of the play for royalties on the strip, and was thrown out of court and a job) and he was replaced after six months by fellow screwballist George "Swan" Swanson (Salesman Sam).

Ving finally had success with his 15-year old comic strip, Doc Syke (1945-1960) but it remained on the fringes of newspaper comics, hopping from syndicate to syndicate. Ving constantly tinkered with the strip to make it sell better, even going so far as to re-tool the strip in the early 1950s to become a doppelganger of the then new Peanuts comic strip by Charles Shulz.

As a persistent media archaeologist, my never-ending search for Ving Fuller material is rewarded more often than I'd expect. His eccentric cartoon art turns up in the oddest places. Such as in a 1940s radio trade magazine. I recently discovered a series of about two dozen delightfully screwy comic strips by Ving Fuller promoting advertising time to media buyers ("timebuyers") for the New York radio station WOV.

A lot of the ads in this magazine used cartoon art, but none of it was one-tenth as screwball (or interesting) and Fuller's work. The earliest example I found is from August, 1944:

The image at the top reminds me a little of Basil Wolverton, in that Fuller is making comedy out of an ugly character. The juxtaposition of a photo with the line art is also attention-getting, in a goofy way. Fuller's WOV ads were aimed at people who worked for advertising agencies. Many of these agencies provided clever creative print and radio ads to their clients, and so it was necessary to use the same sort of offbeat, hip advertising to gain their attention and win their confidence. In this work, Fuller sits firmly (if obscurely) in the tradition of Rube Goldberg, Dr. Seuss and Virgil Partch, iconoclastic cartoon stylists who provided their services to the world of print advertising.

Unlike Goldberg, Seuss, or Partch, Fuller was not necessarily a "name" cartoonist. He wasn't associated with a popular newspaper character (although he does work in his character Doc Syke into one of the ads). This meant that he had work even harder to make the ads funny and entertaining -- while at the same time promoting "timebuying" opportunities. This was no easy feat, and sometimes his ads were a little soft, although the cartooning was -- as always -- authentic and pleasingly nutty:

Apparently, someone at WOV liked Fuller's work. They hired him for about two years and made him the star of their trade campaign, as this squib from the December 10th, 1945 issue of Broadcasting shows:

Ving Fuller was as iconoclastic in his own profession as his more famous brother, Sam, was in his profession as a film director. What is really interesting to me about Fuller is that his sense of humor is as offbeat as his schemes for selling his cartoon art. Here's a wonderfully weird example:

And here's a smokin' idea for a four-pipe, er, four-PANEL strip. Check out the array of crazy pipes in the background, and the "P.S." gag in panel one.

The last example in the series that I can find is, in some ways, the wackiest of them all, with the artist putting himself into the trade ad. Perhaps Fuller knew his contract wouldn't be renewed, and so he decided to wring a little self-promotion out of the piece.


It could be that mentioning his name in his comics turned into an in-joke. I haven't seen enough of Fuller's daily and Sunday comics to know for sure. However, I have run across a sequence in Al Capp's Li'l Abner from 1959 that features Ving Fuller's name. Abner is excited that to become "a highly paid cartoonist like "Ving Fuller or Walt Kelly!"

This is your friendly neighborhood media archeaologist, Paul "A Real Screwball" Tumey, signing off!

All text copyright 2013 Paul Tumey. My work may not be reproduced or used without written permission. Sorry, but that's the way it is. Feel free to link to this article and promote me, however. If enough of you readers promote me, I may someday become a highly paid writer, like Ving Fuller! 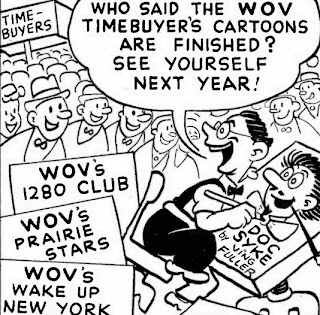