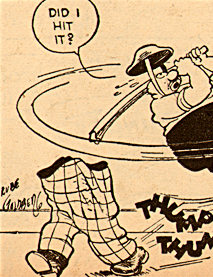 Just FOO you, a run of 16 extremely rare Lala Paloozas, Rube Goldberg's last screwball story-comic, scanned from my own collection.

Lala Palooza (created 1937-38) is a delightfully kooky strip, far underrated by modern readers. The key to appreciating the comic lies in reading it in sequence. Goldberg is playing with situation- and character-based comedy, which has a slow accretion over the dailies and Sundays. You can only appreciate the shining pearl of Goldberg's layered situation-comedy when you read the series in sequence, as is the case with many of the great newspaper comics.

Goldberg created Lala Palooza in 1937, after a dormant period following his loss of interest in his successful Doc Wright (1934-35) daily strip. Goldberg's only straight dramatic strip in his 66-year career, Doc Wright depicted, in Little Orphan Annie fashion, the melodramatic ups and downs of a good-hearted country doctor. It was a bold and surprising move for the nation's most famous humor cartoonist to  create a daily soap-opera. It's as hard to believe as if The Marx Brothers played Shakespeare with no puns or harps. Reading Doc Wright, one keeps looking for a lovesick midget in the background, a parrot, or at least a man with an impossible mustache. When Doc opens his bag, we hope he will pull out a ridiculously complicated device for testing a patient's reflexes. But Rube played it straight for seven months, and beautifully so. Doc Wright, counter to any expectations, was as suspenseful and compelling as any dramatic story-strip of its day. It has an intensity that, combined with Goldberg's perfected craft, makes it a surprisingly good read.

Rube's well-crafted, earnest story-strip went over very well with an ever-increasing readership, winning over 100 newspapers. After 24 years in the business of comic strips, Goldberg knew very well what the public wanted. But after several hard months of no pratfalls, no goofy names, not a single mad inventor, or any absurd situations at all -- Rube apparently lost interest. It seems that Wright was wrong for Rube.

For the first time since beginning his career in 1904, Rube's creative prowess waned and for a period of about a year, no new cartoons issued forth from Rube's drawing board.  A new story-comic began to develop. Slowly, new characters and comic situations emerged in Rube's imagination. After several quiet, dormant months, Rube unveiled Lala Palooza.  He named his new comedy strip after a slang word meaning, "extravaganza," perhaps signalling he wanted to pull out all the stops and produce a great comedy series.

We appreciate Rube Goldberg today for his nutty inventions and screwball comics, but we forget that he was also an excellent storyteller. Lala Palooza combined everything Rube knew about constructing an episodic screwball comedy narrative, and threw in the kitchen sink, besides.

Lala Palooza was distributed by the tiny, obscure Frank Jay Markey syndicate. Not much is known about Markey, except that he came from the McNaught syndicate, and he also distributed Ed Wheelan's Big Top, and Boody Rogers' Sparky Watts. Goldberg, once the star cartoonist of his time, had fallen in stature as a new generation of cartoonists had come along. In fact, just before he started Lala Palooza, Goldberg was offered the chance to take over Sidney Smith's strip, The Gumps -- an offer that must have appalled him greatly. There must have been a despairing sense, for Rube, that newspaper comics had shifted away from his type of humor.

Goldberg's Palooza has never been presented in a coherent form to the public, which may account for its low standing. You'll notice there are no dates on the dailies below. Different papers ran the strip at different times. I've found the same episode running in one paper in 1937 and in another paper in 1941! To make matters even more confusing, the Sundays were more or less randomly reprinted out of sequence in various comic books published by Quality Comics (Feature Comics published the most strips), and later issues even featured non-Goldberg episodes drawn especially for the comic books (the same problem exists for Ed Wheelan's Big Top). It would be a difficult but worthwhile task to locate and re-assemble Lala Palooza into it's original intended continuity.

Perhaps because the publishing of his continuity-based comic was so chaotic, Goldberg's next syndicated comic was Rube Goldberg's Sideshow, a Sunday page stuffed with one-shot gags. This format lent itself to the new business model much better than a continuity strip. However, Goldberg seemed to have storytelling in his blood, and soon created one last slight shaggy-dog screwball episodic story (Brad and Dad) that was embedded into the three-ring gag circus of Sideshow. 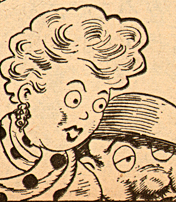 With Lala Palooza, Goldberg was ambitiously attempting to deepen both characterization and continuity in the screwball format. His biographer, Peter Marzio, wrote in 1973 that Lala did not make the grade and was "a step backward into the past." (Rube Goldberg His Life and Work by Peter Marzio, 1973, Harper & Row) With the passage of more time, a new appreciation for this fine, forgotten screwball comic can be cultivated. The comic features some of his funniest and most yclept characters. Lala is a wide-eyed, corn-fed, buxom blonde obsessed with status. Her sleepy-eyed brother, Vincent, is a Wimpy-like inventor and laze-about. Together, they encounter a dizzying array of screwball types and absurd situations. Rube's restless imagination conjured up one goofy scenario after another.

What Lala Palooza  may lack in the type of anarchic energy we usually expect in screwball comics, it makes up in the quality of it's eccentricity. Peter Marzio writes "the Goldberg-styled furniture and architecture, the slam-bang antics of Lala, and those beautiful names (Professor Zeero) signaled another Goldberg coup."

As with many of Rube's comics, Lala Palooza drifted around aimlessly after losing its initial head of steam. Perhaps Markey's business model deep-sixed the series. Or maybe it was just Rube's pattern. Bill Blackbeard wrote that Goldberg was "the San Francisco cartoonist who spent the undeniable talent to produce at least one great comic strip on half a dozen less than properly accomplished and sustained works over a long and busy lifetime." (Bobo Baxter, 1977, Hyperion Press).

Here, then, is a helping of one of those half dozen works.

(Since the strip ran at various dates, I haven't included any dates here. In my set of strips, the first episode in the run below starts on August 11, 1937.)

In the next episode, Vincent creates a classic Rube Goldberg screwball invention. In short order, Goldberg would give one out of six episodes over to his beloved and popular nutty inventions.

The characters introduced here turn out to be two very eccentric crooks. If anyone would like to see more of this continuity, please leave a comment or write me: paultumey@gmail.com.

Entomology note: The word "lalapalooza" means 'extravaganza,' or 'over the top.' In 1990, a series of successful rock concerts adopted the name, leading to an entire generation that uses the "-palooza" suffix to mean "a big, amazing, super-special deal." An early use of the word is recorded from 1898, so Goldberg didn't invent the expression - but he certainly positioned it for popular usage, as he did with several other expressions and words.

This concludes my Big 50 event in which I've published 50 rare screwball comics in this blog in one week to celebrate my 50th birthday! We now return you to your regular programming...