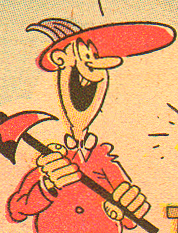 Holman came to Smokey as a foo-ly developed cartoonist. By the time he created his classic screwball comic at the age of 31, Bill Holman had written and drawn his own syndicated comics for eight years from 1922-30 and then sold hundreds of gag cartoons to magazines during the next five years from 1929-34.

When he heard the Chicago Tribune - New York Daily News Syndicate was looking for a new Sunday page in late 1933, Holman (who was living in New York) took some of the firemen-themed magazine gags he had been selling (and also his jowly kitty) and fashioned them into a Sunday comic about screwball firemen, which took off, blazing.

Holman's first stint as a daily newspaper cartoonist, however, did not distinguish him as a notable cartoonist. I think this was in part because he was suppressing himself to be commercial. His first strip was an idiosyncratic funny animal strip first called J. Rabbit Esquire and then Billville Birds. Here's a couple of examples that show the characteristic Holman love for puns and background details, but very underplayed:

Then Holman tried a kid strip, Gee Whiz Junior. Again, it had touches of the Holman screwball approach, but in a subdued way. Here's a couple of examples:

We'll take a closer look at Holman's early comics in a future article. After several years on Junior, Holman moved into magazine cartooning where he began to find himself as a screwball cartoonist. As Holman said in an  interview with John Canemaker (available for reading at the official Smokey Stover/Bill Holman website):

"I was just being myself in my cartoons  -- that was the whole thing. I'd had quite a bit of experience at various papers and syndicates, and when you find that your stuff's appearing before the public in a big national publication, you get confidence." (John Canemaker, Millimeter - date unknown, circa 1970s)


We'll also take a look at Holman's magazine cartoons in a future post. Having finally developed his cartooning style and screwball sensibility, Holman seized an opportunity to take another dance on the stripper's stage. It seems that the fireman idea may have been suggested by News publisher Joseph "Captain" Patterson, who took as keen an interest in his syndicate's comics as William Hearst did in his line-up.


Here is an early, if not the first announcement/solicitation the Tribune-News syndicate circulated to newspapers for the comic. Note that the cat is already named Spooky. Note also the name of Arthur Crawford. Holman credited Crawford in some interviews as being the first to contact him about the opportunity to develop a new comic for the syndicate.


This example of strip is in the "tab" (tabloid) format, which was a smaller, full page format. I wonder if this was the first page that Holman drew on that chilly Indiana Christmas Eve, or if they perhaps selected from his built-up inventory a year or so later, to select an early, but solid first strip. In any case, as with most newspaper comic series, this first appearance is noticeably different from the high-octane insanity that most of us associate with Smokey Stover.

Another point to note in the comic above is that Holman draws his signature jowl-cheeked, tape-tailed cat in seven of the 12 panels. Holman was also inserting this kitty in his gag cartoons. Although the early Smokey comics lack the density of the later strips, Holman is already working to create multi-tracks of gags. In the strip above, we have the main gag about the chair legs, and then there's the funny business of the goofy cat, who is not an essential part of the joke at all, but still adds a lot to the comic.

Here's the second appearance of Smokey Stover (again, just called "Smokey"), from March 17, 1935. This example is in the half-page format, which uses fewer panels (3 tiers instead of 4).


Foo some reason, the image in the last panel reminds me of Don Martin's comics. Maybe it's the way the "honk" sound effects are drawn. There are a few items in the background, and Chief Cash U. Nutt is smokiing that wonderful two-bowl pipe in the title panel (the smoke from his pipe appropriately forms the title, creating a visual pun). Still, overall this comic is sparse and tame, compared to what it would become. It's not yet the "torrent of audacious gags" that the Tribune-News promised. Spooky appears in panels two and eight.

In the fifth Smokey Stover comic to be published, Spooky gets his own strip. Here, then, is the very first Spooky comic strip!

If you are in New York this weekend (April 28 and 29), be sure to visit Carl's table at the Museum of Comic and Cartoon Art (MoCCA) Festival.

Smoked Links
You can find more excellent Smokey Stover and Spooky comics at the following links:

My page on Bill Holman - just updated as of this post - many rare items not found anywhere else on this blog!

I hope you enjoyed this look at the birth of Smokey Stover and Spooky. In future posts, I'd like share with you more of Holman's early comics, and some of his magazine gag cartoons. Until then, you can find me in room...