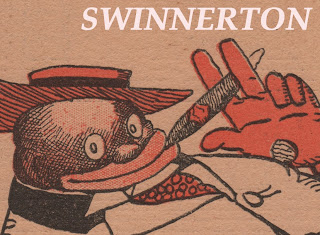 Born in Eureka, California. In 1892, Swinnerton began his career as a staff cartoonist for Hearst’s San Francisco Examiner, where he produced a popular weekly cartoon, The Little Bears (1893-1897). He moved to New York in 1896 to work for Hearst’s Journal-American, where he created Mount Ararat (1901-1904), Mister Jack (1903-1906), and his longest-running strip, Little Jimmy (1904-1958). In 1906, Swinnerton was diagnosed with a fatal case of tuberculosis. His friend and publisher, William Randolph Hearst, sent him to Colton, California, where he recovered and fell in love with the American desert. He became a noted landscape painter and died in Palm Springs, at the age of 98.

The nuttiest of Swinnerton’s early comics is Sam and His Laugh (1905-1906) an infectious series featuring a job-seeking black man who gleefully laughs at the hypocrisy and pomp of society.  While Sam is drawn in the typical black man stereotype common in early 20th century pop culture, it’s clear that Swinnerton sides with him as an instinctive hero of disruption who tears down the walls of social order with a bellylaugh – exactly what humor comics are all about.

What follows are a few examples of this remarkable strip which art spiegelman has observed works like a laughing record-- 78s  popular in the early 20th century that contained nothing but the sound of someone laughing. It was impossible not to listen to these records without succumbing to laughter. Similarly, it is well nigh impossible to read Swinnerton's SAM comics without smiling.

In this strip, Sam starts out with his customary statement: "I seen yo' ad in dep paper." He finds much joy and amusement in the unintentional truism embedded in a stuffy church hymn.

Sam tries his hand as a waiter. Maybe if he was in a diner, he could keep a straight face, but the pretension of the fancy French menu does him in... 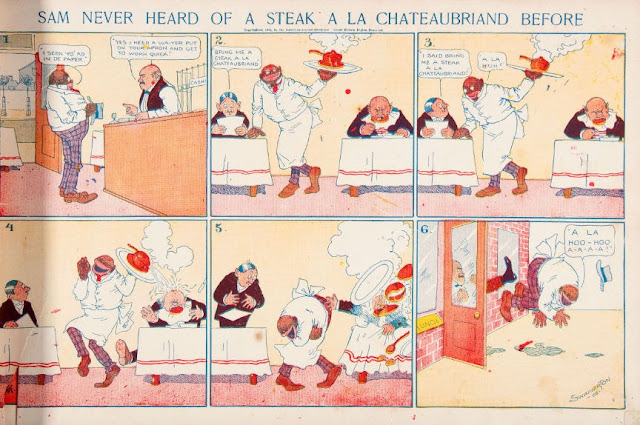 The above comic came from the one and only book collection of Sam strips, a hardcover, 48-page color book published in 1906 by the Hearst outfit (one of several collections they published of their popular comics): 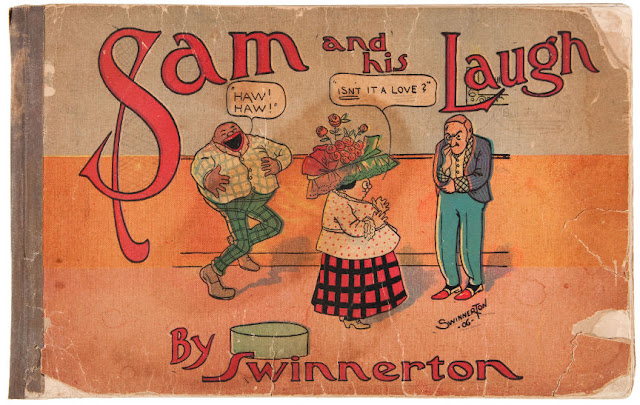 Here is the waiter SAM strip from above, as it was published in the newspaper on March 12, 1905:

In another train strip, Swinnerton pulls out all the stops and shows us Sam's wife and children -- all of whom share his keen sense of absurdity:


Though forgotten today, Sam was popular in his time. He gloriously adorned the cover of a 1905 sheet music folio: 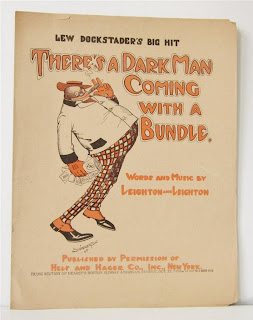 You can listen to a 1905 recording of this remarkable song, "There's A Dark man Coming With A Bundle" here:

I'll leave you with one last SAM, which features a portrait of Swinnerton's colleague, cartoonist Rudolph Dirks, who created the hit comic "The Katzenjammer Kids." Note in the last panel that Dirks signed the strip with Swinnerton -- indicating this strip was a "jam." 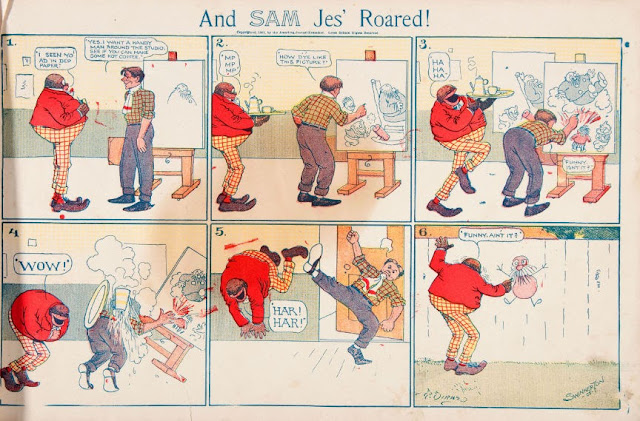 I am pleased to note that the astounding new book, Society Is Nix: Gleeful Anarchy at the Dawn of the American Comic Strip 1895-1915 includes a SAM strip (the very first one!), as well as several other incredible color comics pages by Swinnerton (including more jam pages!). These are all printed in their HUGE original size. You can learn more about this book, which includes over 150 stunning comics, great essays (I wrote one), and lots more here. 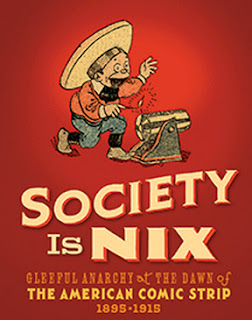