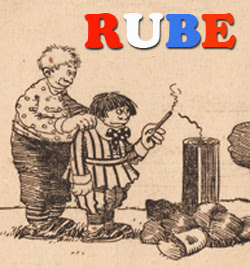 As you probably know, Rube Goldberg was born on July 4, 1883. To my knowledge, Rube never trumpeted his own birthday in his daily cartoons, but he always seemed to make a special effort in his work for the Fourth.

To celebrate the 4th and Rube's birthday, I've scanned from my own collection his strip from July 4, 1918, which features a surprisingly nice pen-and-ink sketch of Uncle Sam, and a really funny gag panel drawing of two kids wary about lighting a giant firecracker. The original strip measures 15 inches across -- which was Rube's regular space allotment in newspapers from 1909 to about 1920, or so.

The cartoon I have for you today needs a little context. In July, 1918 the United States was deeply involved in World One One, also known as "The Great War." The war had been going on for nearly four years. It would end just four months after Rube penned this cartoon. Nine million soldiers died during the conflict, and many more were maimed and psychologically damaged. This war saw technological "advancements" in weaponry that led to horrific carnage.

Ernest Hemingway was an ambulance driver in the conflict, in Italy when this cartoon came out. He was seriously wounded and sent home. Hemingway's first published novel The Sun Also Rises (1926), is centered on a character who is impotent and emotionally destroyed after serving in the war. His 1929 novel, A Farewell to Arms is drawn from his experiences in WWI.

Rube's stock-in-trade was screwball humor and funny drawings. It must have been a challenge for him to figure out how to fit his work into a bloody, deadly serious conflict. In the case of his July 4, 1918 cartoon, he eschewed humor (mostly) and delivered a sprightly editorial cartoon, abutted by a holiday-themed episode of one of his panel series, Slackers:

That's the German Kaiser portrayed on the left. Rube had been cartooning about the Great War since the conflict's first days, in 1914.. In fact, he began as an unplanned observer on the front lines. In 1913, Rube had made his first successful tour of Europe (paid for by his newspaper employer, The Evening Mail) and dispatched a series of popular cartoons, "Boobs Abroad," humorously recounting his experiences. Rube was probably feeling on top of the world in the summer of 1914, the following year, when his paper again sent him on an all-expenses-paid tour of Europe. Everything was going as planned until, a few weeks after his arrival, World War One broke out.

Rube changed the subject matter of his cartoons and columns sent back home from the light-hearted experiences of a tourist to that of a humorist observing the chaos and confusion of a war's early escalation. The result was a remarkable series of cartoons, such as this one, entitled "If You Are On The Ground, Naturally You Can Understand The War Situation More Thoroughly."

These cartoons were collected into a book, with some of Rube's Twain-like prose writing. The book, more of a pamphlet at 32 pages, was called Seeing History At Close Range: The Experiences of An American Cartoonist Marooned In France During the Outbreak of the Present War. Rube was into really long titles around time.

In the book's introduction, Rube makes it clear that he had no intention of minimizing the horrors of the war."In preparing these stories and cartoons I have never for one instant lost sight of the tragic side of this terrible conflict which has brought sorrow to the hearts of thousands of good people in the warring countries."

He goes on to write, "If I succeed in drying a tear or two without sacrificing the ideals of human feeling I shall be able to look the Statue of Liberty in the face and write her telephone number down in my little red book."

Rube was stuck, for a time, in the midst of the conflict in France. He needed to produce official documents to the military authorities in order to return to the United States, and he had none. Finally, in desperation, he brandished a dentist's bill he found in a suitcase, and managed to pass it off as an official government document, which resulted in his safe passage home.

In the next few years, Rube worked tirelessly to raise money for the war effort, often performing the sketch act that he perfected in his Vaudeville tours. He returned to Europe just three months after the war ended and, on February 29, 1919 published a column (few realize that for much his career, Rube penned a newspaper column as well as daily cartoons)  in which the great humorist allowed himself a moment of sober reflection:

"I can add little to the numerous camera and word pictures you have seen so often. But there is one thing that the camera cannot give you. It is the choking sensation you get when you see a small wooden cross alongside the road out there in the wilderness marking the spot where one of our boys gave all he had to give to keep the rest of us clean and free."


Years later, in 1938, Rube moved from his daily humor strips to become a Pulitzer-Prize-winning political cartoonist. As we see here, he was unafraid to step away from humor once in a while earlier in his career and pen a patriotic war-themed cartoon for the Fourth.

For more of Rube's Fourth cartoons, see last year's article on the subject: Rube Goldberg On The Fourth of July.

Shameless Plug Department: I have begun a new column, Framed!, for the online magazine, The Comics Journal. My first column is called The Lost Comics of Jack Cole - Part One (1931-38). I invite you to check it out.