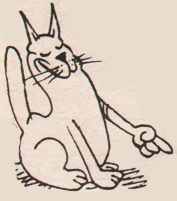 An in-depth screwball comics essay by Paul Tumey on the occasional Sunday!

The 1980s to present-day comics of New Wave cartoonist Steve Willis are high-octane wackiness that embrace many elements of screwballism. They are surreal, funny, exaggerated, crazy, playful, and subersive, (not to mention Steve is another loose-scrawl screwballist). Plus, Steve can draw funny. Check out that great cat drawing on the left.

You get the sense reading his twisting, winding, totally unpredictable stories that Steve is totally in the moment as he makes these -- they are barely channeled explosions of the chaos of creativity. Instead of directly working in a tradition of screwball comics,  which Steve may or not have absorbed into his psyche, I think he probably taps into the same sources that served many of the older screwball artists and thus his work is related. It's a sort of "pure" screwballism. The ever-shifting, dreamlike, cosmic-absurdist world of Morty the Dog is a neighboring county to Gene Ahern's Foozland and Bill Holman's nonsensical fire station.

Steve came along in the small press explosion of the 1980s. He was one of the most accomplished auteur-cartoonists who published their comics in photocopied pamphlets sold and traded through the mails. In fact, back in the day, Steve and I traded our comics several times. he was kind and encouraging to me, and an inspiration.
A lot of cartoonists who published their work on photocopiers worked in what is known as the mini-comics format. This is a standard size (8.5" x 11") sheet of paper, copied on two sides, cut in half and then folded and stapled together to make a small 8 page pamphlet. The form was a way for broke cartoonists to afford to self-publish, since it only cost about a quarter to make a copy. The form was also a way to put some helpful limitations around making comics. In some ways, mini-comics are to comics what the short story is to literature. At the recent Univeristy of Chicago symposium Comics: Philosophy and Practice, Art Spiegelman praised the short from of comics, calling our attention to this in an age dominated by graphic novels. The mini-comic is a short form that, unlike a one- or two-page story, allows for covers, a centerspread and page turning, so it's a slightly different sandbox. Here's a link to one of my extremely humble mini-comics traded with Steve (also a 24-hour comic) from 1989, The World Seen Through Mr. Foster's Glasses.

Steve lives in McCleary, Washington, an area that gave us Kurt Cobain and Robert Motherwell. On May 26, 2012, Steve will host his second annual Mini-Comics Day. Here's a flyer for the event: 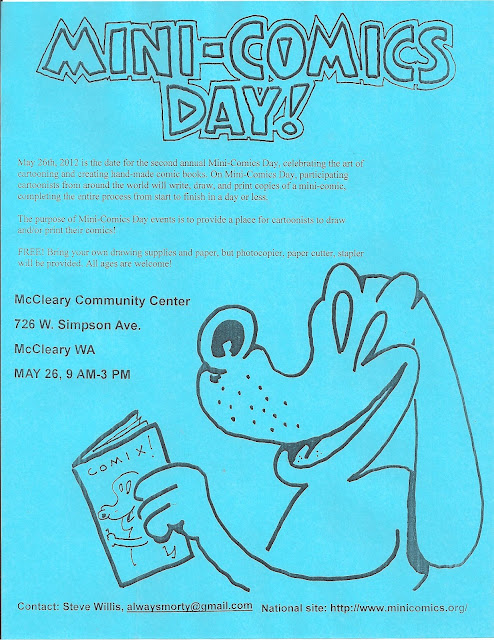 In celebration of this upcoming event, I decided to share a few of Steve's comics with you.To find some rare Willis, I've excavated my small stack of browning and foxed Seattle Stars. These were small, semi-regular newspapers published in the late 1980's by Michael Dowers (Starhead Comics, Brownfield Press) with paid ads that were distributed for free in the Seattle area. 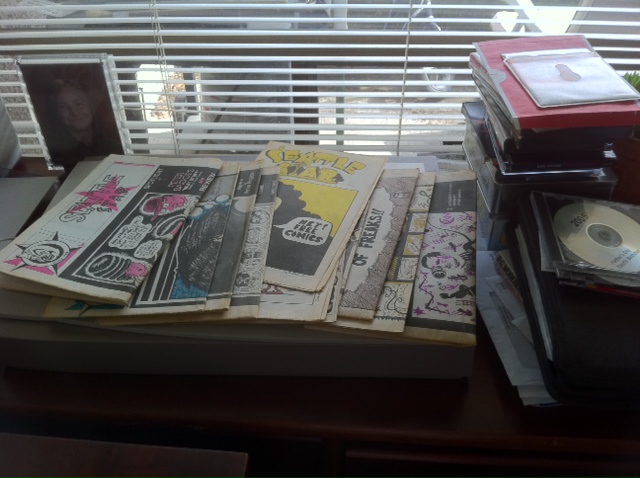 I bought my set of Stars directly from Michael when I lived in Boston. The issues are filled with great work by seminal cartoonists including Lynda Barry, Michael Dougan, Peter Bagge, Robert Armstrong, and Steve Willis. Here's the back cover to Seattle Star #2 (December 1985):


Steve's comics go places few others ever have, including multiple levels of liberating meta-awareness. In the 1987 comic below, he plays with the very idea of comics being lines on paper:

Steve also plays with the other aspect of comics, words, as in the Seussian Queasy Quandry or Quantum Quibble? reproduced below:

Even when he's philosophical and truth-telling, as many screwballists from Rube Goldberg on are, Steve is also wacky and funny, as we see in his 1988 comic, Martyr City, U.S.A.

Lastly, here's one of my favorite Willis stories, How Cats Got That Way, a mind-bending extended narrative by Steve from Seattle Star 15 (1988), featuring his main character, Morty the Dog. This is a great example of how dreamlike and marvelously weird Steve's longer narratives tend to be. It's also a comic that anyone who's had a cat in their life will appreciate. 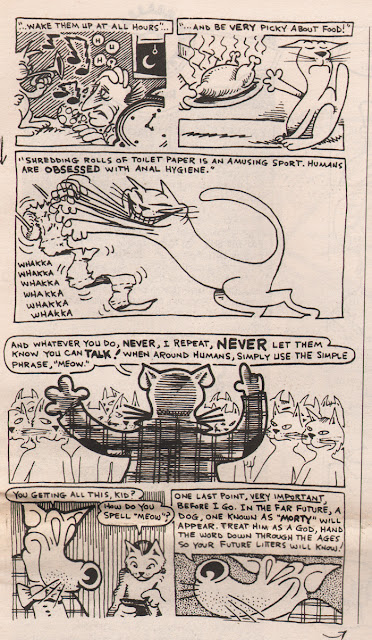 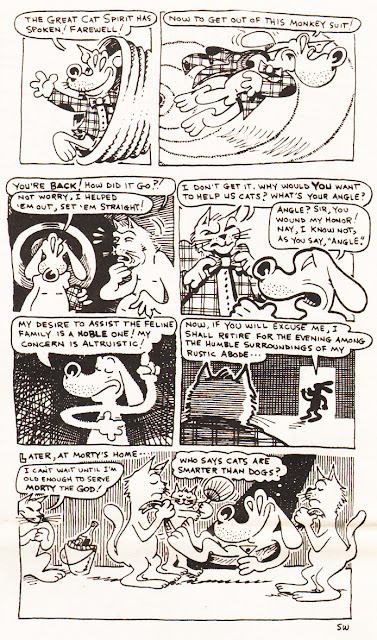 So far, Steve Willis has created 2,538 individual, unique issues of Morty Comix.  He distributes the single paper version in interesting ways, leaving them in someone's papers in a local cafe, slipping  in a street-side newspaper box, and so on.

Note: Steve has posted many of his comics on his great Morty the Blog, but they are a little hard to find on the blog. Below is a partial list of his published work and, whenever I could find the work republished online at Steve's blog, I've created a link to it. The comix were originally self-published (in the best New Wave tradition), unless otherwise indicated. Enjoy!

Be sure and visit Steve's Morty the Dog blog (which Steve calls Morty the Blog) where you can learn more about his beautiful, screwy comics and his art.

And, if you are in Washington, I hope you'll consider attending Mini-Comics day -- come join Steve and make a comic!