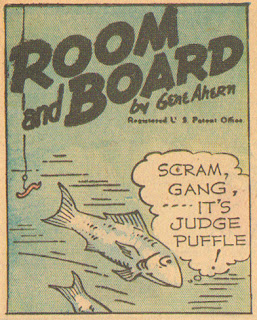 I'm hooked on Ahern's unique combination of wit and screwball surrealism. Yep. Fell for it hook, line, and sinker.

Ahern's surreal comic masterpiece, The Squirrel Cage, was a topper for a less fanciful strip called Room and Board. Ahern began the strip in 1936, when he was hired by King Features Syndicate to create a copy of his popular Our Boarding House.

At first glance, it's hard to see the lure of Room and Board. It looks simplistic, and seems a not-quite-as-good version of Major Hoople. Reading it, though, I've come to see it's wonderful stuff that grows on you. There's a magic to the slow daily accumulation of character and situation that happens in some comics (and TV shows), and that magic is present in Our Boarding House and Room and Board. Once in a while, there are some amazing standout episodes of R&B when Ahern drifts into the adventurous waters of his SCREWBALL imagination with strips such as the lessons in icthyological surrealism in this post. Consider this screwball taxonomy: 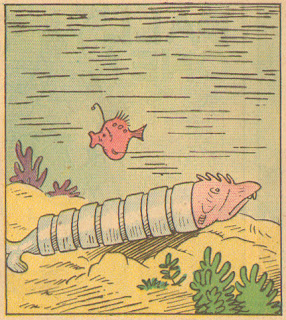 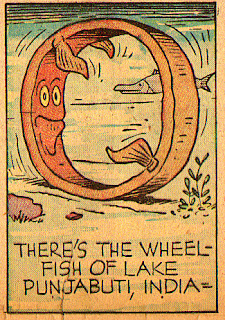 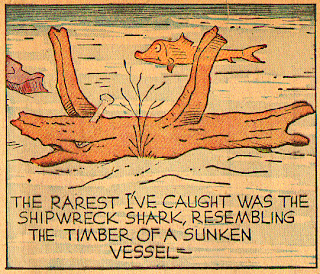 In 1943, Ahern wrote a short continuity where Puffle's braggadocio extended to insane fish stories told to a highly amused visitor to his boarding house. "He's magnificent" thinks the visitor to himself as he eggs Puffle on to ever-higher flights of fancy. Judge Puffle's puffery is offset by his vivid imagination and W.C. Fields' like delivery.

I find these strips to be wonderfully creative and fun. They remind me of Harvey Kurtzman's Hey Look comics. I hope you take the bait and check 'em out!

Gene Ahern recycled the "Puffle fish story" concept a few years later. This time, the Judge tells his stories to The Earl, a wealthy, child-like professional wrestler who dominated the strip through most of the 1940's. Delightfully, the telescoping fish makes a rare second appearance.

Email ThisBlogThis!Share to TwitterShare to FacebookShare to Pinterest
Labels: Gene Ahern: Room and Board, Thursday