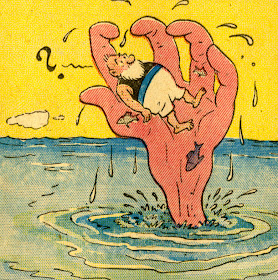 Welcome to SCREWBALL COMICS, the new blog by Paul Tumey!

Do you like your comics filled with hi-octane mixes of nutty comedy and sublime surrealism? If so, then here's a new blog to dish it up! And, as the followers of my other comic art related blogs -- Cole's Comics and Comic Book Attic (with Frank Young) -- know, I'll be offering up some tasty commentary and informative notes, as well.
I can think of no better subject for our SCREWBALL launchpad than a look at some prime examples of Gene Ahern's legendary surreal Squirrel Cage (1936 - 1953).

Here are three examples from at least a two-year Sunday and daily continuity in which Ahern explored an imaginary place called Foozland. These examples extend the surrealism of screwball comics into territory few others have ventured. This is an extraordinary continuity in Ahern's long career in comics. George Herriman had his "Tiger Tea" continuity in Krazy Kat, and Gene Ahern had "Foozland" in The Squirrel Cage.

Above: Reality is torn down and reassembled in the mysterious world of The Squirrel Cage. "I'll put a spell on his meat block" is a dreamlike obscurely risque reflection of Ahern's mind -- he worked as a meat-cutter and in fact was discovered as a cartoonist by the cartoons he made on butcher paper - he did put a spell on the meat block... with his pen and the magic of comics. Look at how the narrative shifts in the last two panels. The Great Wizard of Foozland has disappeared into the Earth in the 7th panel and the continuity extends for two more panels with the baffling appearance of an icebox and a midget Eskimo. The last two panels could be from any time and place, before or after the previous narrative. The connective tissue is the link between the icebox and the meat. This is pretty neat stuff, folks!

Above: Mythologically, this strip falls somewhere between Bibilical culture and modern cartoonist Ben Katchor's imaginary cities. Surreal details such as this episode's blue tree, strange costumes, and and underground river that gushes from a man-made opening are both the visual background and the conscious focus of The Squirrel Cage. Nothing is explained, but everything has an internal logic that the citizens of these ever-shifting landscapes know all-too-well.

Who in the Foo was the guy that made this nutty strip?

That's what I asked myself when I first stumbled upon these windows into another reality.

How is it possible that stuff like this was ever published in mainstream papers? It's otherworldly weirdness is enough to shake one's very conception of the world of our forebearers. If stuff like The Squirrel Cage appeared in mainstream American newspapers in 1945, well: there must have been some pretty cool people back then!

And why in the world isn't there more of Gene Ahern's work available in print and on the Web?

Gene Ahern (1895-1960) created a number of screwball comics, including Squirrel Food, Otto Auto, and The Nut Brothers (Ches and Wal). His most popular creation, Our Boarding House, was a toned-down version of his screwball approach, being a character study of a puffed-up old eccentric windbag, Major Hoople.

Ahern had a hit with Hoople, scoring a 14-year run at the Newspaper Enterprise Association syndicate (NEA) from 1921-36.  Here's a rare bio of Ahern at the height of his fame that appeared in a 1934 issue of Literary Digest, with a photo and drawing of Major Hoople done especially for this article.

Just two years after this article appeared, the rival King Features syndicate hired him away1936 at twice his already considerable salary (note in the article above that Ahern made enough to collect the art of old masters). Gene took over the moribund Room and Board for King Features, a copy of his old NEA strip. To make matters even more conFOOzing, someone else had created Room and Board before Ahern got to it, and the strip was a copy of Ahern's Our Boarding House! In future posts, I'll look at the strip before and after Gene Ahern was lured to it.

Even though it was business as usual with the main strip, and Ahern was confined to to his tried-and-true formula, you can't keep a good nut from cracking, and Ahern created the brilliant, enigmatic Squirrel Cage as a topper for the Sunday Room and Board. For those that don't know, a "topper" was a second strip created by the same artist. This allowed some newspapers to just print the main strip and save space for advertising , and others to devote a whole page to the artist, depending on how popular their work was to that paper's readership (or how few ads they had sold!).

Here's a couple of 1937 Squirrel Cage episodes that show the surrealism developing in the first year of creation. It ain't Foozland, but it's close!

The above examples of Ahern's strip are very different from the three 1945 examples.

As this example from a couple of years later demonstrates, Ahern had clearly hit a wellspring of lyrical surreal comedy. If he wasn't in Foozland yet, he was slouching towards it.

This next example, from a couple of years later, in 1941, shows the strip's main plot device circa 1939-41: two guys trying to get rid of the little hitch-hiker.

I have one more example, again from approximately a couple of years later into the strip's run, in 1943:

Perhaps the above example is a fluke, but it seems to me the strip had drifted into the doldrums by this time. And then, something brilliant happened... Ahern decided to journey to an imaginary land shaped entirely by free association and subconscious thoughts.

Somewhere between 1943 and 1945, Gene Ahern seems to have stepped fully into his dreamworld. Apparently, the little hitch-hiker tried for at least 8 years to get a ride, or an answer to his question, or perhaps both. The Squirrel Cage -- and presumably the hitch-hiker -- lasted for another 8 years, until the strip ended in 1953.

I am currently researching when the mysterious Foozland continuity started, and how long it ran. There is nothing like it in comics!

One clue I have right now is this scan of an Ahern Squirrel Cage original dated November 16, 1947 in which the little hitch-hiker crosses frontier of Foozland into Skoobozia:

Thus, the Foozland continuity ran at least until July 6, 1947, probably longer. And, sadly, that's where the trail currently ends.

The little hitch-hiker (who was the model/inspiration for Robert Crumb's Mr. Natural, by the way) often says much more than "Nov shmoz ka pop?" In the above strip, we not only get more of his bizarre Slavic-tinted muttering, but also an English translation! 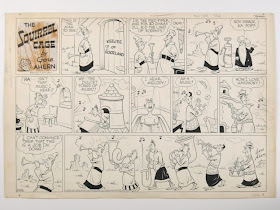 In this episode, the Pied Piper knocks on the door of the Keejee of Foozland and offers to rid the land of rodents for ten zinkas. He winds up flushing out a quintet of music-loving middle-aged men. In the next-to-last panel, the unhappy Piper says "I can't convince them this is a job I am doing." The strip reads like a dream metaphor for a cartoonist's life.

I am currently digging around for more examples and information on Gene Ahern's fascinating Foozland story. Hopefully, in time, I will turn up more to share. If anyone out there has additional examples, please contact me at paultumey@gmail.com.

By the way, long-time seller of great comics, Ken Pierce, offers a "fanzine" style collection of 36 Squirrel Cage Sunday strips. I  think these are pre-Foozland, but I'm not sure. I recently ordered it and will review it in a future post. In the meanwhile, if you are interested, here's a link to Ken's site. I've ordered from him for years and can vouch for his service and the quality of his products.

Many acrorns of thanx to I Love Comix, which supplied the 3 sublime 1945 examples of The Squirrel Cage and introduced me to Foozland!

In the coming months, we will explore Gene Ahern's career and work, along with many other masters of SCREWBALL COMICS!